New Column by a Biker With MS 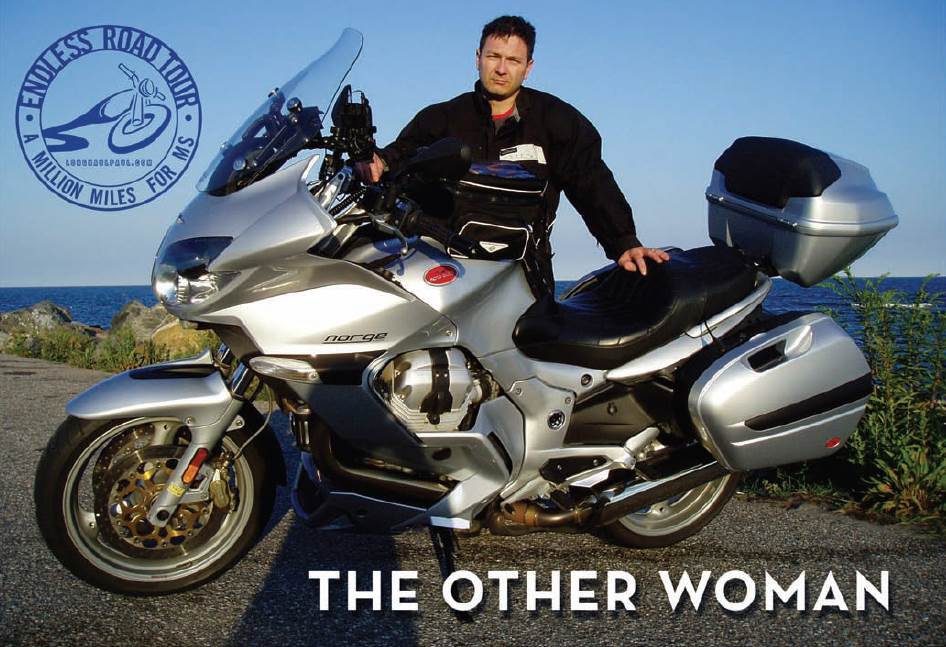 Most men’s midlife crises involve something fast and shiny-or there’s another woman. My midlife crisis involved being diagnosed with multiple sclerosis, an autoimmune disease that affects the brain and spinal cord. Along with the meds I was prescribed, I decided that my therapy would include a million mile motorcycle journey. I chose to embark upon this long-distance crusade to raise awareness about my condition, which affects more than 2 million people worldwide.

I received my diagnosis eight years ago, not long after I had asked my girlfriend, whom I’ll call E, to be my wife. That’s when our dream of happily ever after popped like a balloon. In fact, I told her that I would not blame her if she chose not to marry me; building a life with a man who has an incurable, degenerative illness is a lot to take on. But E stuck it out.

Though I had retired from competing in motorcycle endurance rallies two years earlier, I was afraid that there would come a time in the near future when I would no longer be able to return to my first love: motorcycles. So the day that I was diagnosed, E encouraged me to buy a touring bike and start riding again. She even let me take the bike on our honeymoon, barely showing signs of jealousy, even as I continued to have “affairs” with eight other bikes after we got married!

Throughout the years, I’ve felt guilty driving so far away to MS events and fundraisers. Closer to home, I didn’t own up to the fact that I had a disease because I feared losing friends, not to mention my job, though deep down I knew that someday I would have to face the truth-and share it with those in my inner circle.

In early 2012, I began to expand my thinking on this matter. I attended a few MS events, listening to speakers who seemed to be doing marvelous things despite their disease; in fact, they were involved in some of those endeavors because they had the condition. They were not afraid to go public, and they used their diagnosis to make a difference in the lives of others. After a while, I realized that I had that power, too, and began to feel that I had something special to offer.

The more I thought about it, the hotter the fire in my soul burned. I wanted to find a way to raise awareness and money for MS. I thought about setting a motorcycle world record, and then doing public appearances about the challenge that I’d taken on, while encouraging others to tackle goals that they’d abandoned since receiving their diagnosis.

By traveling the country on some extreme rides, and setting world records along the way, I could raise money and shine a broad public light on the challenges and difficulty that people with MS face every day. I would quit my day job, earn money as a speaker and sell ads on my website. I would hit up my old sponsors for bike gear, and get press through my contacts. It was a fool-proof plan. I just had to convince E.

I began to build my Longhaulpaul.com website and had E read some of it; she was supportive, but asked me to remove any mention, or pictures, of her online.

She had no idea who was reading this stuff, and was anxious that I might reveal something that would hurt her professionally, so I honored her request.

Later, however, when I had a business plan, dates for my MS rides and speaking engagements, and was featured in a national magazine (ABILITY), she could see that my dream had evolved into reality. Unlike my nonstick tape invention-patent perpetually pending-this was not just another one of my dumb ideas.

I often make light of my MS. But embarking on this epic journey represents a significant shift in my life. It affects my friends, family and coworkers more than I would have imagined. For instance, telling the CEO of my company and my colleagues that I had the condition and planned to spend much of the time ahead riding for the cause, made them concerned; they wondered if I were physically healthy enough to attempt it. And while they offered their support, I think they preferred I not embark on this quest.

The decision to dedicate the next decade of my life to MS affects E more than anyone. I often plan in my head and forget to include her through all the stages of the idea. Every hour not spent doing my job is dedicated to riding or preparing for the next ride. Financially, it’s like losing my job, but without collecting unemployment.

The decision to dedicate the next decade of my life to MS affects E more than anyone. I often plan in my head and forget to include her through all the stages of the idea. Every hour not spent doing my job is dedicated to riding or preparing for the next ride. Financially, it’s like losing my job, but without collecting unemployment.

I love my wife dearly, and I’m aware that I need to spend more time with her, and not take advantage of her patience and support. I know there have been times when she’s felt neglected. She also fears that once I’m in full swing with this project, she’ll be left alone, holding down the fort. I need to make sure I spend quality time with her as often as possible, because without her I couldn’t do any of this.

It took time but eventually E realized how important my mission is to me, and why I had to undertake it; she let me know that if I am willing to risk this much, she is willing to risk it with me. She is behind me, supports me and helps me chart this course as we roll out a new future together. Yet, we’re both aware of the various things that can go wrong when you ride a million miles with MS.

E was responsible for talking me out of calling the Endless Road Tour, Lil’ PP’s Big Adventure. She also expressed concern about me posting a picture from the 2003 Ironbutt checkpoint, which she calls, “Paul in Drag.” I tried to explain the humorous story behind it, but she never got the joke. It all started with a discussion group post I made about wearing inexpensive thrift store clothes on long trips, because I could throw them away after a few days, given that space is limited on a motorcycle.

After that, I posted the out-of-style, out-of-date and outof-this world clothing that I had picked up second hand. That spontaneously started the Paul Pelland Clothing Drive, which inspired fellow riders from around the country to send me their worst thrift-store finds.

Funky clothing donations flowed in for about six months, and then somebody upped the ante: I couldn’t just collect ugly outfits; I had to wear them while riding in the famous Ironbutt Rally. The “fashion show” ended up being a big hit at the checkpoints that year. I wore every item of clothing they sent me-except the wedding gown. A man has got to draw the line somewhere.

Recently, when I told E that I was coming out of the closet about my MS, she begged me not to print that either. I promised her I would not, so please forget that you ever read this paragraph.

Our finances, our retirement plans, and our security are all up in the air. There is so much that she could and should be angry with me for, but unbelievably she is not. I know she worries about what I’m attempting to do, but she hangs in there, which makes all the difference, because I could not do this without her support and love. I would walk away from my 25-year affair with riding motorcycles-and now the Endless Road Tour-if E asked me to, because I’m so lucky to have her.

There are days when MS fatigue gets the best of me, and I slump helplessly into the La-Z-Boy. At these times, it’s all I can do just to eat dinner. My bones and muscles seem to separate from my brain, and I feel fried. That’s when I put down my to-do list, and put off looking at e-mail, but E is there, massaging my neck and back, offering to help with anything she can. She tells me how far I have traveled and assures me that tomorrow will bring renewed energy. She reminds me that I do have MS, and it’s okay to just stop, and do nothing for the night. As she kisses my forehead, smiles and assures me everything will be okay, I believe her.

Traveling so many miles along our nation’s highways gives me lots of time to reflect. It’s taught me that life is a GPS system, and our paths are forever being recalculated. If you are lucky enough to have a midlife crisis like mine, you may find that the detour proves more interesting than the route you had laid out.

I love E, my “other woman,” much more than all the motorcycles a man could own, and although I spend a lot of time with my “harem” in the garage, it is E, my beautiful wife, to whom I always return, and to whom I dedicate my journey.