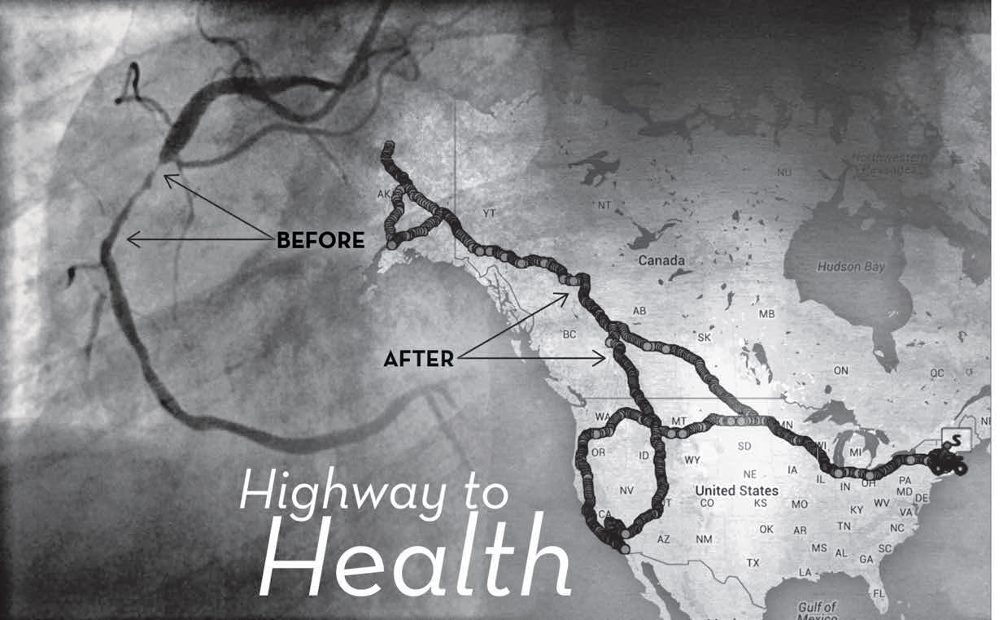 It was a simple text, yet it was the start of a life-changing experience. “Hey Paul, do you want to speak in Anchorage or Fairbanks?”

I’d been receiving invitations to speak at events in California as part of a West Coast tour this past June, but riding my bike to Alaska had been on my must-do list for over a decade. It remained the only state on the continent I had not visited by motorcycle. It was hard to believe the message was real. I kept dreading the call saying that riding my motorcycle 4500 miles from my home in New Hampshire to Anchorage was not approved, but the call never came and my Wheels Out West for MS Tour now included Alaska!

I had two months to prepare for this once-in-a-lifetime adventure, and I was equally excited to be sharing my story with hundreds of people living with multiple sclerosis (MS) in eight different cities over the three-week period. I had five days to make the trek to Anchorage, then six days to find Las Vegas. From there, I would visit the Southern California cities of Escondido and Beverly Hills. The following week I would head north, visiting San Luis Obispo, Visalia, and San Francisco, and then up to Eugene, Oregon before heading home.

I spent many hours planning my routes and making sure my Yamaha and all my gear were up to the challenge. After all, just the base route alone was about 13,500 miles and that was a lot of miles for one month—even for me! I turned the event into a fundraiser and had people try to guess my final miles for the month of June.

I try very hard not to think about how MS can foil my plans, whether they are just to walk around the block or ride across the continent.

The surprise wrench in my travel plans, however, was not MS related and really caught me off guard. A mild chest pain

I had been experiencing for about a week would normally have been ignored, but realizing I would be riding in some very remote areas without services, or even the ability to call for help, gave me reason for concern. Realizing the pain seemed to happen more often during strenuous activity finally sent me to my primary care physician one week before I was supposed to leave on my monumental adventure.

I’ve never had heart issues or very high cholesterol. I eat well and work out regularly. I’m not overweight, and I don’t smoke, but I do have a family history on both sides of cardiac disease. An echo-cardiogram showed some abnormalities, and a stress test was ordered. I wasn’t in cardiac arrest, so I was sent home with the instructions, “If it gets worse or happens more often, get yourself to an emergency room right away.” My health insurance company authorized a test scheduled for the following Wednesday, the day before I was supposed to leave for Anchorage. I explained that I needed to find out what was going on sooner, so it could be taken care of because I was not canceling my trip. While my insurance company hemmed and hawed, I came up with my own plan.

On Sunday, five days before I needed to be on the road to make the Anchorage event, I mowed the lawn, packed my bike, swapped my tires, and showed my wife Elin where all the cash was hidden. I then explained to her that I was going to INDUCE myself by running up and down the stairs, and that after my chest pain materialized she should drive me to the emergency room. I calmly explained to her that they would have to admit me, do the stress test on Monday, fix me on Tuesday, and release me on Wednesday, just in time to start my trip to Alaska. My wife is an amazing woman and probably wanted to rip my heart out and beat me over the head with it at this point, but reluctantly she followed along.

The plan worked flawlessly. I experienced the chest pain, she drove me in, and I spent my first night since my birth in a hospital. I failed the stress test the next day and needed to undergo a catheterization to determine which artery was clogged, and how they would go about fixing it. I was scheduled for Tuesday morning. My only concern remained, “Will I be able to go to Alaska on Thursday?” I was told flat out “No” and “Probably not” by everyone in a white coat, but I remained confident I would still be able to hit the road. I was about to embark on the trip of a lifetime, and I wasn’t going to let anything keep me from going, so when I asked the lady bringing my lunch if I should take a trip to Alaska, and she said “why not”, I counted that in my favor. For the three days I spent in the cardiac ward, I tried not to think of the work that went into organizing the tour for me, or the repercussions of having to cancel it. I was sure I might never be asked to speak again, and I would never get the chance to ride to Alaska. Canceling my trip was just not an option I could think about. Even if I had to zip-tie an IV pole to my motorcycle, nothing was going to stop me!

Tuesday morning, while they were wheeling me down the hall for the procedure, I joked that they better not remove the wrong leg. A doctor passing us laughed quite loudly. “The wrong leg, now that’s funny,” he said.

Moments later, I officially met my cardiologist, Dr. Fink, for the first time. The procedure was mere minutes, but they found my right coronary artery was 99 percent blocked. Two stents were inserted end to end to open up the vessel and restore blood flow to my heart.

When Dr. Fink stopped in later that afternoon to check on me, I asked how soon I would be able to travel, as I was supposed to leave for Alaska in two days. He said if I did not have any complications or issues in the next couple of days, he saw no reason I could not travel. “Take it easy, no driving for 48 hours, no heavy lifting for a couple of days,” and as he was walking out he added, “Your stents won’t be detected in those metal detectors either. Enjoy your flight.” They do say riding a motorcycle is the closest thing to flying, so…………

Next issue: Part Two – Clogged Arteries to the Arctic Circle