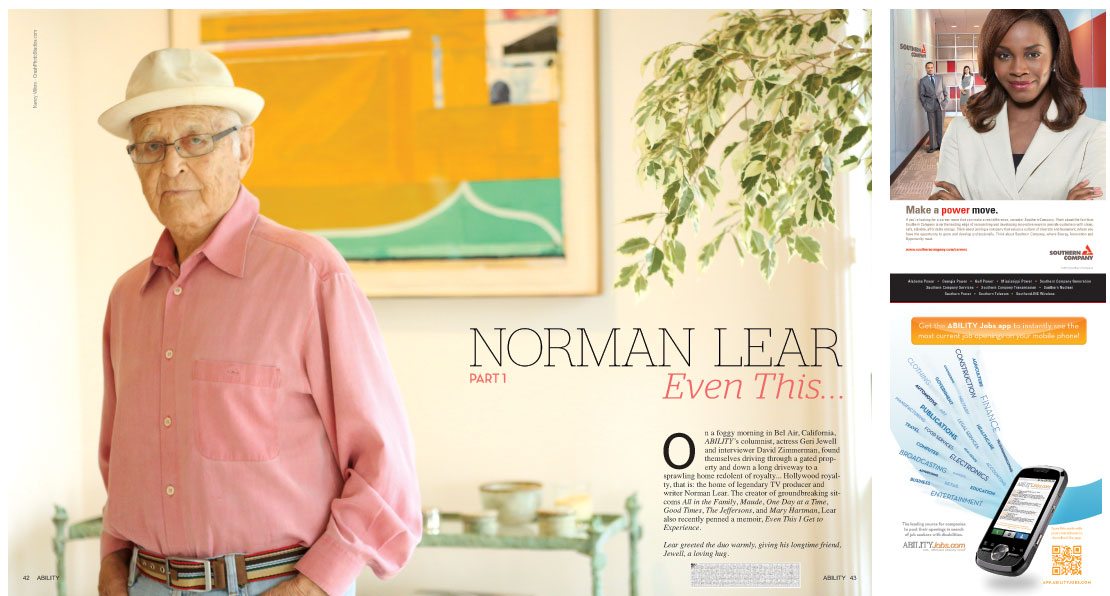 On a foggy morning in Bel Air, California, ABILITY’s columnist, actress Geri Jewell and interviewer David Zimmerman, found themselves driving through a gated property and down a long driveway to a sprawling home redolent of royalty… Hollywood royalty, that is: the home of legendary TV producer and writer Norman Lear. The creator of groundbreaking sitcoms All in the Family, Maude, One Day at a Time, Good Times, The Jeffersons, and Mary Hartman, Lear also recently penned a memoir, Even This I Get to Experience.

Entering the home, they were greeted by a beautiful woman named Monica who asked if they would like a cappuccino to start the day. As the camera crew busily set up lights and sound, the trio sat down to reminisce about their history together, their shared joy of making people laugh, and Lear’s early days in Hollywood. By all accounts, it was “all in the family” time.

Geri Jewell: Thank you for this interview, Norman.

Norman Lear: Even this I get to experience.

Zimmerman: He said, “Please give Norman a hug.” And he said, “I keep on thinking about singing “Imagine” that evening.”

Jewell: He is such a cool guy. I’m wearing one of his shirts—“Define Normal.” I wore it because I saw it in my closet and thought, “Define Norman.” (laughter)

Jewell: I put in a new hearing aid battery for you. (laughter)

Zimmerman: Do you hear yourself sometimes? 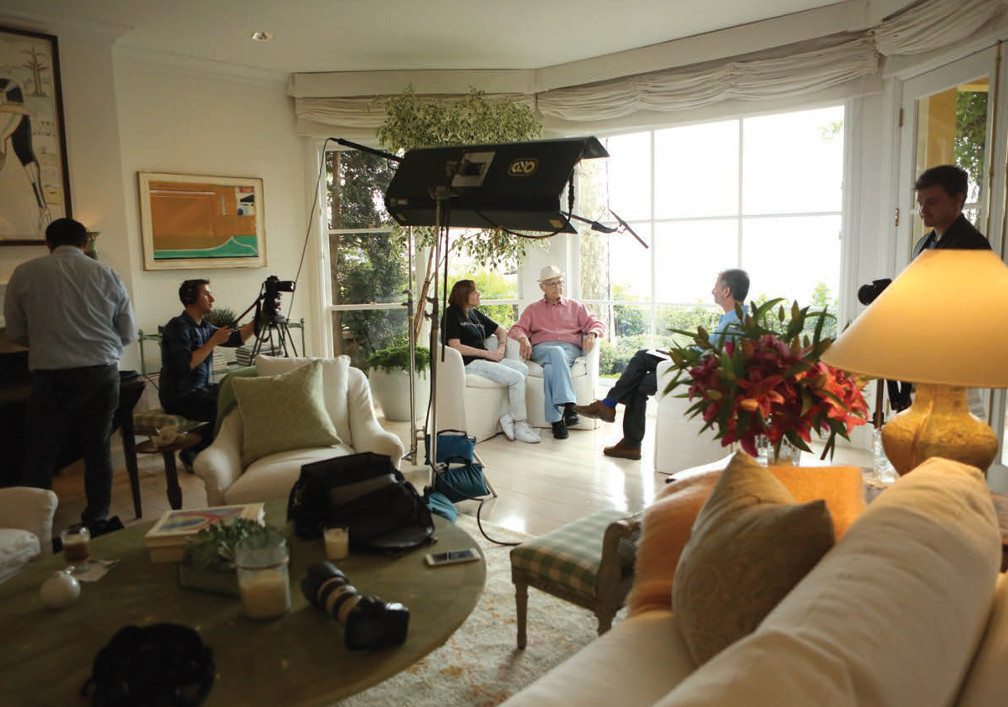 Lear: No, it tells me when it’s working.

Zimmerman: Does it speak to you? “Dear Geri, you have 10 minutes to replace me?”

Jewell: Oh, you’re lucky. You have a talking hearing aids.

Zimmerman: Can you change the voice? It could say, “Battery low.” (Speaking in a lower register)

Lear: I don’t know. It does change the input, three ways.

Jewell: They’re working on hearing devices that will translate languages. When somebody is speaking Spanish and you know English, you put your hearing device in and it will—

Lear: Oh my God. Next thing you’re going to tell me is that people will get… heavier than aircrafts and fly.

Jewell: Very interesting if it happens!

Zimmerman: So this is family here—the two of you.

Zimmerman: I read your book. Actually, I heard your book on CD. 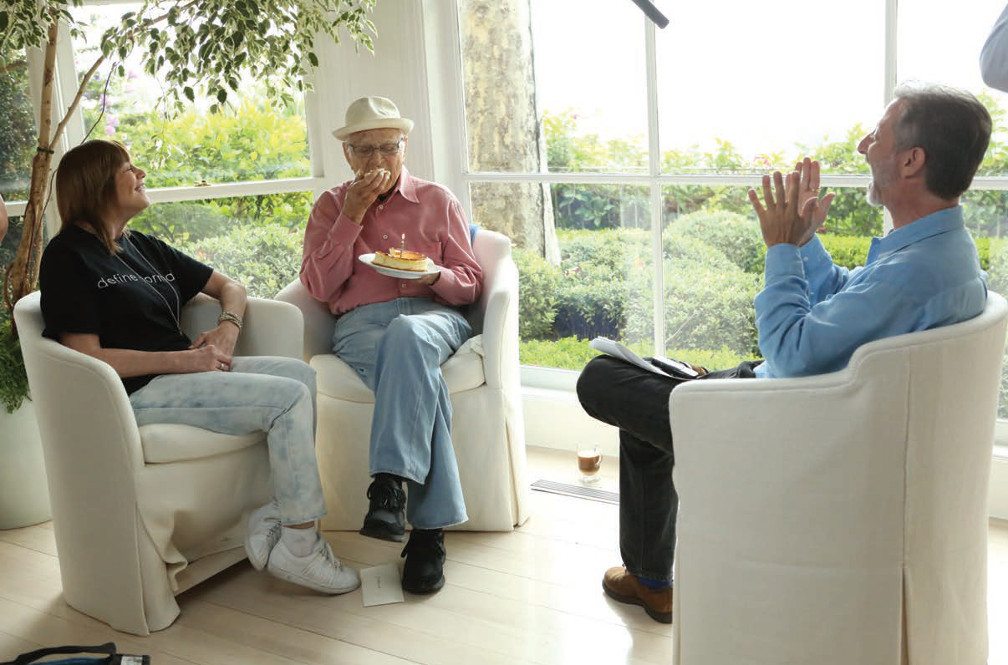 Zimmerman: I loved it, because my father passed away about 13 years ago, so to hear your voice and to see your face brought him back to me. Thank you for that.

Lear: Well, all of our lives connect. I have a bumper sticker that reads, “Just another version of you.” We’re versions of one another.

Zimmerman: Right. One of the things about your book was that you have lived your life fully.

Lear: Not yet. (laughter)

Zimmerman: There was something about how you lived it. You didn’t seem to have fear. You went through the fear. Some people just sit there and go, “Aaah, I don’t know, can I move my foot?”

Lear: Well, I dealt with the fear. It wasn’t that I didn’t fear. It was that I chose to move ahead, I guess. I don’t know how to… I didn’t let the fear overcome me. I didn’t necessarily overcome the fear, because it was there. But I moved on anyway.

Zimmerman: And I remember you said you had joyful stress.

Lear: Oh, yeah, when we had a number of going, people used to say, “God, it must be very stressful.” And having thought about it, I’d say, “Well, more like joyful stress.” Of course we were, but we were all working hard. We had the joy of doing something we cared about; the joy of seeing it score and hearing people laugh. Oh God, the joy of hearing people laugh!

Lear: Now you do standup.

Lear: So who knows better than a standup what that joy is all about? 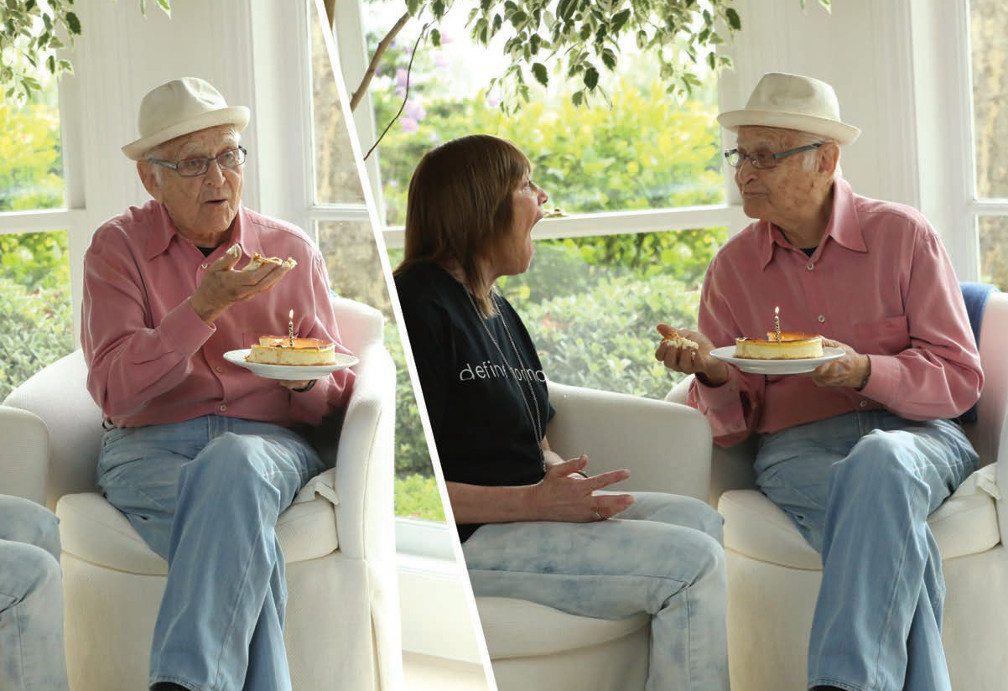 Jewell: Yeah, it’s a high, and there’s no comparison. I mean you cannot get that comedy high when you walk off stage. There’s nothing else like it.

Lear: There’s nothing like it. And all the stress it took you to get there is gone, and you leave on a high.

Jewell: I read your book, too. I haven’t listened to it yet, but I intend to. But your book inspired me all over again. I mean, I thought I knew you pretty well, going way back to 1980. And I learned a lot of things about you that I didn’t know before.

Jewell: You know what got my attention? Your vulnerability. When you think about successful people, you think they’re not vulnerable anymore. And you’re so real. You have maintained that throughout your life.

Lear: I think I learned early that it’s hard to be a human being. I don’t care what the circumstances of one’s birth, it’s hard. If life hasn’t made mischief for us, we’ll make it for ourselves. But that’s the game of life. We pay a lot of money for these fancy games of all kinds. It requires us to compete and engage and beat that game or this game. And the game of life we don’t think of that way, and perhaps we should. It’s tough. Telephones ring when you don’t want them to— (Phone ringing in the background)

Jewell: Part of the human experience. And the title of your book—Even This I Get to Experience. I have to say, one thing that stood out immediately—and you wrote about it very early on—was that you met Charlie Chaplin.

Lear: My first night in California.

Lear: Yes. We drove across the country—my wife and my not-quite-two-year-old daughter Ellen. I had $30 in hand and came out in an old beat-up convertible. We were eight or nine or ten days on the road. We were staying in a motel on lower Sunset Boulevard. It was a Saturday night, and I went out to get a Sunday paper that was printed on Saturday night, to look through the ads for a place to live. I’m driving off of Sunset Boulevard, and I come across a little theater that had been a home. It’s on El Centro, a stage theatre. “Opening tonight—Bernard Shaw’s Major Barbara,” maybe my favorite piece of literature. And a guy is sweeping up in front of the theater. He turns out to be the fellow running the place. I get out of the car. When he hears that I have a wife and daughter in a motel and that I want to be a press agent—which was what I told him I had come to California for—he said, “You know, we have someone working for us, and we don’t pay him. But I’d love to introduce you. Maybe you can help us. We can’t pay you, but you’ll meet people.” And I was fascinated by that. My first minutes in California. He said, “By the way, if you want to see the show tonight, opening night, I have a ticket for you.”

Lear: Imagine having to call my wife in a motel, after 11 days or whatever the hell it had been, driving here, alone in this cheesy motel. “What are you doing?” “I’m going to the theater.”

Lear: I had to. There were three seats in front of me, taped off. And as the lights were going down—it was only 90 seats or maybe a few less—in walks Dame somebody, a great British character actor, and Charles Chaplin. He sits immediately in front of me. I’d been in California an hour and 20 minutes. How’s that for an omen?

Zimmerman: If that’s not a sign. When I was listening to your book, I felt so close, like family. Like the time you got the dog.

Zimmerman: Yes, Minsky. And how it related to your film.

Lear: The Night They Raided Minsky’s… 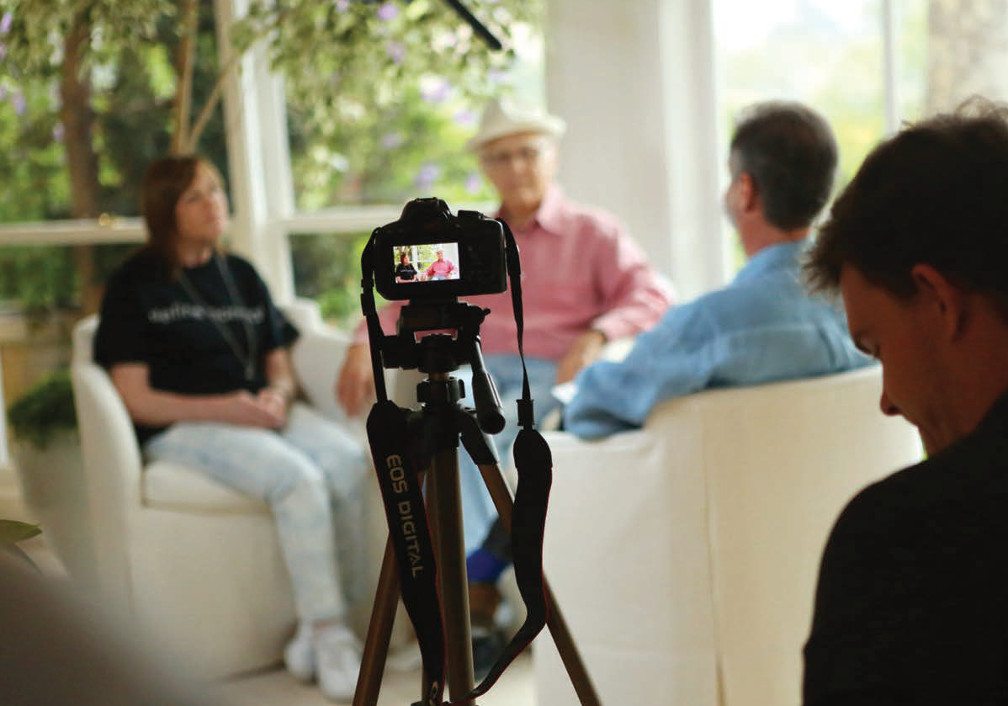 Zimmerman: Yeah, I loved that story. How you were happy your daughter got the dog, but you also felt sad about the other children who wanted the dog as well.

Zimmerman: What do you want the most at this moment in your life?

Jewell and Zimmerman: (looking at one another) We don’t either.

Zimmerman: And then “That’s Cousin Geri!” (looking over at Geri) That’s what you said at the Media Access Awards. It was so groundbreaking that she was the first performer with a disability on TV.

Lear: Amazing how long it took me.

Zimmerman: And listening to your book, going through it, you did that with everything. You did it with gay, with transgendered—

Jewell: On All In The Family. ...
Login to read the full article. SIGN UP HERE FOR YOUR FREE MEMBERSHIP
If you are already a member, welcome back! LOGIN HERE