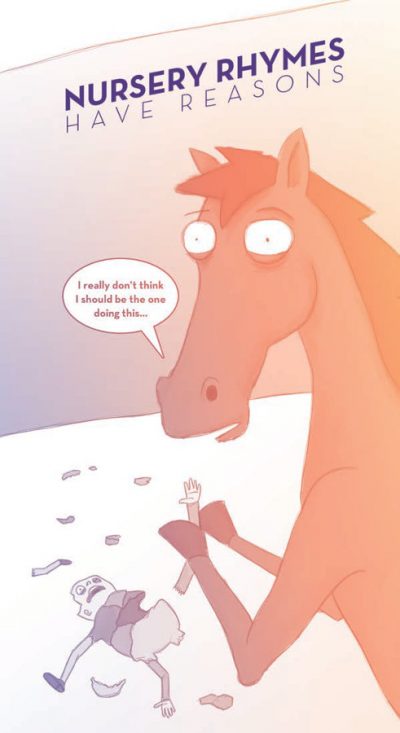 I’ve always enjoyed those cute little nursery rhymes that I heard as a small child. I never put much thought into those stories, but now that I’m older, I have started to rethink some of them. Call me a maverick, but as I examined the verses, things just didn’t add up. Who were these characters; and, what was their motive for what they were doing? It seemed crazy to me. As a once-long-ago psychology major, I decided to delve into the psyche of these poetic stories to provide an in-depth analysis that could very well explain some of these baffling questions that I had.

Little Jack Horner Sat in the corner,
Eating a Christmas pie;
He put in his thumb,
And pulled out a plum,
And said ‘What a good boy am I!

Is it me or is something not right with this boy? Hey Jack, can’t you do something normal like… go outside and play with the other kids? There’s an eerie oddness about him just sitting in a corner and playing with a pie. Did he not get any toys for Christmas? Something tells me he often talks to himself and to fruits. I’m going to guess that he lives in reality most of the time. I have feeling there’s a wonderful land of make-believe in his head.

Is he really a good boy? No mother would give her child a whole pie… even at Christmas time, so one has to assume that this Horner kid took that pie without parental permission (I’m going to guess it was on the window sill cooling with the plum aroma floating throughout the place and Jack was drawn to it. Maybe there were several pies and Jack figured no one would miss just one. But, that’s a conjecture and not really important). The pie stealing theory seems very plausible, because this boy just comes across as the type that gets extremely hopped up on sugar and bounces off the ceiling driving his mom crazy. So, at best, the mother would most likely only give him a sliver of the tart.

What is important here is that Jack has the audacity to label himself “a good boy.” Really? A good boy? You just stole an entire pie, punk. Does he also twirl cats around by their tails and claim to be a “kind boy” to animals? Also, let’s not forget that “good boys” don’t sit in the corner. They’re there for a reason. I can hear the mother now, “Jack, have you seen the Christmas pie that was on the window sill?” And ol’ Jack is sitting in the corner with his face covered in plum sauce, smiling in his sugar excitement, chiming, “I’m a good boy!”

My only hope is that Miss Horner was able to get Jack into therapy before he became an adult. He has the makings of a liar, thief, and wife beater.

Little Miss Muffet
Sat on a tuffet,
Eating her curds and whey;
Along came a spider
Who sat down beside her
And frightened Miss Muffet away.

Well, I think it’s safe to assume that nothing good ever comes from sitting on a tuffet. You never want to sit on anything that rhymes with your name (Ask Fred, who sat on a bed, only to wake up dead). A tuffet is more or less a footstool that usually goes in the living room. Miss Muffet should certainly know that the kitchen is the place for one to be dining in. And why the curds and whey? These are lumps of liquid found in cottage cheese. They taste disgusting! Prison guards won’t even serve curds and whey to starving people in a Beijing prison. I’m always leery of people who like weird foods. At least Jack Horner went for the plum pie. That I can understand.

Maybe Muffet had never tried curds and whey? Perhaps some mean school kids told her, “You’ve never had curds and whey? They’re the best! You have to try ‘em!” As luck would have it, the spider helped her out. Muffet ought to thank the creepy crawler for chasing her away from that dreadful lunch.

There is something very cute and endearing about Miss Muffet. She seems ...
Login to read the full article. SIGN UP HERE FOR YOUR FREE MEMBERSHIP
If you are already a member, welcome back! LOGIN HERE
by Little Jeff Charlebois