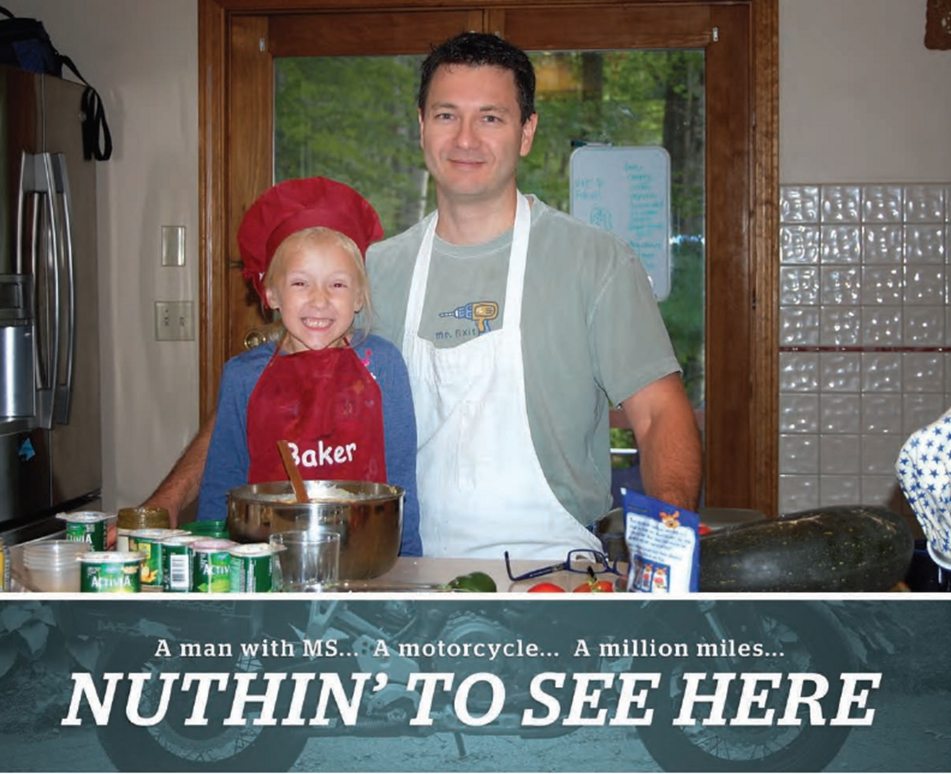 In the time it took to suck in half a breath, dozens of anti-lock braking systems-including the one on my motorcycle-activated, chirped and squealed. It was music to my ears, spoiled only by the smell of burning rubber and overheated brake pads. You might call this instrumental piece, “Brake Dancing in the New Millennium.” Only by the grace of brake systems by Bosch, Bendix and Brembo were there no fatalities, no Med-Flights, no serious injuries, no on-the-scene reporters, no crash reconstruction teams, no embarrassing eyewitness interviews, no ambulances, no tow trucks and no raised insurance premiums. Other than 30 pairs of soiled underwear, no evidence of the event would ever materialize because the horrific accident never happened.

At home, “nuthin’ to see here” is a jovial saying my 6-year-old granddaughter and I use in an attempt to hide some unintended fall-out from a crazy kitchen concoction we created for our make-believe restaurant we call Yucky’s.

On the New Jersey interstate, however, the phrase was profoundly serious, as the result of the near calamity might have been a fatal collision. I was of a mind to kiss the stranger in the brand new Mercedes SUV directly behind me, and I was pretty sure he must have felt the same way; but after every driver within eyeshot unilaterally exhaled in a moment of silence, the traffic started to roll forward, and I settled for a big thumbs-up instead. I never got a clear look at the driver behind me, who let me live another day, but I believe that it was either Jesus Christ, Mario Andretti, a person with a collision-avoidance system, or possibly all of the above.

I was returning from speaking at a multiple sclerosis (MS) patient luncheon in Brooklyn, NY, and the road was still wet from the morning rain. I was alone, but joined by five million other motorists in the daily migration, fighting our way through Friday afternoon traffic. At one point the congestion let up, and we began to move at a more liberated speed. We came upon a steep hill and as we crested to the top, traffic came to a dead stop on the other side of it. The place was a parking lot. I probably had about 10 car lengths to stop before potentially catapulting myself over the roof of the BMW 7 Series car ahead of me. It and the other cars in the lanes to my right skidded and slid, but were able to avoid catastrophic contact. My motorcycle’s anti-lock braking system activated, and eventually I stopped a few feet from the BMW’s bumper.

As soon as I felt confident I could stop in time, I shot the dreaded glance into my mirror just in time to see the Mercedes that had been behind me leap over the summit. Clearly it was impossible that such a large vehicle would be able to stop before melding my motorcycle and me into everything in front of me. To my left was a Jersey barrier; to my right cars zigged and zagged, screeching towards zero. There weren’t a lot of choices left for me as Mr. Andretti and I chirped to our final resting positions. Ferociously, if not miraculously, the SUV stuttered to a halt, just inches from my bike’s rear trunk. I knew it was a brand new Mercedes because when the smoke cleared, I’m pretty sure I remember seeing the date code etched on a headlight!

It took some miles to process just how close a call it had been, and how much a role these new brake systems played in the non-pileup. It didn’t take me long to start wondering what would have happened if I’d been riding a different bike, or if the vehicle behind me had been older with outdated drum brakes. It also made me realize that sometimes events that never happen are the greatest news stories of all.

Making it through all of 2013 without a new MS attack was also great news. Medications that slow the progression of the disease do work. Sure, I had some residual issues with old symptoms that came and went, along with the usual fatigue and memory challenges, but I wish I could grab headlines above the fold on every newspaper in the world and declare:

EXTRA! EXTRA! READ ALL ABOUT IT. NOTHING TO REPORT ABOUT PAUL’S MS THIS YEAR.

There may be nuthin’ to see here, but there is plenty for me to be thankful for. In addition to a year without disease progression, I’m thankful to be given the opportunity to ride my motorcycle across the country, helping others with MS find their path to healing as well.

Oh, and I’m thankful for my wife.

Oh yeah, and my family, my friends, my supporters, and pizza.

Yes, definitely pizza, any kind of pizza, as long as it wasn’t made at Yucky’s.