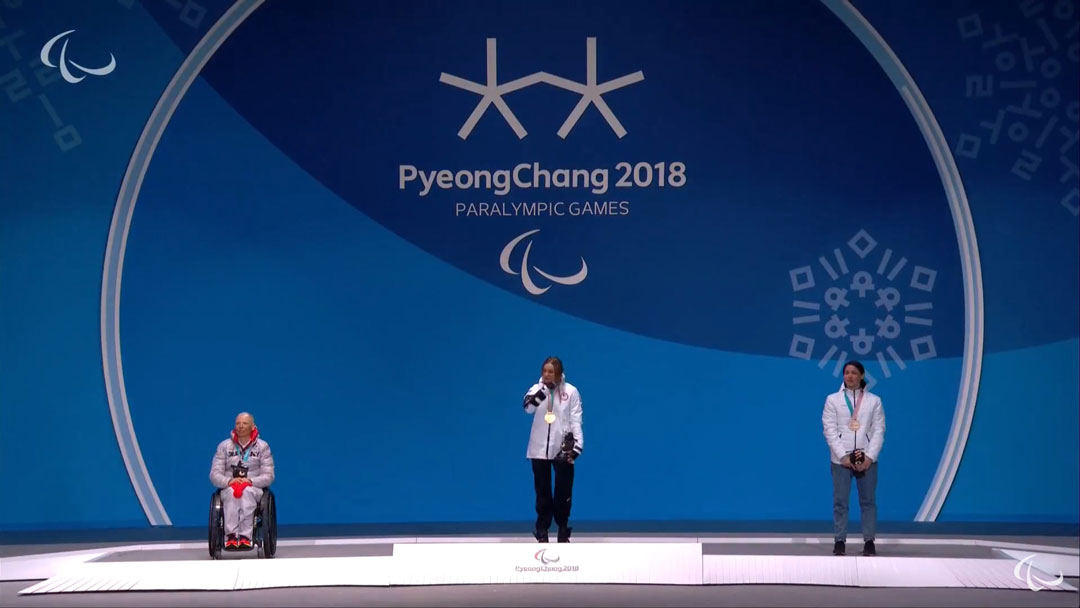 Masters injured her arm two weeks prior to 2018 Paralympic Winter Games and was told she would not be able to compete in Pyeongchang. Amazingly, she recovered well enough to not only compete, but to win a silver medal on the first day of the games in the 6km sitting event. (pyeongchang2018.com, 10 Mar 2018)

Masters is no new-comer to the Paralympic games, having two silver and three bronze medals from past competitions before winning the gold.  She competed in road cycling at the 2016 Games in Rio de Janeiro, biathlon and cross-country skiing at the 2014 Games in Sochi, and rowing at the 2012 Games in London where she won the bronze. (paralympic.org, 2017; Facebook page, 07 Sep 2017)

Cross-country skiing was an accident. I love winter, I love snow, I lived in Buffalo, I am from Ukraine where it gets cold in winter, so it is in my blood. A cross-country skiing coach heard that I wanted to try it and gave me that opportunity. A few weeks later I got to go out on the snow and try it, and I fell in love with it. (uatoday.tv, 30 Oct 2015)

UKRAINE TO UNITED STATES OF AMERICA

Masters was born in Khmelnytskyi, Ukraine, located just a few hours from Chernobyl, Ukraine, the scene of a nuclear accident in 1986. Her birth mother’s exposure to radiation from living nearby is believed to be a major factor in Masters’ impairments. She was abandoned at an orphanage after she was born. She was adopted by Gay Masters at age seven and taken to the United States of America.

Where I was from, they had radiation leaks. A cop [policeman] in my village would go around and say, ‘lock up,’ and you boarded your windows and doors and didn’t come out for a day or two to let the radiation die down. I was in a very poor orphanage so there wasn’t much food. There was never enough to satisfy the hunger. There was also abuse, physically and sexually. I don’t remember much because many memories are blocked out. I always knew that I would have a mother, I just had to wait.

Masters was born with tibial hemimelia, resulting in her legs being different lengths without shinbones. She also had five webbed fingers without a thumb, six toes on each foot and only one kidney. She had both legs amputated above the knee, one at age nine and the other at age 14. (uoflphysicians.com, 06 Mar 2014; espn.go.com, 11 Jul 2012)

I think I’m on my 750,000th time now. I re-watch it every single night and it gives me the same kind of goosebumps and chills because it’s such a historical moment and it definitely inspires me to try to get the same historic achievement for the US Paralympics team. In Para Nordic skiing we have silver and bronze but we don’t have a gold medal yet and watching that race has definitely helped me believe that, ‘Oh my gosh, we can do it’. (pyeongchang2018.com, 05 Mar 2018)

“To be irreplaceable one must always be different.” (Twitter profile, 04 Sep 2017) @OksanaMasters