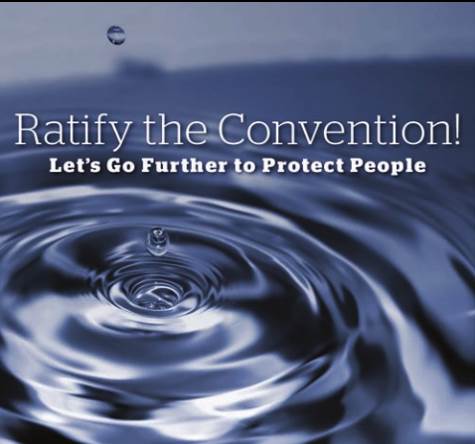 There is a powerful movement in the United States to ratify the United Nations Convention on the Rights of Persons with Disabilities (CRPD). During a recent Senate Foreign Relations Committee hearing, civil rights, veterans and disability groups, along with business organizations, passionately urged the Senate to ratify the treaty and prevent another defeat.

This was on the heals of last year’s narrow loss in Congress with five votes short of the needed two thirds majority—despite strong bi-partisan backing, and the support of former Senator Bob Dole, who himself sustained a disability while serving in World War II. His impassioned plea to ratify the treaty on the Senate floor was drowned out by a misinformation campaign that generated enough resistance to prevent the Convention’s passage.

This misinformation centered around parental rights of children with disabilities, home schooling and abortion rights, and was followed by a massive letter-writing and telephone campaign that tanked the treaty. This was despite the fact that the CRPD would not have diminished any parent’s rights regarding how their child is educated, nor does it support abortion rights.

The campaign also suggested that the CRPD would impinge on US sovereignty, create new opportunities for lawsuits, or put a UN Committee in charge of US law, which is not true. The US International Council on Disabilities (USICD) published a fact sheet in an effort to dispel these and other myths.

In the US, we have a plethora of civil rights laws designed to prevent or redress discrimination against people with all types of disabilities. These laws include the Americans with Disabilities Act (ADA), the Rehabilitation Act of 1973, the Individuals with Disabilities Education Act (IDEA), the Genetic Information Nondiscrimination Act (GINA) and myriad state law variations. Opponents of the treaty argue that because we have these laws, there’s no reason for the US to ratify the Convention.

Despite these anti-discrimination laws, the US should step up and ratify the treaty because we are a world leader in this area. In fact, the Convention was inspired by our range of disability rights laws and, according to a pre-vote editorial in the Huffington Post, a vote for CRPD means a stand for “enlightened global engagement and a compassionate commitment to civil rights for all—including citizens with disabilities.”

We should ratify this international treaty that would help ensure millions of people with disabilities around the world have basic rights, open markets to American business abroad, and reassert the United States as a global leader on disability rights, the article’s author, William Daroff, went on to say.

Approximately 10 percent of the world’s population, or 650 million people, live with a disability. This is the world’s largest minority, and because of population growth, medical advances, and the aging process, the number is growing says the World Health Organization. Upwards of 80 percent of persons with disabilities live in developing countries.

In most Organisation for Economic Co-operation and Development (OECD) countries, women report higher incidents of disability than men and are viewed as multiply disadvantaged, experiencing exclusion because of their gender and disability. In addition, women and girls with disabilities are particularly vulnerable to abuse and less likely to obtain police intervention, legal protection and/or preventive care.

For every child killed in warfare, three are permanently disabled and, according to the United Nations Educational, Scientific and Cultural Organization (UNESCO), 90 percent of children in developing countries do not attend school. Violence against children with disabilities occurs at annual rates that are at least 1.7 times greater than for their non-disabled peers. In the US, children with disabilities were excluded from school and institutionalized prior to legislation that was the precursor to the IDEA.

Public entities excluded people with disabilities from their programs and services prior to the enactment of the Rehabilitation Act of 1973 and the ADA. Our collective experience