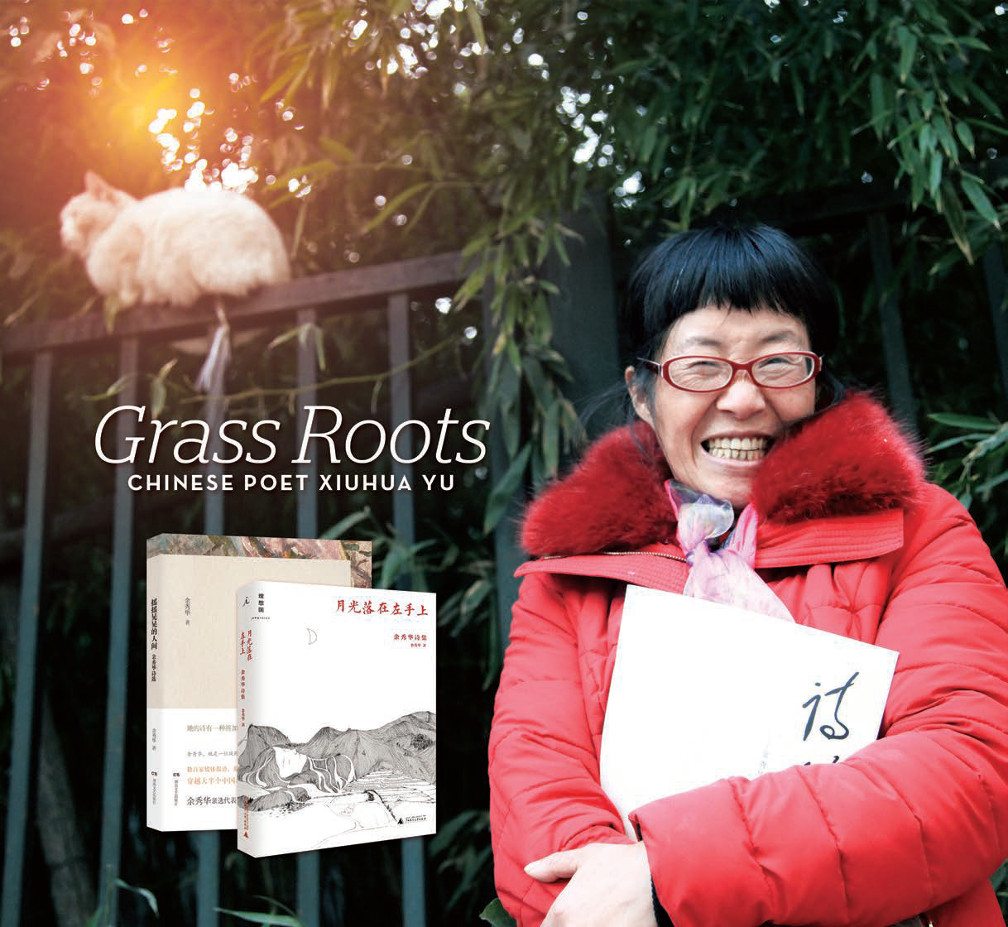 Some critics believe that in the past there were few grassroots poets, or poets without a formal education. But recently a group of them has emerged, representing farmers and coal miners. Their poems are candid and powerful. People love their poetry because it reflects their own reality. Poet Xiuhua Yu is not an isolated case. As poets, they really should be recognized as a new genre and as a phenomenon.

Xiuhua Yu has caught people’s attention since last September when her poetry was published in the prestigious national magazine Poetry. When her poetry was introduced through her blog, the number of “likes” came like ocean waves. Her most recent popular poem is “Over Half of China Sleeps with You.” People are increasingly curious about this female peasant who feeds rabbits. Some reporters even traveled over half of China to see her. She walked wobbly and had a hard time speaking to the reporters.

Xiuhua Yu was born in 1976 at Hengshang village in China’s Hubei Province. Born feet first, she suffered from cerebral hypoxia. Later on she developed cerebral palsy. Since her parents had to work in the field all day long, her grandmother raised her and her younger brother.

Due to her cerebral palsy, Xiuhua wasn’t able to walk until age four. Then her father made a special walking tool for her. It was made with a wooden stick and wheels. When she needed to walk, she always had the walking tool with her. During her early elementary years, her father would carry her to and from school. Later on, her school teacher would hold her hand and walk her home.

She was a good student who studied very hard. Due to her physical condition, her right hand was not able to hold a pencil. Although her left hand could hold one, she wrote slowly. This affected her tests and grades since she didn’t have enough time to finish the exams. Her hands and feet were too weak to play with classmates. All she could do was watch them play games.

In July 1995 she dropped out of the high school before taking her college entrance exams. Even though she was good at language arts, she lagged behind in math. After she realized that her physical condition prevented her from taking her college exams, she burned all her text books in front of the school.

The best memory of her school years made her happy for a long time. “What a sweet little girl!” she remembered a teacher saying who praised her poetry after she read aloud a poem from her diary.

She was all by herself for a while. Many classmates went off to college while others went to work in the cities. When she was19 years old, she was introduced to a man by her father whom she later married. “Marriage was fresh at the beginning,” she said, “but later on I was bored.”

Playing mahjong with villagers was the main entertainment, but she just really loved reading. She has read Jorge Luis Borges works, Alai’s The Dust Settles, and Haruki Murakami’s Norwegian Wood.

Her first published piece of poetry was in the magazine September. Then her poetry was read on the Jingmen local news. The editor of a newspaper recognized her poems and considered them remarkable.

After her poems were published last year in Poetry, which is considered China’s top magazine, she was invited to recite her poetry at the People’s University of China last December. The event was held exclusively for the grassroots poets, and she shared the stage with three other poets. When she began to recite her poetry, her mother began to cry. Although she couldn’t understand her daughter’s poetry, she was nonetheless proud of her. On December 22, 2014, the People’s Daily Newspaper published a story about Xiuhua Yu in the cultural section. Then, in the local government office, she became a celebrity. In Hengshang Village, people didn’t know what she wrote about, but her poems were published. She is now a big celebrity.

Legend in the village says, if she were not disabled, she would have her good fortune somewhere else. The villagers believe that her intelligence is genetic because her brother is a high school teacher and her son is a university student.

Xiuhua Yu admires people who leave their villages to find work. In 2012, for the first time in her life, she left her own village to work. She found a job through the Internet working for a disabilities employment services company in Wenzhou. The company would cover for room and board, and she would get paid for doing manual work with leather.

So she bought a bus ticket and went to Wenzhou. But her father called her back home before she had a chance to get paid. She said she didn’t like the people there, but her father said she was sick and had a quarrel with her boss. The outside world is harsher than she thought. She was easily irritated by her short temper. It was known in the village, but everyone did not care due to her disabled condition. She admitted that she had a short temper. Her parents tried to help her by opening a grocery store, but she would not talk to customers. Then the store closed.

Once there was a friend, whom she met online, and who came to the village. The friend turned around after seeing her from a distance. Xiuhua Yu often uses rude language to protect herself.

In January, her phone was ringing constantly, so she wrote on Weixing, a cell phone application similar to Facebook, “I wish people read my poems instead of calling me. I just want to try my best to write my poems peacefully. It will not last too long as the wind will blow away soon.”

Some scholars consider her China’s Emily Dickinson or the French countryside poet Yamu, but Xiuhua Yu told reporters she had never read their poems. “Poetry is the natural expression of the soul.” This is Xiuhua Yu’s understanding of poetry.

Her poems express a profound life experience of living with pain. People find her poetry candid, passionate, fresh and pure; there is no sense of artificiality. Her unfulfilled feeling in disability, marriage, and her deep love for her family has been transformed into her poems.

“I don’t want to be treated like this,” Xiuhua Yu told reporters. In January, she wrote a poem in front of reporters called “If You are Silent, the Sea will Stop the Noise.” Xiuhua Yu said, “I’m just a peasant woman and really grateful to poetry. This is my bonus that my poetry has led people to open their arms and hug me.” She hopes people will treat her as Xiuhua Yu, rather than someone with cerebral palsy or a farmer.

“Poetry is what really makes us live in peace,” said the German philosopher Martin Heidegger. One fan wrote on her blog, “I just want you to always be yourself.” People ask her what her dream is. “All the praise becomes like spring; I just want to live well and to write good poetry,” says Xiuhua Yu. 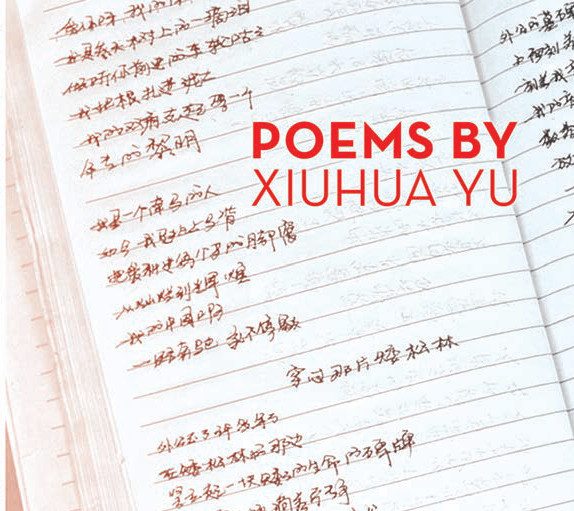 I cannot confess in court
Snow in my left pocket and fire in my right
Fire would burn the prairie, the city, and the fish
Snow would cover the road and the crime
I have the moonlight, but I am in the dark
I have a peach tree, but I don’t see it bloom
I have the endless spring, but I feel winter
I have stolen the chemical plant, the office building, and the
museum
But, I have nothing and I am penniless
I am a sinner
Let me run away
I am my own judge
Ban my spirit
I’ll run away in the dark night from this town
Without a trace

A Bag of Wheat

The second time, he can’t carry the bag of wheat by himself
It slipped down
He cursed and said
He could do it last year
The third time, I help him put the bag on his shoulder
I said to him: you have no white hair
You can do it
But I know he will never have white hair
He has a disabled daughter and a teenager grandson
He is too busy to even grow his hair white

You Don’t See What I cover

In spring, I hold up flowers, fire, the tree crowns on the cliff
Yet the lonely voice of the rain
Pound the sunset sky
So hurried and no time for love
I bite your name until I bleed
Still I can’t break the dark seal
These small things make me pause: cannas, black butterfly, and
water reflections
I speak to them and bow my head
Hello! How are you? Please accept my affection!
Still, I have never been confused
Just like a river, days and nights constantly running
But in the end I can’t forgive myself
I keep you in my heart, complete
You are better not knowing
All my imagination
How much the dust can conceal the pure love
From a lady like me

Such a pity to live daily
Fetching water, cooking, and taking medicine
Place me into a sunny day
Just like dried orange peel
All kinds of tea to drink
Chrysanthemum, jasmine, rose and lemon
These wonderful things take me to the road of spring
So I want to cease the snowing in my heart
It is too white to relate to spring
Reading your poems in the clean yard
Such a lovely moment
Dreaming like those sparrows passing by suddenly
Time is so bright and wonderful
I should not be so sad
My liver and intestines are becoming pieces, inch by inch
If I send you a book
It is not about poems
It is about plants and crops
Telling you the difference between rice and tares
Telling you about a frighten spring from one tare

I limp out of the yard and he follows
We walk by the vegetable patch,
Over the ridge to the north
To grandmother’s home
I fall into a ditch and he wags his tail
I reach out to my dog and he licks the blood from my fingers
The man is drunk and he says that he has a lover in Beijing
She is better looking than me
They go out to dancing if he has no work
He loves dancing women
Loves to watch the women sway their hips
The man says, those women moaning in bed, sound nice
Not like me, no sound, and always coving my face
I am silent when I have my meal and call out
“Xiaowu, xiaowu,” I toss him some meat
My dog happily barks and wags his tail
The man pulls my hair and pushes me against the wall
Xiaowu wags his tail constantly
I am not afraid of the pain, so he is powerless
We walk to grandmother’s home
Then I remember, she has been dead for many years