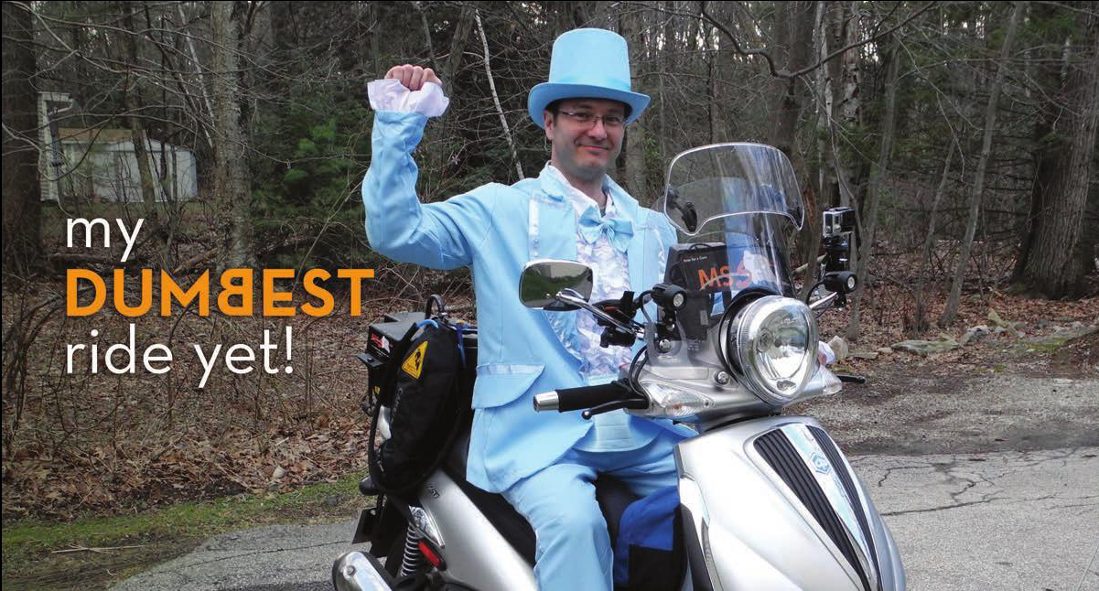 I first received an invite to a gathering of motorcycle long distance riders, called a RTE, or ride to eat. Riders are invited to a restaurant most likely very far from wherever they call home to kick tires and break bread with other long distance riders. Boasting rights went to rider who rode the longest distance to get there of course!

Sponsored by the Iron Butt Association, they named this one the MEAT LOVERS RTE. The email boasted a famous Chicago entrée of “an obscene five pounds of ground sausage, pork and beef mixed with spices and wrapped in a weave of brown sugar bacon, slow cooked on a pig roaster.” The rest of the menu was carnivorous. as well.

My keyboard shortcircuited from the au jus drool, and I was using my iPad. Never ever, read emails when you are hungry.

The event also had a special Iron Butt certification for anyone who documented riding 1,000 miles or more in under 24 hours to the event… Hmm, a quick check on my mapping program found Chicago was precisely 1,040 miles from my house.

I checked my schedule. I could ride through Friday night and arrive in plenty of time for the 6:oo pm dinner in Chicago on Saturday. Another 1,000 mile push on Sunday and make it home in time for work Monday morning. It would be tough, but I figured I could make it. If it had been in the middle of the summer when my multiple sclerosis symptoms are affected by heat, I may not have registered. But,it was in May, so I sent my registration in and looked forward to diner in Chicago.

Unfortunately, the first invite was just a hook, a cruel bait and switch tactic used only by rogue CIA operatives, used car salesman and Rally wizards like Evil Lord Kneebone, the grandmaster of all that is motorcycle endurance riding. Mike is a great guy, a friend, and the President of the Iron Butt Association; the worldwide organization dedicated to safe, long distance motorcycle riding.

A day after registering for the Meat Lovers 1000, I saw Mike’s real challenge.

Coincidentally, by no rhyme or reason, a second slightly frightful challenge just happened to take place over the same weekend; called the International Scooter 1000 Insanity. The rules were quite loudly simple.

Called Scooter Insanity, because most normal riders wouldn’t attempt a 1,000 mile day on a motorcycle, never mind doing it on a scooter. Well, the title of the challenge is justified. And may I remind you, I know a guy who rode a Russian Ural in the 11 day 11,000 mile Iron Butt Rally. Scooters are fun to zip up and down the beach roads and on sidewalks and across college campuses, but they are not suited for long highway jaunts for 18 hours at a stretch. They don’t even have a clutch for God’s sakes!

If I rode a scooter in the woods and nobody saw me, would I still be a man?

Ok, I have some friends that ride scooters. I admit it. I had ridden a scooter once, and it was, well, it was FUN! But riding a scooter for 1,000 miles in less than 24 hours was just plain DUMB.

I then saw the second part of the scooter challenge and soon realized it was just the opportunity I needed to make a complete fool of myself while raising money for the National Multiple Sclerosis Society. As I developed the plan, it may have gotten a tad out of hand, but extreme rides do call for extreme measures. Apparently not only will I ride for food; I will ride for a reason. We need to find a cure for multiple sclerosis now!

Insanity GOLD it was called. Not only ride 1,000 miles in under 24 hours on a scooter, but you had to use a scooter with a 250cc motor. A 250cc scooter by the way, is like a bicycle with a 9volt battery strapped under the seat. These things have 2 gallon gas tanks and 12 inch wheels! Attempting to ride 1,000 miles in under 24 hours on one of these toys from Power Wheels is, well, just plain DUMBER. 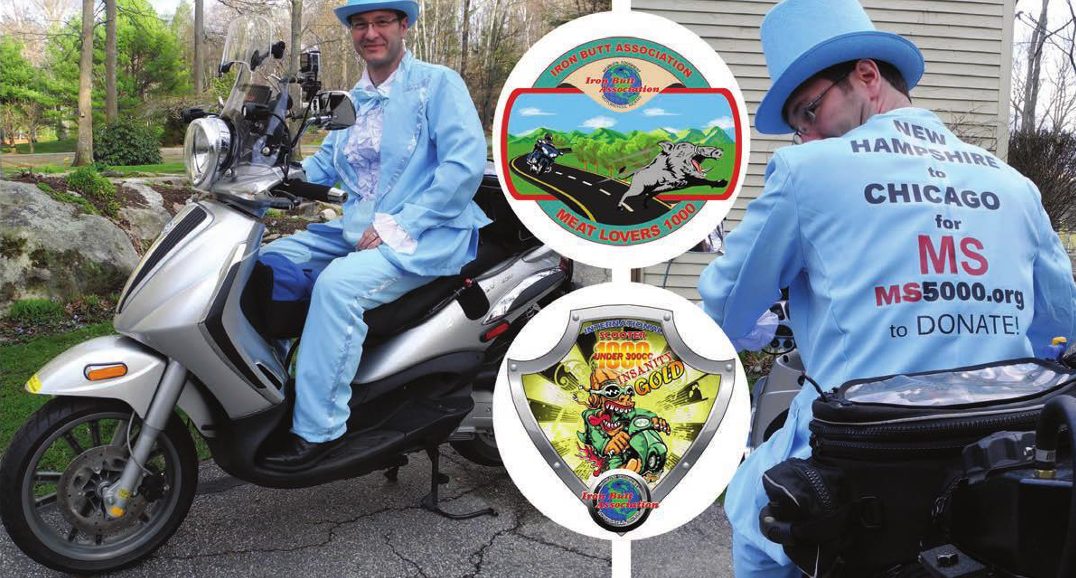 Was it worth risking life and limb, not to mention being seen on a scooter—to get a handshake and a paper certificate after eating a meal of ground up umbrella handles stuffed into goat intestines wrapped in layers of maple flavored congestive heart failure? Why YES, I think it was!

I sent out an email blast to my supporters, asking for donations to the MS Society. The more I raised, the smaller scooter I would ride, and if I raised $2,000 in a week, I would not only ride a little scooter, I would do so dressed as Lloyd from the movie DUMB and DUMBER, in a powder blue tuxedo!

Needless to say, my so called friends ponied up and I had to get fitted for a tux. I got hold of a Piaggio BV250 scooter from National Powersports Distributors and with the help from Twisted Throttle started the process called farkling (Adding all types of accessories for safety and comfort).

I had my GPS and cellphone wired into my helmet, auxiliary driving lights and a bigger windshield. My SPOT tracker and GoPro camera were mounted so my supporters could get a live feed during the ride. I figured the 2.6 gallon tank would give plenty of chances to view my powder blue butt getting kicked at inner city gas stations as I waddled across half the United States. Donations are still accepted by the way…

Food, water, tools and spare parts; an extra pair of underwear and a mix of Preparation H and Shoegoo tubes filled all the other nooks and crannies of the bike. No room for my MS symptoms, I left them at home. I got a witness from the Greater New England Chapter of the National MS Society, and then I rode to Chicago in under 24hours dressed in a powder blue tuxedo all to raise awareness for MS! Donations for my ride can be made to the National MS Society.

With my famous Clamsicles (clam chowder popsicles) coming in a close second, my wife claims this ride idea was absolutely my DUMBEST! 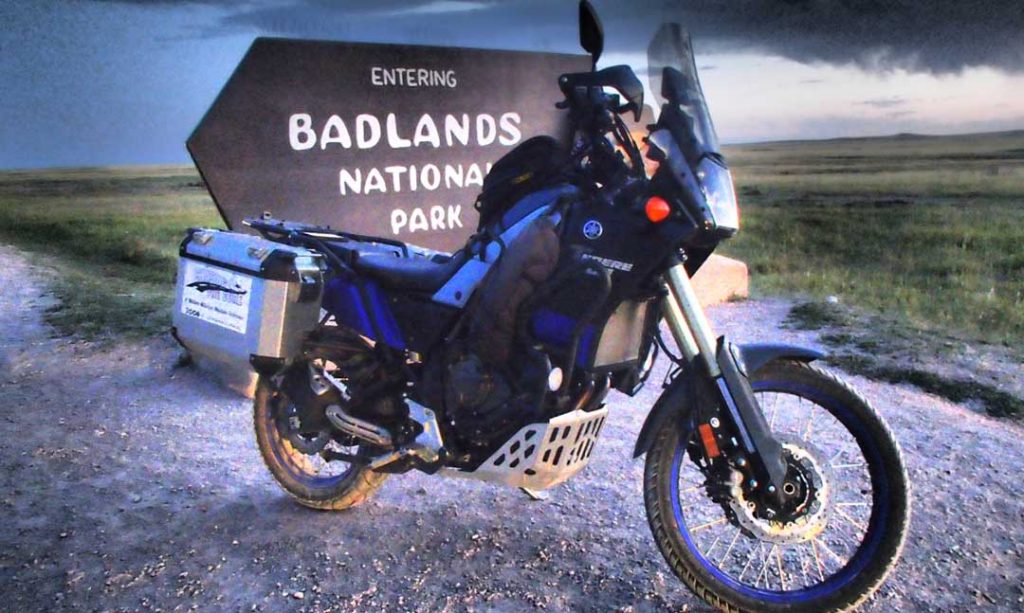 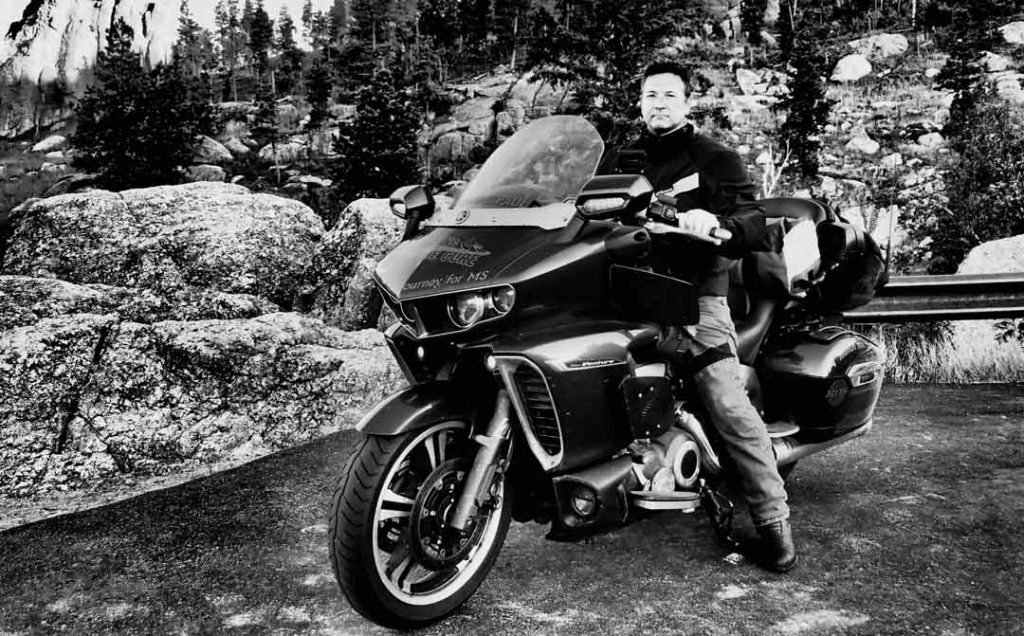 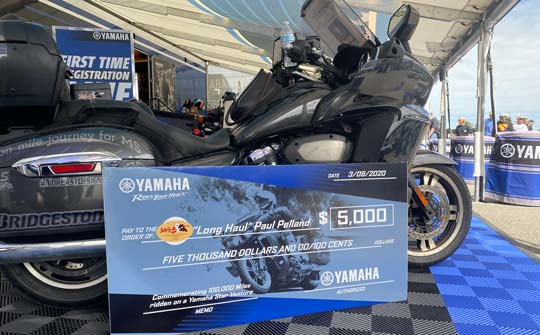 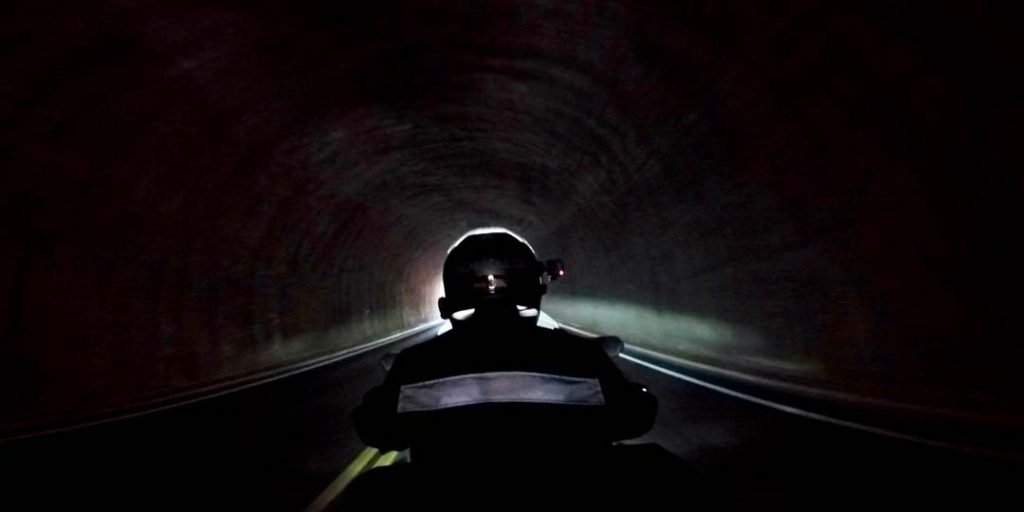