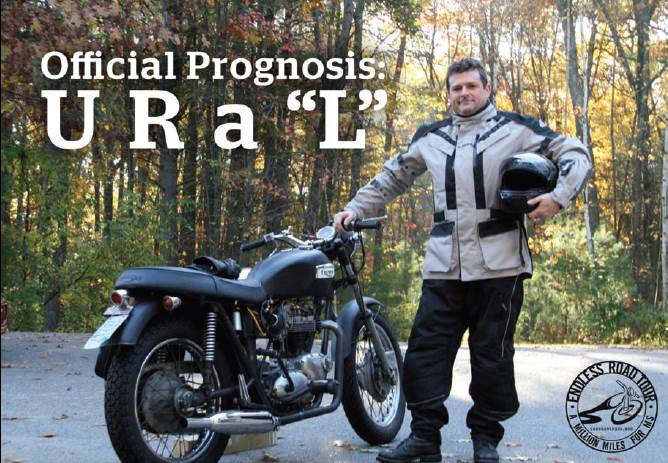 Recently and coincidentally, after a fire alarm went off in his office building, I was finally able to steal Physician’s Assistant (PA) Paul Barlow away from his busy schedule for a few moments for this candid interview. Mr. Barlow is part of the highly-skilled professional team that oversees my multiple sclerosis (MS) treatment. He also speaks at MS patient support events and clearly out of jealousy, he just bought himself a new adventure motorcycle.

Paul “Long Haul” Pelland: Thanks for finally taking the time to answer my questions.

Barlow: Sure, I love ambush journalism.

Pelland:What is a PA? Are you like a glorified Nurse Assistant?

Barlow: Glorified Nurse Assistant? I wish! They have a union and get overtime. The Physician’s Assistant profession was created to fill a void and meet a need. During Vietnam, corpsmen and combat medics performed in a capacity similar to physicians, caring for injured soldiers. Unfortunately, when the PAs returned home, there was no equivalent career in civilian life waiting for them.

They were not nurses and yet they were not doctors, either. Out of that gap, a new profession was born. The PA’s education is modeled after medical school: It requires six semesters of professional education, including 42 weeks of classroom education, followed by 42 weeks of training in a clinical setting. By comparison, doctors undergo an additional semester of each, followed by their residency.

Pelland: Wait, didn’t you used to be in construction?

Barlow: I hung drywall — but not well, did electrical work, sold securities and insurance, worked retail, and also did a stint in Bosnia for Uncle Sam, where I was a nursing assistant. At Harvard University, I worked in cancer and genetic research, which, much like sleeping in a muddy foxhole, is cooler to say than it is to do. I sold lithographic prints business-to-business until it landed me in jail for a few hours in a small town in Alabama. I had way too many teeth and my eyelashes were too long for me to survive in prison. Over the years, I’ve done whatever it takes to feed my wife and four daughters.

Pelland: Why did you decide to pursue a career in neurology?

Barlow: Three reasons: (1) I was a little paranoid that if I went into psychiatry, the guard at the inpatient ward might never let me out; (2) I was offered a job when I graduated; And (3), which is probably the answer you were digging for: my youngest daughter was diagnosed with a neurodegenerative disease when she was about one-and-a-half years old. Since then I have had a hard time considering any other clinical focus.

Pelland: But unlike the proverbial shoemaker’s kid who has no shoes, you’re making sure your daughter gets the absolute best care available and that makes you a pretty amazing dad. How long have you been in neurology?

Pelland: Are you allowed to openly discuss your alien research?

Barlow: No, but I can discuss the fish-brain research I did. Don’t look so disappointed; those experiences prepared me to take care of patients like you.

Pelland: Could you give 10 examples of why I’m your favorite patient?

Pelland: Well, could you explain MS in medical terms?

Barlow: ‘It’s an immune-mediated inflammatory disease that attacks myelinated axons in the central nervous system (CNS), destroying the myelin and the axon in variable degrees…’

(Barlow looks up from his grandpa reading glasses and sees me yawn.)

Barlow: I see that was very helpful. My eyes glazed over, too. Since we’re both riders, let me try to put this in the framework of a motorcycle. Let’s say your central nervous system is built with insulated wires that are edible to the cockroaches that wander the saddlebags and dark, protected areas of your bike. Those wires are like Twizzlers candies that are only edible when the conditions are right.

Let’s imagine you are on a trip, you’ve packed lots of snacks on the bike, and it’s getting warm. The cockroaches multiply like rabbits, happily seizing the day. They eat up all the snacks in the bike, but as those dwindle, the insulation Twizzlers seem like a reasonable option to eat. Eventually, some of the other more civilized fauna join them and meaningful amounts of protective insulation are lost.

Pelland: The bike is me, right?

Barlow: Yes, and at some point the bike starts to have noticeable consequences like a flickering headlamp, a gradual loss of battery charge, or a blown fuse. The harness becomes compromised, as does the vehicle’s dependability. Eventually, the equipment fails.

The harness is a part of you that medical science has yet to find a way to repair; we usually do more harm than good when we try to fix the damage. The copper wires and electronic components are your brain cells and the insulation is your myelin sheath made by the oligodendrocytes. The roaches are your own overactive immune system.

Pelland: So, until a cure is found, I have to keep my mangled, spliced and corroded nervous system?

Barlow: Unfortunately, yes. Something has triggered your immune system to target the “O” cells (oligodendrocytes) in your brain and spine. If you kill off all the roaches (immune system) something worse will occupy the bike and the bike will be no more than a lawn ornament (worm food). You are left loading up the bike with a non-conductive, nonflammable decoy “snack” at regular intervals that makes the insulation appear less appetizing.

This snack is your platform therapy. It doesn’t come from Keebler. It comes in injectable, intravenous and, just recently, tablet forms. None of the treatments are universally effective, and they all have side effects, which range from minor nuisances to death. Side effects can include welts at the site of injection, brain infection, liver failure, depression, fatal cardiac events, and other looming dark clouds. Getting on a therapy or disease modifying drug early and staying on it, has shown to slow the progression of disability.

Pelland: So, I take this disease-modifying snack daily, and it slows the progression of the disease by keeping the so-called roaches busy. But what about when I get another attack or flare-up?

Barlow: If the roaches chew on the harness anyway, you’ll have to resort to a car wash to get them off, but the real recovery time is not measured in hours, but in weeks. This “car wash” is the acute treatment of an MS exacerbation with IV steroids, hormone (ACTH), and sometimes off-label use of other medications that reduce inflammation and shorten the attack duration.

These treatments don’t fix the problem. They simply try to calm the colony of roaches and stop further destruction. Usually, people feel some improvement at four to six weeks after acute treatment of an attack. There is often some amount of permanent destruction and decline. Not always enough that we professionals can measure it, but enough that the patient, family, and often close friends will notice. The more frequent the attacks, the more likely decline or permanent disability will occur.

Pelland: Do you think my ex-wife gave me this disease?