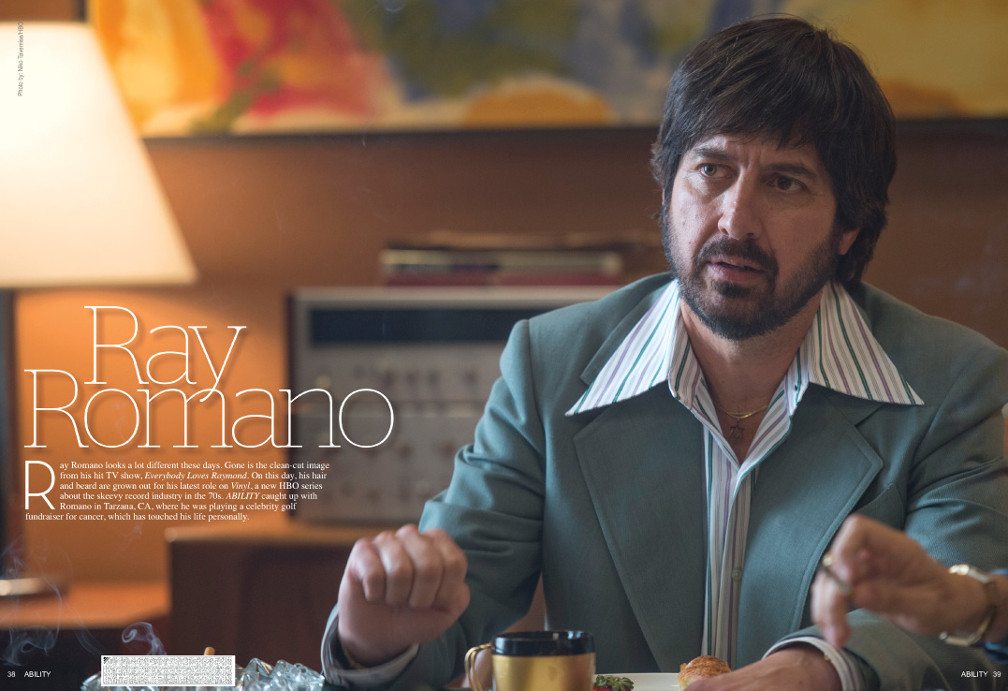 Ray Romano looks a lot different these days. Gone is the clean-cut image from his hit TV show, “Everybody Loves Raymond”. On this day, his hair and beard are grown out for his latest role on Vinyl, a new HBO series about the skeevy record industry in the 70s. ABILITY caught up with Romano in Tarzana, CA, where he was playing a celebrity golf fundraiser for cancer, which has touched his life personally.

Lia Martirosyan: Were you having fun out there?

Martirosyan: So you play regularly?

Romano: As much as I can with a family, a job, and a wife whom I don’t want to yell at me.

Romano: I’ve been a golfer for a long time, but that doesn’t mean I’m good at it.

Martirosyan: How’d you do today?

Romano: Well, today’s a team thing, so the team did well. I had some good shots. And then when I hit a bad shot and if my teammate hit a good shot, we were still okay. I don’t think we won, though. I’ve been playing these things for about 20 years, five or six a year, so that’s somewhere between 100 and 120 of these charity events, and I’ve never won. Given the law of averages, I should’ve won by now. 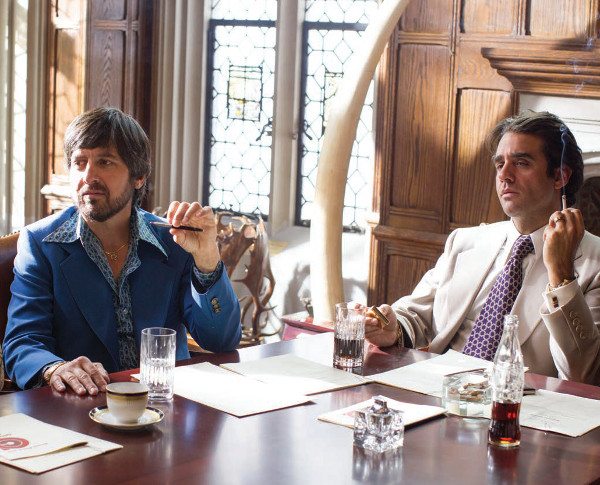 Romano: Well, my wife had breast cancer five-and-a-half years ago, and she knows a lot of the doctors who are involved with this event. Also one of her friends just went through it; she was the one who talked to us about coming today.

I get asked to do a lot of these, and I can’t do ‘em all, but I do as many as I can, and especially the ones where there’s a personal connection. And with this one, my wife is doing fine because of a lot of the people who are here today.

Romano: So any time I can give back by playing golf, it’s a win-win.

Cooper: How long has it’s been since she’s been—

Romano: Over five years. I think the five-year anniversary from when she was diagnosed was March 2015. She’s doing fine now.

Cooper: It’s nice that you feel a connection. I talked to somebody who was playing—I won’t say who it is—but he didn’t even know what the event was.

Romano: Was it one of the celebrity players?

Cooper: Ixnay on the— 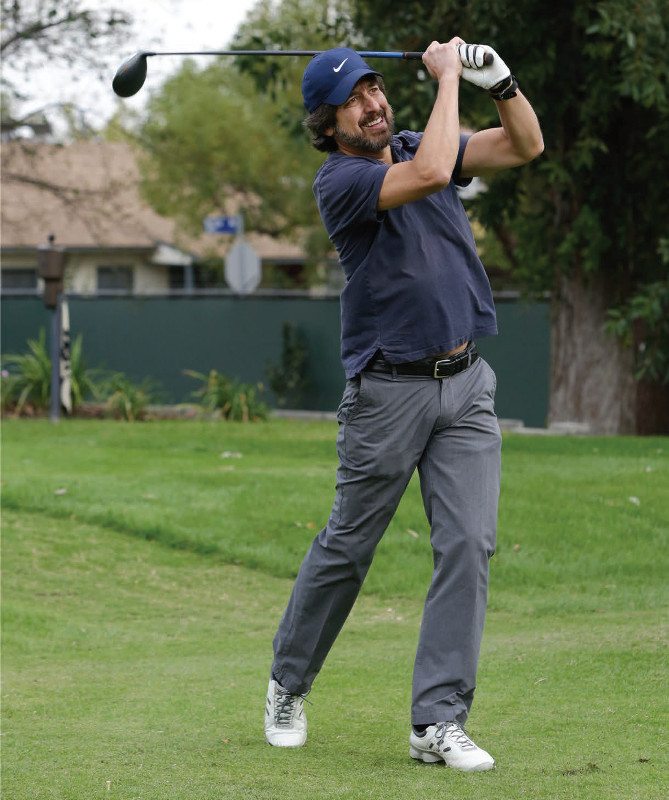 Romano: What I’m saying is, I get asked to do two to three of these a week. But I can only do six or seven a year. There’s business, there’s work; I can’t make ‘em all—And they kind of blend into each other. So sometimes you can get mixed up about which one you’re at. But the ones that I have a personal connection to
I remember.

I used to throw one of these events myself at this club, about 10 years ago. Do you know Kevin James?

Romano: Yeah. We would host it together for whatever charity we wanted to help out that year, like for Alzheimer’s. Also his sister has a degenerative eye
disease, so we did one for her for about five or six years.

Cooper: It’s nice when somebody has a connection.

Romano: It is. But really everybody has a connection.

Cooper: Whatever happened to the event that you used to host here?

Romano: Kevin moved out of town, and it just wasn’t the same without him. Then we started doing comedy shows and raising money that way. We both do stand-up.

It also got harder and harder to do a charity event back then. The economy was very bad; it was around 9/11. So we found other ways to raise money.

We have a nonprofit and need to do more fundraising.

Romano: Like I say, I perform. I also make appearances, or I donate items that charities can auction off. I perform in Vegas, so I can donate tickets for people to come see me and meet me, and a charity will auction them off.

Romano: (laughs) To come see me, not take my kidney. See me in Vegas, come backstage, meet ‘n’greets, stuff like that. Those are pretty popular.

Martirosyan: They are fan favorites.

Romano: Sometimes you can auction off an opportunity to come onto the set. We did that on “Everybody Loves Raymond” a couple of times, where a charity auctioned off a set visit that included lunch.

Cooper: Even though it’s not being filmed.

Romano: Right. Or sometimes Brad Garrett, he played the brother on my show—

Martirosyan: He was good.

Romano: Yes, he was very good, and he has a poker game every other month or so. Occasionally, he’ll auction off the chance to come play in our poker game. Some high rollers will throw a lot of money at the charity, and then they fly in and play with us in Brad’s house and eat pie. His girlfriend makes pie. So we do whatever we can.

Romano: I just finished filming a new HBO series called Vinyl. It’s about the music industry in the ‘70s. That’s why I had to grow all this hair.

Romano: It’s cool. Mick Jagger is one of the executive producers.

Romano: And Martin Scorsese directed the pilot. I was in New York last summer filming it. It’s a little crazy, a little different. There’s a trailer out there online. It’s a lot of stuff I’ve never done before.

It’s all about that sex, drugs and rock ‘n roll world, which is a different role than people are used to seeing me in. Bobby Cannavale is the star, and I play his partner—a record-label owner. It’s fun. It’s like time travel.

Cooper: Did you know much about the industry going in, or pay much attention to it when you were growing up?

Romano: I grew up with that music as a fan of the Stones, the Beatles, Jimi Hendrix, Led Zeppelin and all that. But I was just a teenager back then, so I didn’t really know about the industry. Scorsese gave us a book to read called Hit Men, which was about the guys who ran the business. It was pretty shady, pretty underhanded, pretty out there. I snorted a lot of fake coke for the role—

Cooper: Fake coke? Come on, you can tell us.

Martirosyan: What was it? Flour?

Romano: It was some kind of lactose powder. But believe me, there were some nights I’d go home and something would fall out [of my nose] and I’d say, “Oh, geez!”

Cooper: Can you imagine—

Romano: —if it were real?

Cooper: Driving home or to your hotel—

Romano: —and a cop stopped me? And I tell him it’s just powdered milk?

Cooper: I grew up roughly around the same time you did, and we had no idea how crazy the industry was. We just loved the music.

Romano: Yeah, we didn’t know how dirty it was. Who knows how it is today.

Cooper: Lia is an opera singer, so she knows.

Romano: Are there cutthroats in the opera business, too?

Romano: You can’t be snortin’ as much coke as they did back then.

Martirosyan: But my whiskey bill…

Cooper: Goulet’s in a different category.

Romano: But in the show it’s a record company, so we have our hands in a lot of different things. It wasn’t just rock ‘n roll, it was whatever made money.

Romano: And if you watch and don’t want to see me naked, avoid episode seven.

Martirosyan: I hope I’ll still be able to look you in the eye.

Cooper: It’s cool that you’re playing a role that’s a lot different than what you’ve done before. 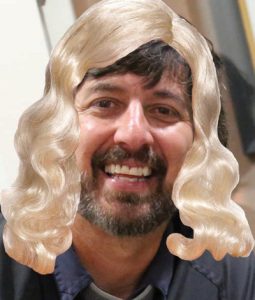 Romano: Yeah, the character’s a decent guy in an indecent business, and there’s a lot of stuff goin’ on, although not so much for me. But in episode seven, we go to Vegas and things get a little crazy. My wife wasn’t happy about it.

Cooper: It’s a closed set, though.

Martirosyan: Of about 30 people.

Romano: And there was a Teamster guy who, after every take, put a sheet over half my ass. (laughs) He had to place it just so.

Cooper: Before you go, Ray, can we take a few pictures?