Rick Howland picked a fine time to visit the east coast: The Canadian actor arrived shortly before Hurricane Sandy devastated the Atlantic seaboard in late October, and was still drying off when we spoke to him. Howland co-stars as Trick on the SyFy TV network show, Lost Girl, a supernatural crime drama about a Fae—the Middle English word for fairy—who is trying to fit in a world of humans. At 4 foot 7, Howland who has osteogenesis imperfecta (brittle bones) has tried, mostly successfully, to fit into the acting world without getting crushed. ABILITY’s Chet Cooper caught up with him recently.

Chet Cooper: Were you affected by Sandy?

Rick Howland: We got quite a bit of rain. Nothing really bad happened here, though; no major portions of the city knocked out or anything.

Cooper: Where do you film Lost Girl?

Howland: In Toronto, on the west end of town.

Cooper: Does most of the cast members fly in, or are most of them Canadian, as well?

Howland: The majority of us are Canadian and live and work in Toronto. Anna Silk, who plays Bo, the lead character, and one of the other actresses were [living] in LA before the series. Anna flies up and stays for the year while we’re in production, and then goes back after we’re done.

Cooper: A lot of productions shoot in Canada because it’s often less expensive with the currency exchange rate.

Cooper: Tell me a about your character on the show. 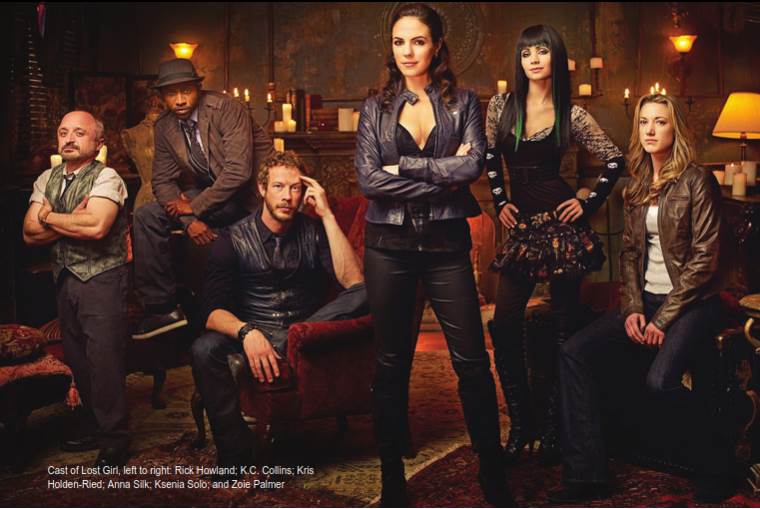 Howland: Trick is 2,000-year-old bartender. He runs the Dal Riata, which is a bar but also a way station. All Fae who come into that part of the world have to check in with him, whether they’re Light Fae or Dark Fae—meaning good or bad. It’s a way of keeping track of everybody. Also, Dal is neutral ground, so when they’re in the bar they can’t fight. They have to get along. In season 2, we find out that Trick is Bo’s grandfather.

Trick used to be the Blood King a long time ago, and he still is a Blood Fae, which means that what he writes in his own blood becomes true, so he can manipulate the future. But there’s always a karmic kickback. At the end of season 1one, he uses his blood to change the future and help Bo, and it inadvertently awakens the Garuda, an even more evil presence than any Dark Fae we’ve ever come across, so we end up having a battle at the end of the second season.

Howland: (laughs) Thank you! I’m aging well. I guess it’s the Blood Fae part of it.

Cooper: Was the show adapted from a book?

Howland: No. Apparently the stunt guys had an idea for a show that was based on a succubus. [In medieval folklore, a succubus is a female demon who appears in dreams, and takes the form of a woman who seduces men, usually through sex.] Their idea was Lost Girl, but darker and even more sexy. I think they approached Jay Firestone, the main producer, with the idea, and he got Michelle Lovretta, the lead writer for the first season, and she put the thing to a fine point, bringing Lost Girl to life.

Cooper: And she wrote it in blood and changed the future.

Howland: (laughs) Somebody did.

Cooper: Now that they’ve revealed that your character is related to the lead, does that secure your role for a few seasons?

Howland: I think so. The show’s going to go on forever, I hope. I’m really enjoying it. It allows me to do a lot of different things, so I don’t get bored. We’ve done three seasons so far. Season three comes out in January. They’re promoting it on Showcase.ca. For season 2 we did a pre-show, and we’re doing that again for season 3. Soon we’ll hear back about whether there’ll be a season 4four. I have high hopes.

Cooper: When you did the last Showcase, what question did fans ask you?

Howland: I often get asked, “Who do I love working with the most?” The truth is I love working with everybody. I enjoy all my scenes with all the other actors, because they all have different elements. With the girls, I get to be a protector and father figure. While with Kris Holden-Ried, who plays Dyson, I get to have these kinds of warrior/soldier-after-the-battle drinks in my lair, and plan what to do next.

Cooper: What I heard you say is that you don’t like working with anyone, and none of the scenes are all that interesting.

Howland: Hey Chet, don’t turn this around on me; I’ve got to come out sounding like a nice guy! (laughs)

Cooper: Do you play Trick as a moderate guy or do you play him as a fellow who’s holding back a temper?

Howland: He’s not mean, but you don’t want to upset him. At the same time, if you need help, he’s going to be there for you. He’s a very open, considerate person. Somebody who’s been around for 2,000 years either shuts down and knows no one, or learns to accept people for who they are. I think Trick’s done that.
Bo, the main character played by Anna Silk, always comes to Trick for information about the Fae world and to get advice. He’s a father figure, and an encyclopedia. At one point the character Kenzi calls Trick “Trickopedia,” because he has all the information.

Cooper: (laughs) Does Trickopedia have a wife?

Howland: He was married a long, long, long time ago, and his wife was a warrior who died in battle. You see a bit of her in episodes 13 and 22, where the Garuda has gotten hold of me and takes me through these flashbacks, trying to convince me that the choices I made back then weren’t the right ones. He shows Trick to himself, now and then, with his wife. We had a daughter and then our daughter gave birth to Bo, who gets raised by humans, discovers that she’s not human and starts trying to figure things out, which is how the series begins.

Howland: Yup. And you come across her eventually. She’s played beautifully by Inga Cadranel. She’s in episode 13 also, which is one of my favorites. In it I end up having to buy this drug to see into the future, and I go to this drug dealer who has lost her vision, and it turns out that she and my character were lovers a long time ago, which she mentions.

Cooper: So she was your “blind” date?

Howland: That’s a pretty bad. But she wasn’t blind when he first met her. I think she went blind later. She’s also a truth-seer; she knows when people are lying. She can flick her long fingernails and make [people] tell her the truth. It’s a cool trait; she’d be a great person to have around.

Being short and having a disability, it’s been a battle to break down barriers, but I’ve found directors, writers and producers who like casting outside the box. I get roles that are anybody kind of roles that are written with depth, and they’re also for people who look different. That’s great. 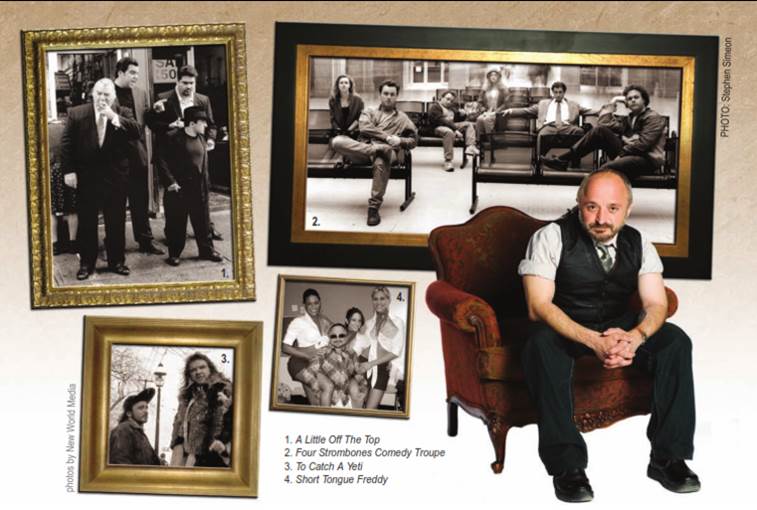 When I was very young, I spent a lot of time in and out of plaster casts. I have osteogenesis imperfecta—brittle bones—over 80 broken bones since I was born. I’ve also had surgery a bunch of times. So I spent a lot of time watching television and I thought to myself at some point, ‘If I want to make a difference in this world, if I want to not feel like I’m so different when I’m in a wheelchair or on my crutches, I’ve got to