RUDERMAN — A Family with a Strong Foundation 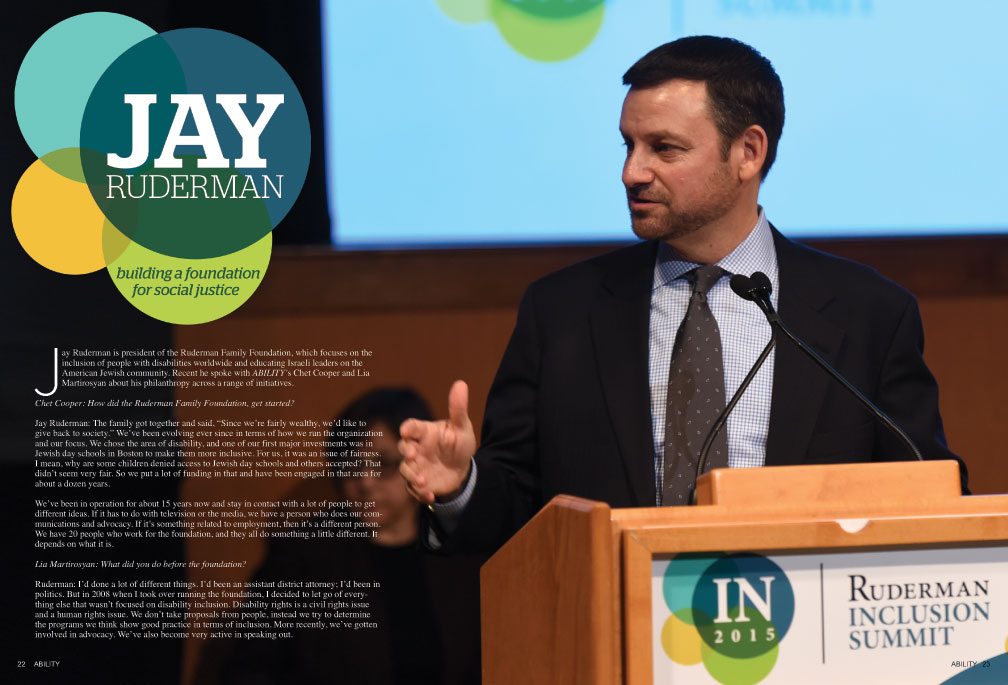 Jay Ruderman is president of the Ruderman Family Foundation, which focuses on the inclusion of people with disabilities worldwide and educating Israeli leaders on the American Jewish community. Recent he spoke with ABILITY’s Chet Cooper and Lia Martirosyan about his philanthropy across a range of initiatives.

Chet Cooper: How did the Ruderman Family Foundation, get started?

Jay Ruderman: The family got together and said, “Since we’re fairly wealthy, we’d like to give back to society.” We’ve been evolving ever since in terms of how we run the organization and our focus. We chose the area of disability, and one of our first major investments was in Jewish day schools in Boston to make them more inclusive. For us, it was an issue of fairness. I mean, why

are some children denied access to Jewish day schools and others accepted? That didn’t seem very fair. So we put a lot of funding in that and have been engaged in that area for about a dozen years.

We’ve been in operation for about 15 years now and stay in contact with a lot of people to get different ideas. If it has to do with television or the media, we have a person who does our communications and advocacy. If it’s something related to employment, then it’s a different person. We have 20 people who work for the foundation, and they all do something a little different. It depends on what it is.

Lia Martirosyan: What did you do before the foundation?

Ruderman: I’d done a lot of different things. I’d been an assistant district attorney; I’d been in politics. But in 2008 when I took over running the foundation, I decided to let go of everything else that wasn’t focused on disability inclusion. Disability rights is a civil rights issue and a human rights issue. We don’t take proposals from people, instead we try to determine the programs we think show good practice in terms of inclusion. More recently, we’ve gotten involved in advocacy. We’ve also become very active in speaking out.

Cooper: Where did the money come from? A corporation? Real estate?

Ruderman: My dad founded a medical-technology company called Meditech, and then moved away from that and spent most of his career in real estate. He was successful in different ventures. As a family, we’re actively involved in our philanthropy; we’re not just in the check-writing business.

Cooper: That’s good. It seems like you’re going into different areas, different types of disabilities. You have a dynamic foundation that’s making a difference.

Ruderman: We’re trying. We want to move the needle. I’ll tell you, the deeper I get involved, the more I feel like the world is so big and complex. People think with social media, it’s easier to reach people, but people sometimes just feel bombarded. We’re trying to do more networking in the disability community. I think the more we work together, the more members of Congress, the administration, the media, etc., have to pay attention to us. If we’re all in our different silos though, we’re not as effective. Our foundation is doing our part to add value.

My nephew was diagnosed with autism. His diagnosis brought the issue closer to home for our family. Then my dad developed a disease called alpha 1-antitrypsin, which gradually reduced his lung capacity. He became more and more disabled, which was also so personal for our family.

Martirosyan: All families are affected in some way or another.

Ruderman: When I do public speaking, I ask the audience, “Who has a family member, a neighbor, a friend with some form of disability?” Every single hand goes up. We’re all connected. One of our grantees in Israel is an organization call Access Israel. The guy who runs it is a former helicopter pilot who was injured in an accident. He says that people with disabilities is a group that some day we all will join. We don’t think of it that way, but it’s true.

As people live longer, disability becomes more of an issue. And there seems to be more children born with a disability. I don’t know if it’s true, or if we’re just better at diagnosing certain disabilities than in the past.

Cooper: A lot of people don’t identify the word “disability” with a certain health condition or situation because it’s perceived as a negative that means completely nonfunctioning. It’s sometimes a challenge to get acknowledgement, even from people who are awakened to the fact that they, or a family member, have a disability in terms of what the Americans with Disabilities Act (ADA) Amendment Act says.

Ruderman: I’ll tell you one thing: our foundation doesn’t define “disability” for a reason. One is because the disability community is extremely fractured on the subject. About 20 percent of the population has some form of disability. Yet when we started getting involved in advocacy and pulled together some of the leading disability organizations in Washington, they were focused on a particular disability: a learning disability, autism or a physical disability. But they didn’t seem to see themselves as being connected to each other.

Cooper: We’re quite aware of that. One of the things we’ve been trying to do with the magazine over the past 20-some years is bring everyone under one voice, which I think is so important. The fact that they miss that is frustrating.

I’m curious. With your background in law, did you have any connection to the ADA or accessibility prior to taking over the foundation?

Ruderman: Not really. My background is in criminal law, although since getting involved I’ve gotten to know more about the ADA. We have a council of advisors whom we turn to when we have questions. One of them, Tony Coelho, used to be majority whip in the House and was one of the authors of the ADA. We recognized Tom Harkin, former senator, with an award we give every year in my dad’s memory. We got to know him a little bit. So I’ve gotten to know people who were pretty instrumental in the ADA.

Recently, we released a white paper on Hollywood and disability, which revealed 95 percent of the characters shown with a disability on television are played by ablebodied actors. We did that with Danny Woodburn, who is an actor and an activist. The issue came up of how to define disability, because we’d never defined it. So we went back to the council, and they said, “Use the definition given by the ADA. It’s the broadest definition. It incorporates everything.” It was a difficult exercise for us because there were things we just didn’t think about and had never focused on. But when you’re looking at characters, and you’re looking at their disabilities, then you have to think about it.

Martirosyan: I got called in to an audition for Google for people of all sorts of shapes and sizes and abilities. It’s interesting that they’re branching out—

Ruderman: That’s great. I know Google has put an emphasis on trying to do something on this issue. Congratulations.

Ruderman: Yes. We did a white paper on television. We do white papers to target traditional media and social media to get a discussion going. Now we’re doing a follow-up event with different studio heads and actors; Gail’s going to moderate it at an upcoming event in Los Angeles. We’d be happy to have you involved. Our philosophy is not to recreate the wheel. We’re trying to work with disability marketing strategist Tari Hartman Squire, director Jenni Gold and, of course, Gail. We’ve connected with people from the Annenberg School for Communication and Journalism at USC. There are many different people involved. And then the actors’ union, SAG-AFTRA, has a committee on disability, and they’ve connected with us. We’re trying to pull in different people who’ve been active in the past. Danny Woodburn and actor Robert David Hall have been involved with the union for a while.

Cooper: Robert has probably been the most active of the actors. More recently, Danny has become very active. Allen Rucker had been involved too; he’s a writer and author of The Best Seat in the House about waking up one morning paralyzed for life. If you’re able to bring the key players in, they can make decisions and create awareness around disability issues beyond what currently exists.

We featured Danny Woodburn. Almost everybody you mentioned, Tony Coelho, when he was running the American Association of People with Disabilities, Gail Williamson, and actor Robert David Hall have been featured in the magazine. Senator Harkin wrote a column for us for probably 10 years before he retired, and Allen Rucker wrote for us regularly, as well.

Ruderman: We get the magazine, and I usually go through it. But I’m going to make an effort to go through it more thoroughly now.

Cooper: Let’s talk more about the work you’re doing and the organizations you grant. How much do you fund a year? ...
Login to read the full article. SIGN UP HERE FOR YOUR FREE MEMBERSHIP
If you are already a member, welcome back! LOGIN HERE