In Mu Mengjie’s 49th birthday last spring, people in the rural area where he lives threw him a birthday celebration for his coming 50th year. Mu was named one of China’s 10 most inspiring people for his commitment to educating children who, too often, have been turned away from conventional schools.

Early on Mu’s birthday day, his cell phone rang nonstop. Calls came from students wishing him good cheer. Later, when the party got under way in his front yard, more than 70 former students came back to fete their beloved teacher, who once invested all his savings to fund a private school for the blind.

The students brought Mu up to date about what they were doing and their personal successes. Liliang Zhou said, “My sister’s family was relatively poor, so I helped pay for my nephew’s college tuition with my income, which my Mom could never imagine I’d ever earn.” Zhou owns a massage shop with a monthly net income of about $800.

By noon on the day of the bash, everyone was served noodle soup and a glass of bubbly to toast their cherished teacher and wish him long life. Then he raised his glass to toast his students, in return, also wishing them many fruitful years. One of the guests was sighted and a friend of a former student, who said he’d often heard his friends talking about their teacher, and wanted to meet him.

“These students are doing great!” the sighted guest said of the students who are blind. “If they had not received any education from Mu’s school, they may never have gotten out of their houses, earned enough to support themselves, or had the happy lives they have now.”

After the party, when students went back to their work places, Mu reflected on his dream 14 years ago to open a school for kids who are blind, to ensure they got an education. Today he has taught hundreds of pupils on his village campus of 2.5 acres.

NO SCHOOL FOR MU 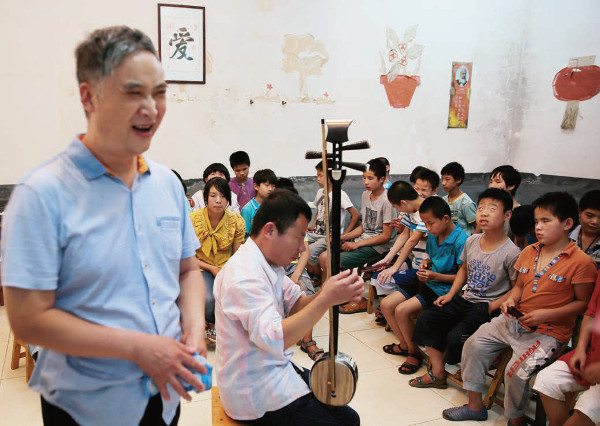 In 1973, at the age of eight, Mu did not have a chance to attend a school. Back then teachers didn’t know how to educate him because he could not see the pages of books or the blackboard, even though he was a good listener.

He started learning at home by listening to his sister read her school work aloud; gradually he learned to recite the famous Chinese poem, Jingyesi. He also learned to count to 100. With those skills he thought the school would accept him, but it still refused him. Mu was in tears, and his father had to drag him away, saying: “Stop crying. You have to accept your fate. Your Mom and I will take care of you forever.” The memory of that day was more painful for Mu than losing his eyesight, he says. Born in 1965, in Xingtai City, Hebei Province, a rural area east Xin Zhaicun, Mu was 4 years old when he got the eye disease, retinal atrophy.

At 7, he became completely blind. His father was afraid of him being lonely at home, so he let Mu take care of the family’s sheep. One day, the sheep went into the barley field, and the village leader was upset and scolded his father, saying, “The blind kid cannot even take care of sheep; what can the blind do?”

Mu’s father apologized, but still had to pay a fine, which entailed selling his sheep. After the incident, Mu became determined to acquire the skills to earn his own living. At that time, in rural areas, a person who became blind was considered unlucky to others. If a blind person went into someone’s home, they were thought to bring bad energy. So Mu could only eat in the streets. He had to sleep in a bullpen.

He had to overcome a great hardship to learn skills to become a street musician, an acupuncturist, a masseur, and the Yi Ching Braille fortune telling. In 1979 he, along with the master storyteller musicians in Baoding, heard that there was a school that taught blind students. He rushed there. After a simple arithmetic exam, he was accepted by the school, but could not afford the tuition. He remembered his masters who taught him various skills for free. It instilled a belief in him that people who are blind should help one other.

After he walked out of the school that he could not afford, he vowed: “If I make enough income in the future, I will run a school for the blind free of charge. I want the blind children in rural areas go to school!” At 15, he began to work as a singer and storyteller. His stage was streets corners; train and bus stations; and small hotels in villages. Two years later, he had saved enough money to help reconstruct his parent’s home. A few years after that, he built his own home, and his family had become the wealthiest in the village. When he had saved $85,000, he pursued his dream to open a private school for people who are blind.

In 2000, Meng Jie School for the Blind was formally established in the southern region of Hebei Province and is still the only private school for special education in that area. It fills the gaps in basic education in rural areas. The school has an open-door policy for both the blind and kids with cognitive disabilities. There are no interviews, no tests, no age limit, and no charge for tuition. The school also accepts students who can pay full tuition and fees, which helps subsidize those who don’t pay. Students who are blind can stay and study as long as they need to.

“No matter what, as long as a teacher teaches patiently, a student always progresses,” says Mu. In 2014, the school had 91 blind students. Children in lower grades loved to play hide-and-seek, Mu observes. They learned how to touch Braille books and proudly shouted: “We can read and feel smart.” When they went out, one by one, teachers—most sighted—would help them. Everyone was happy to learn and enjoy the day. Guozhong Shi was the first blind student who graduated in 2002.

He goes back to the school at least three times a year, once for Mu’s birthday, once for Qingxiang Cao, his wife’s birthday and once for New Year’s. At one point, Jiahong Li, then a 4-year-old girl, was the youngest student and followed a first grade curriculum. She came from a distant village, and her mother, Liting Chen, having low vision with a disability in her hand, also took secondary school courses in massage. Liting Chen had had rubella during her pregnancy, which caused her daughter to be become blind shortly after birth. No kindergarten would accept the girl, and she spent much of the day screaming at home. One day, her grandmother was watching a TV program called, Inspired China, where she saw something about Mu, and wrote down his name.

She asked neighbors to help her find him through the Internet. After she got his phone number, she called the school to make sure they could accept her young granddaughter. Then Liting’s father took his daughter and granddaughter to the school—over a 370 mile journey. To facilitate her daughter’s care, Liting lived with the child in one room at the school, and the girl was finally able to attend kindergarten. 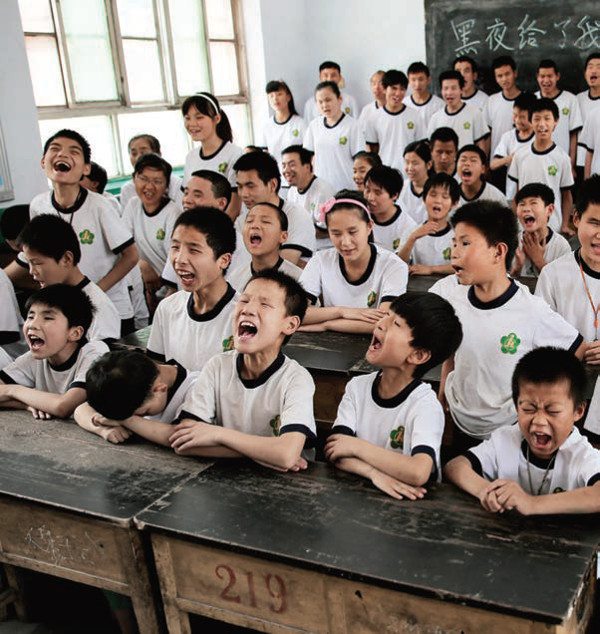 In 2008, the school faced challenges. Many teachers and students left as a result of implementation of governmental subsidies for rural public schools, which waived tuition and books, and reduced admission fees. After that policy took effect, Mu’s private school did not have a low-cost advantage over the public schools. So, many children who were paying full tuition and fees switched to public school, and Mu’s school lost a source of income. Unable to pay his teachers; he lost many of them.

In 2009, Mu stepped up his own efforts to regain financial footing for the school, working overtime at acupuncture and massage, offering counseling, and taking bank loans. In the end, the school only recruited those who are blind. Mu remained optimistic saying, “As long as there is a patient, someone will find me doing acupuncture; as long as there is an unhappy person, someone will need me to do consulting; I can earn money and sustain our school’s operations.”

He recruited his son, daughter and niece to teach. His niece’s wages were less than $14 per month, and his son and his daughter worked for free. Mu Huaxin, his daughter, graduated from high school and attended the Handan Special Education Teachers Normal School; his niece, Mu Lifei, majored in computer science and graduated from college in 2008.

Mu Mengjie said to them, “In the Mu family, my generation has three blind children, your father and I, and your Aunt. We all suffered a bitter blind life; we have to help the blind.”

KIDS BEING HELD BACK

Mu Mengjie has run the school for 14 years with students from rural areas, the majority coming from poor families. “These kids have never been to a school, and they were being held back at home,” Mu finds. Data from a “Protection of Disabled Persons” law enforcement inspection report shows that until 2012, the proportion of children who are blind or deaf or who have an intellectual disability are the least likely to receive a compulsory education, at a rate of only about 20 percent, in some provinces. The data were not specific to the implementation of the rural areas, but the poorer they were, the less they could afford school.

Mu’s school continues to get good coverage in the news media, but many rural people do not read newspapers or watch the news. In the process of searching for children to enroll, Mu learned that there were a lot of cases where many children who were blind were even less fortunate than he had been. Some parents tied the children to the bed or locked them in the cellar. Many parents never taught them such skills, as walking, eating, dressing, bathing, toilet skills, etc. “In fact, they are not even treated as human beings” Mu said. ...
Login to read the full article. SIGN UP HERE FOR YOUR FREE MEMBERSHIP
If you are already a member, welcome back! LOGIN HERE
byYing Li