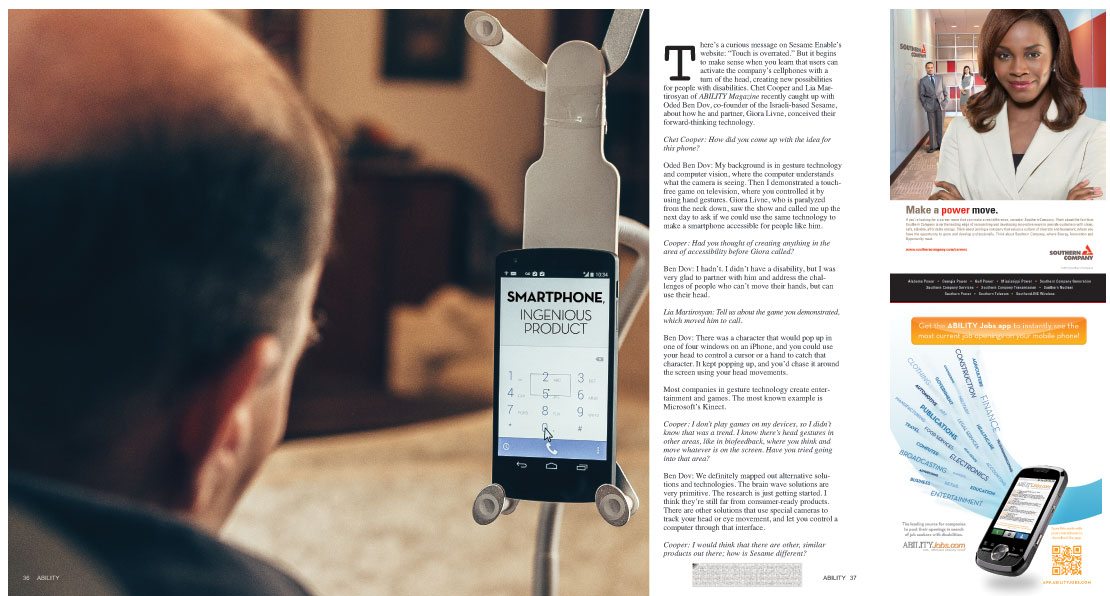 There’s a curious message on Sesame Enable’s website: “Touch is overrated.” But it begins to make sense when you learn that users can activate the company’s cellphones with a turn of the head, creating new possibilities for people with disabilities. Chet Cooper and Lia Martirosyan of ABILITY Magazine recently caught up with Oded Ben Dov, co-founder of the Israeli-based Sesame, about how he and partner, Giora Livne, conceived their forward-thinking technology.

Chet Cooper: How did you come up with the idea for this phone?

Oded Ben Dov: My background is in gesture technology and computer vision, where the computer understands what the camera is seeing. Then I demonstrated a touchfree game on television, where you controlled it by using hand gestures. Giora Livne, who is paralyzed from the neck down, saw the show and called me up the next day to ask if we could use the same technology to make a smartphone accessible for people like him.

Cooper: Had you thought of creating anything in the area of accessibility before Giora called?

Ben Dov: I hadn’t. I didn’t have a disability, but I was very glad to partner with him and address the challenges of people who can’t move their hands, but can use their head.

Lia Martirosyan: Tell us about the game you demonstrated, which moved him to call.

Ben Dov: There was a character that would pop up in one of four windows on an iPhone, and you could use your head to control a cursor or a hand to catch that character. It kept popping up, and you’d chase it around the screen using your head movements. Most companies in gesture technology create entertainment and games. The most known example is Microsoft’s Kinect.

Cooper: I don’t play games on my devices, so I didn’t know that was a trend . I know there’s head gestures in other areas, like in biofeedback, where you think and move whatever is on the screen. Have you tried going into that area?

Ben Dov: We definitely mapped out alternative solutions and technologies. The brain wave solutions are very primitive. The research is just getting started. I think they’re still far from consumer-ready products. There are other solutions that use special cameras to track your head or eye movement, and let you control a computer through that interface.

Cooper: I would think that there are other, similar products out there; how is Sesame different? 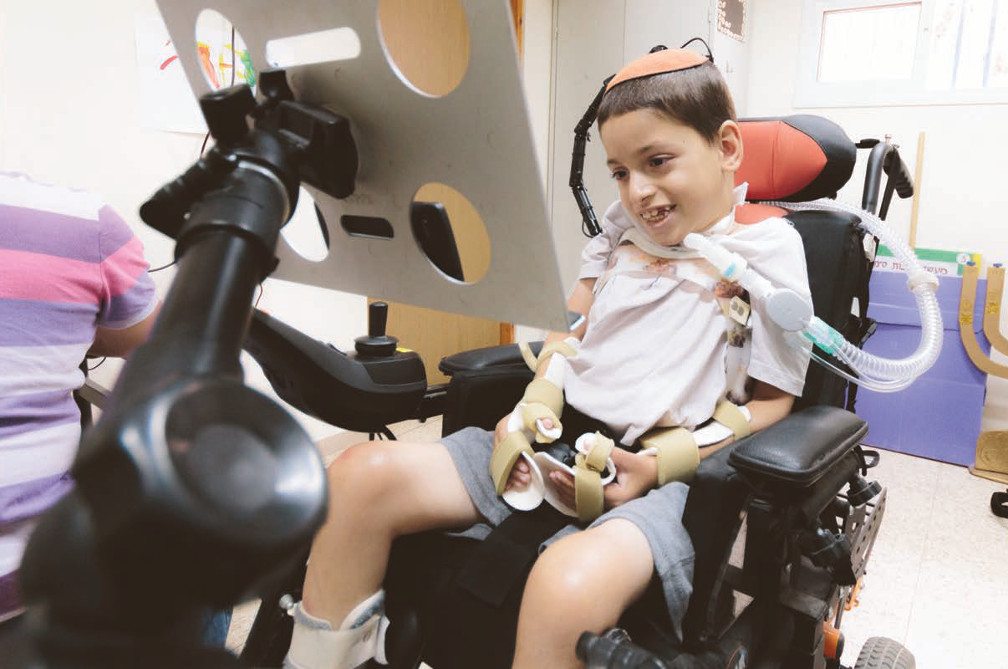 Ben Dov: We’re different in that we went after smartphones. There was one solution that was available for Windows tablets, but that’s still not a native mobile platform like the Android or the Mac IOS. Unfortunately, Microsoft is still behind in that way. So going after an Android smartphone in the Android ecosystem is something really unique to Sesame. Beyond that, we’re using the standard built-in cameras you can find in any smartphone. It’s the equivalent of a simple web camera that’s connected to a computer. It doesn’t require special hardware like our competitors’ products, and that brings with it several benefits. We can price it much more affordably, and the solution is more elegant.

Ben Dov: You don’t need extra hardware or extra cables. We’ve received feedback from users that having a phone that looks just like everyone else’s is a good thing. They don’t want to stand out with their accessibility device. And you wouldn’t know that Sesame was a special accessible phone just from looking at it. It’s a standard smartphone with our software installed.

Cooper: What phone do you use?

Ben Dov: We started off with Google’s Nexus 5, but it’s being discontinued, so we’re now searching for the next version.

Cooper: Your product is not an app, right? It’s a platform built on a smartphone.

Ben Dov: That’s right. We’re looking to make it into a downloadable app, but currently it’s a platform that needs special installation. We’re talking to carriers and phone manufacturers to have the technology available on their devices. 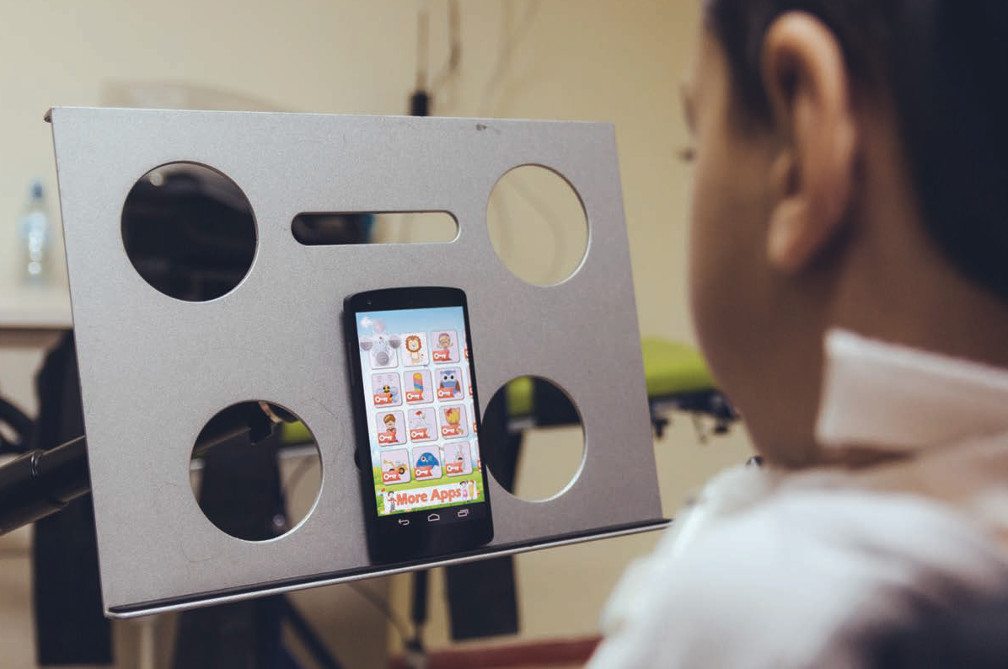 Cooper: I know the prices might change going forward, but at the moment what’s the cost for someone to get one of your phones?

Ben Dov: Currently they’re going for $700, and you get the smartphone pre-installed with our touch-free interface.

Ben Dov: We founded Sesame together. I came to the company with the technical know-how, and he came, obviously, with a need. We began with founders’ money, some of which was his insurance money from the accident.

Cooper: What is his background?

Ben Dov: Giora is what’s called a high-current engineer, which means he deals with environments such as power plants and power grids, where the current is huge. He’s actually built power plants. He was released from the Navy where he was a ship commander. We both have the same alma mater; we both graduated from the Technion. He lives in my hometown, a street away from my parents, which is quite serendipitous. (laughs)

Ben Dov: Yeah, in Israel you get that a lot. It’s a small country. ...
Login to read the full article. SIGN UP HERE FOR YOUR FREE MEMBERSHIP
If you are already a member, welcome back! LOGIN HERE