Journalism assignments come in various shapes and sizes. Sometimes we get asked to go to the trenches of the red carpet; endure the harsh environments of a phone interview; and at times, squint at the mysterious silhouette of a man during a Skype meeting. On occasion, we get an invite to cover a story in the warm desert breezes of a refugee camp along the fringes of a war zone.

You can imagine my elation when the call came in. Journalism on the road. With my incurable case of wanderlust, sans doctors and medical tests waiting to greet me in the horizon; count me in.

As we prepared to be flown to destinations unknown, we were ready mind and body to be experiencing harsh desert conditions. But prior to leaving, other plans were in motion.

A little background: The late Sheikh Zayed was the founder and first President of the United Arab Emirates (UAE). His widow, Sheikha Fatima Bint Mubarak, is a shining humanitarian, sharing her resources and healing vision with the multitudes. Known as the Mother of the UAE, she’s spearheaded many projects concerning women’s rights, children’s health and disabilities. Her commitment led to the recent opening of the largest rehabilitation center for children with disabilities in Beit Ummar, an Arab town located eleven kilometers northwest of Hebron.

To get there, we first flew to Tel Aviv and asked that our passports not be stamped as there is such conflict going on in adjacent parts of the world that evidence that you’ve traveled to one country, might get you in trouble when you try to enter the next. Apparently so many passengers make the same request of the clerk behind the glass window in customs, that she matter-of-factly informs us that they no longer stamp passports.

The moment takes me back to my childhood when we had World Day at my elementary school. As it approached, we kids got so excited.We made our own passports with our little photos inside, and got to “visit” different countries—with their flags, food and flavors—at booths inside the school gym. We represented our family’s country of origin, went around and learned a bit about our classmates’ as well. Getting my passport stamped and visa for entry from all the countries stimulated my sense of adventure. But it can be disappointing when you travel a distance, eager to meet the people, and find that nations are at such odds. I didn’t allow myself to acknowledge how I felt about this, so I made a few jokes with my colleague and let the moment pass.

Upon our arrival, we met with two fellow journalists: an English man from Scotland and an American woman from Oregon; as well as our lovely bride-to-be hostess, who spoke Arabic and like us, was new to the region. Our group got into a van and headed towards our destination, noticing the rugged beauty of the landscape.

We had to stop at what would be the first of a series of checkpoints, and after a long drive we finally pulled up to the Intercontinental Jacir Palace in Bethlehem, a sight for our sore, 20-hour traveling eyes. They were graciously putting us up at the best hotel in little ol’ Bethlehem. It turned out that besides our rooms, this palace had no central heating. As far as my poor blood circulation was concerned, this was roughing it. Imagining anyone having to sleep outdoors in this temperature made it hard to swallow my warm saliva that night.

The following morning we all met in the cold lobby and journeyed towards Beit Ummar. Occupied Palestinian territories, political complications and a sad reality for the inhabitants of the region.There were so many walls: walls separating land, walls separating people—patrolled by teenage guards carrying what looked like toy machine guns. Clearly the domino effect of war is harshest on its youngest residents.

Finally, we headed towards the Sheikha Fatima Rehabilitation Centre, driving through one of the most picturesque hills and valleys, crested with fresh snow, owing to unprecedented cold weather. The roads grew tighter, bumpier and closer to the edge. We arrived at the center and were greeted by quite a number of people. Among them were Hana Qaimary, a Ministry of Social Affairs consultant, who was our guide through the center. She had a pleasant face with dark features and a sense of conviction when she spoke. Ironically we had crossed paths with her some months back in New York City at the United Nations during the Convention of the Right of Persons with Disabilities.

Our group gathered in a room and it seemed like everyone had a camera or phone with a camera on hand. After the representatives of the center introduced themselves, Qaimary said, “because we don’t have so much time, maybe it’s good to give you a brief summary about the center.” She also wanted to know more about us, and what we hoped to learn during our visit so she would know what to concentrate on during our tour. 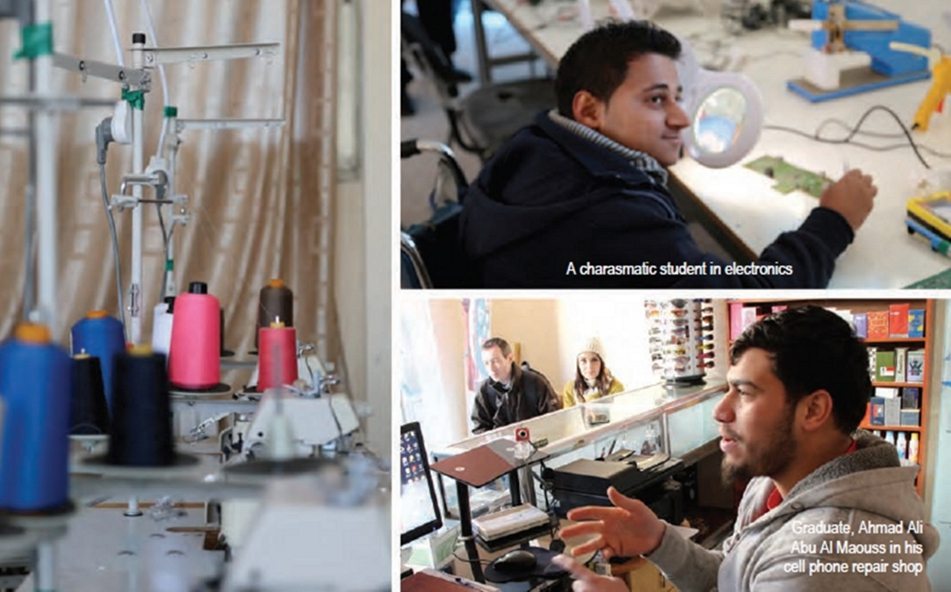 I tensed up a bit, performing a prepared aria on stage and pulling questions out of a magical hat are two different animals. The English man brought up good points, the Oregon gal was poised. Finally, it was my turn, and thankfully a question popped into my head at the last possible moment: “What happens to the 15 to 35-year-old male and females when they graduate and they have to go out into the real world?”

“Our goal is not just to give them a vocation that they like and then we leave them alone,” Qaimary replied. “No, no. Our policy is to continue, even after they graduate.” She said they keep their graduates in the loop, checking in to see if they’re encountering any difficulties, and trying to help them resolve them. “So our aim is not just to learn the vocation here and then that’s it,” she went on. “No. We want to make sure they are living independently. This is our goal. This is the empowerment we want.”

Instead of sending graduating students off with a handshake and a certificate, the center sometimes underwrites their fledgling businesses with small loans as a way to make sure they have work, while addressing the region’s high rate of unemployment.

Our group went further into the center and learned more about the daily activities. As the day progressed, we got to see how they worked with students, families and the community at large. They had established a number of workshops, including sewing, computers, electronics, cosmetology and carpentry.

Qaimary is a passionate advocate for inclusion throughout the region. She sought to help us understand what the vocational center has meant to everyone, including those with disabilities and those without. Of the 85 students, 65 have a disability and 20 do not.

Since it was the holidays, only a couple of teachers and a handful of students were able to make it out on the day of our visit. One of the students was a shy young boy learning carpentry. He was among the 20. I asked him about his experience working with classmates who have disabilities. He simply replied that people with disabilities tend to be more positive, but other than that he knew of no difference between him and the other students. It was a feel good moment.

Qaimary said that she had a surprise in store for us: She had arranged for us to visit one of the center’s graduates who’d opened a new cell phone repair store. The steepness of the road leading up to Ahmad Ali Abu Al Maouss’s shop atop a cozy hillside village was concerning. He admitted that he had his own transportation issues. He gets about in a wheelchair after having sustained spinal cord injuries following a fall off his uncle’s roof. Self-sufficient, he drives himself to work, with his brother as a part of his support system.

The shop had all sorts of parts and gizmos for cell phones, with a few cigarette boxes and lighters for, I’m guessing, his regular customers. Everything was neatly organized and custom suited to the shopkeeper’s needs, with a glass counter up front for transactions, and room towards the back for Ahmad to do the repairs. We chatted and learned a bit about his life as loudspeakers from nearby mosques delivered adhan (the call to prayer), as they do five times a day. Our conversation with the shop owner drew a small, curious crowd, as Ahmad spoke of his gratitude for the financial support of his father, and for the tools the center had given him.

The people involved in building the center who persevered through over seven years of construction delays and political red tape, should be commended. 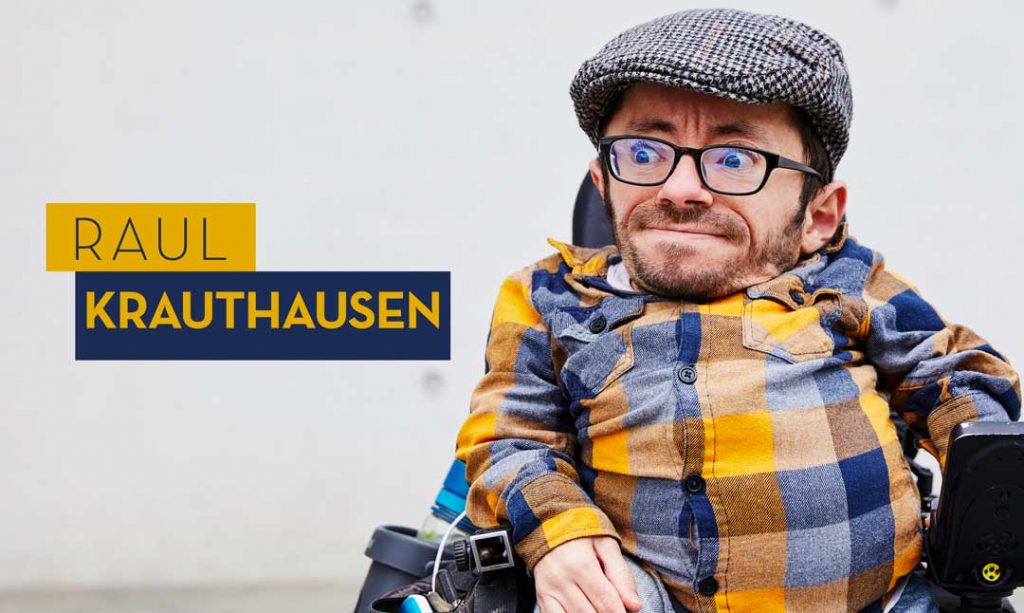 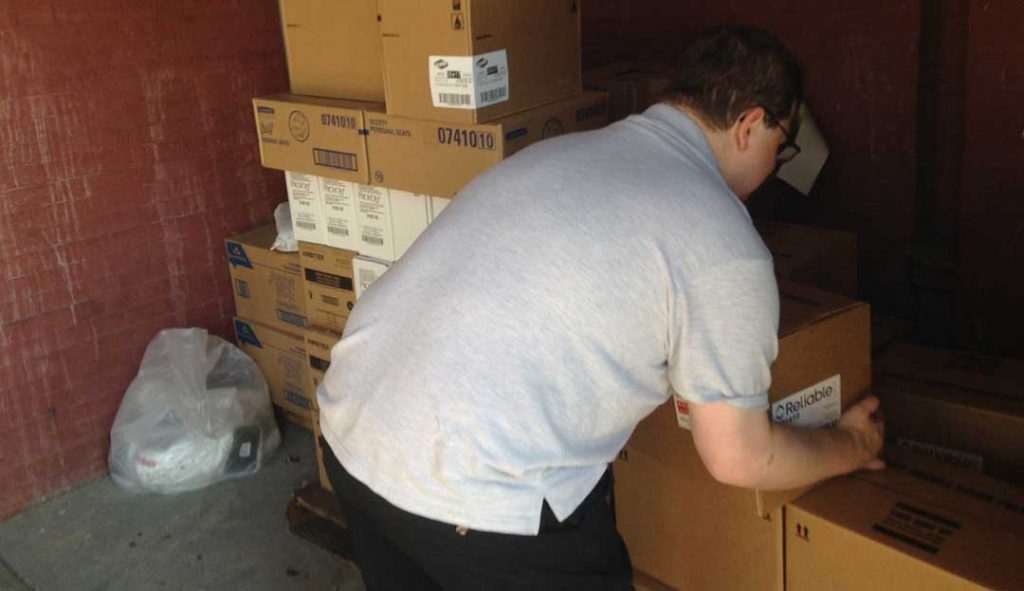