It was fall 2001. The United States national sled hockey team was finishing one of their first training camp weekends, which were grueling four-day marathons on the ice as the team paraded around to different cities once a month in preparation for the Paralympic Games.

The squad was closing down a scrimmage and all that head coach Rick Middleton could see was a bunch of his guys skating all over the ice.

“After the first couple of camps, we’re out there running some scrimmages and they were all over the place and out of position. I couldn’t tell who was on what team and who was playing forward or who was playing defender,” Middleton recalled. So he turned to his friend and assistant coach Tom Moulton. “I don’t think we have enough time.”

In less than six months, the U.S. squad was going to be the host team for the 2002 Paralympic Games in Salt Lake City. The team needed some stability.

The former coach had just resigned. The team had won just one international game ever. And despite all that, the team was guaranteed a spot in the Games as the host.

Enter Middleton, a former NHL player for the Boston Bruins who was recruited back in 2001 to coach the U.S. national sled hockey team. A friend connected with the sled hockey program called him, explained the dire situation, and asked about his interest in coaching.

“I didn’t even have a clue what sled hockey was when he called me,” Middleton laughed. “I just heard hockey and Paralympics and thought yeah, I’d be interested.”

The phrase “the rest is history” never has been more applicable.

Middleton magically pulled together the biggest group of underdogs to compete in the 2002 Paralympic Games. He transformed them from merely chasing the puck into a well-oiled system of hockey players. He had no measuring stick to gauge their progress. And he skated his team right into Salt Lake City as the lowest seed only to go undefeated and win the first ever gold medal for the United States in sled hockey.

“This is the best sports story that nobody knows about,” Middleton said. 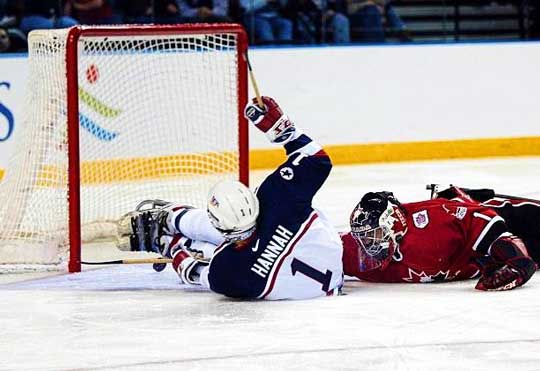 Gary Brandt and Yaron Kaplan hope to change that.

They are the co-producers of the film Tough Sledding: The Movie, which aims to capture the little-known story of the 2002 Paralympic sled hockey gold medal victory by the U.S. national team.

Brandt grew up playing hockey in Canada and met Middleton about 10 years ago when fundraising for his son’s college hockey team. Middleton, a legend with the Bruins, leads the Bruins alumni network and helped Brandt with his son’s team. They became friends and later business partners on a couple of different ventures. That’s when Middleton shared a story about the time he coached a team to the gold medal.

“I know a lot about hockey. I played hockey. I pride myself in knowing the game,” Brandt said. “I didn’t know anything about this story. The drama was well beyond the success story of rags to riches and we won the gold medal. This was about grit, perseverance, and fulfillment.”

And so, Brandt contacted an old friend in Los Angeles and shared the story.

“I call up Yaron and asked if we could get this done in like six months. He’s looking at me like I’m crazy,” Brandt laughed. “I’m taking a business approach to this and just want to knock it out. I’ve learned a lot in the last three years about the filmmaking industry. We’ve come to the realization that we want to do this right.”

Brandt and Kaplan partnered with Middleton to recreate the story of the 2002 unexpected gold medal run, which takes on a Miracle feel from the recreation of the 1980 Olympic Games unexpected ice hockey gold medal by the United States. Only, the 2002 Paralympic team wasn’t expected to even compete.

So how do you make a compelling movie when you already know the ending?

“It’s like the Titanic challenge: You know the boat sinks,” Kaplan said. “Here, you know how it ends. The question is, how do we tell the story about how to get to that end that you know is going to happen?”

The key to preserving this story, according to Brandt and Kaplan, was focusing on the relationships and personalities as they pulled together to overcome personal and team challenges.

Kaplan has 20 years of experience in filmmaking, but this is Brandt’s first go.

Given the storyline, the co-directors are seeking a cast mostly comprised of people with disabilities, and that’s rare in Hollywood.

“We’re doing a movie where the majority of people in speaking roles have disabilities,” Kaplan said. “I think one of the reasons we’re growing is because we have the roles ready. You’re not just putting yourself on tape and somebody can watch you when there’s an opportunity in a movie or TV show in the future. In the here and now, you have an opportunity to be in this specific role in the movie.”

They have partnered with several organizations, including abilityE.com to cast actors with disabilities. Paralympic athletes are also being encouraged to audition—which are currently being held solely online due to the COVID-19 pandemic—to fill the more technical athletic shots.

“What we didn’t want to lose sight of is the importance of inclusion to both Hollywood, to the actors and athletes, to the athletes from the 2002 team,” Brandt said. “They were ignored back then, and they continue to be ignored because people are unaware of their story.”

That story starts with the emergence of Middleton as coach.

Middleton inserted a system of hockey within the team, which had been missing prior to his arrival. Before, teams from all countries tried to out-skate one another with the fastest athletes securing the puck, breaking away, and scoring. Middleton saw he had skilled athletes, but he had to sharpen their skillsets.

“They all had different levels of abilities to skate, shoot, pass and understood the fundamentals of the game, but nobody had ever taught them a basic system of how to work together on the ice,” Middleton said.

He discovered most goals were scored within 10 feet of the net, so he taught them an old system the Bruins ran in the 1970s of dumping the puck inside and trying to work it toward the net.

“They don’t use it a lot today, but in the old Boston Garden, it worked well,” Middleton said. “I always told them it’s a lot better to know where your teammate is and for him to know where you are instead of just chasing the puck when the other team has it all the time. The trick to this game is puck control, and you can’t score unless you have the puck.”

He also shifted one of his best players, Sylvester Flis, to playing defense to add speed—a move reminiscent of NHL legend Bobby Orr, who revolutionized the role of a defenseman through scoring and assists. In a similar manner, Middleton taught Flis to rush the puck on defense to create scoring opportunities.

“Sylvester went back on defense and ended up being the MVP of the tournament, scoring 11 goals in five games with three hat tricks,” Middleton said. “He also wore No. 4, like Orr.”

But heading into the 2002 Paralympics, Middleton had no barometer to gauge the potential of his team.

The one international tournament on the schedule with Canada and Japan was set to begin Sept. 13, but 9/11 happened and shut down all activity.

“After all the emotion of 9/11 hit everybody, we had to get back to thinking about the team,” Middleton said. “We scheduled another camp the first week of October, just a few weeks after 9/11. Every guy showed up to the camp from all over the country. Again, that showed the dedication and willingness to get this thing done and represent the country.”

At the Paralympics, the U.S. team was seeded sixth out of six. At one point, Middleton joked, a to-be-determined team was listed ahead of his squad.

Of course, competition doesn’t happen on paper, so when the teams hit the ice, it was a revolution of USA sled hockey.

They rolled through the preliminary round undefeated, upsetting all three medalists from the 1998 Nagano Games. They outscored their opponents 22-3 heading into the gold medal game, and they never trailed until facing defending champion Norway for gold. 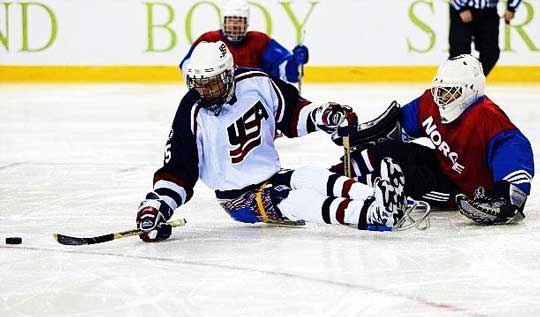 Norway scored first, but USA came back to take a 3-1 lead behind a pair of goals from team captain Joe Howard within 67 seconds. Norway responded to tie and send the match into an overtime period where neither team scored. A five-round shootout would decide the gold medal.

Howard, Chris Manns, and Kip St. Germain scored for the Americans during their rounds to give them a 3-2 advantage heading into the final round. Lonnie Hannah took his turn in the fifth round, but the puck was wide.

Norway’s last hope was Atle Haglund, but his shot was deflected by goalie Manny Guerra, and 8,000 chanting fans exploded as the team piled onto the ice in celebration, hugs, and waving flags.

The United States won the gold medal in sled hockey.

The payoff was more than a gold medal. The average age of the 2002 U.S. national sled hockey team was 34 years old, so most of the players had been grinding through the sport seeking success. And when it came, it poured out like a waterfall not just for them, but for the entire sport and country.

USA earned a bronze medal four years later in 2006, but has won the gold medal in sled hockey each of the last three Paralympic Games. The Americans have earned a medal in each of the world championships since then, too. Beyond that, it put sled hockey firmly on the United States map, as youth programs began to be established and a pipeline of younger players complemented programs for injured veterans returning from Iraq and Afghanistan.

Brandt hopes that sharing this story will be a step toward an inclusion transformation, where high school and youth hockey programs across the country will consider integrating sled hockey for training and education purposes. Use the sleds to train core strength, but also educate a younger population of all abilities about the sport of sled hockey.

Brandt is targeting the release of Tough Sledding: The Movie prior to the 2022 Paralympic Winter Games in Beijing to commemorate the 20th anniversary.

The fire was sparked by that 2002 rags-to-riches run.

“If it wasn’t true, it would be corny because they won the gold medal on a save on the last shot of a shootout,” Kaplan said. “But it’s true.”

“You can’t make this stuff up,” Middleton added. “Emotionally, it was the most exciting because we won and it was so unexpected. It was totally different from anything else I’ve done in my life in hockey.”