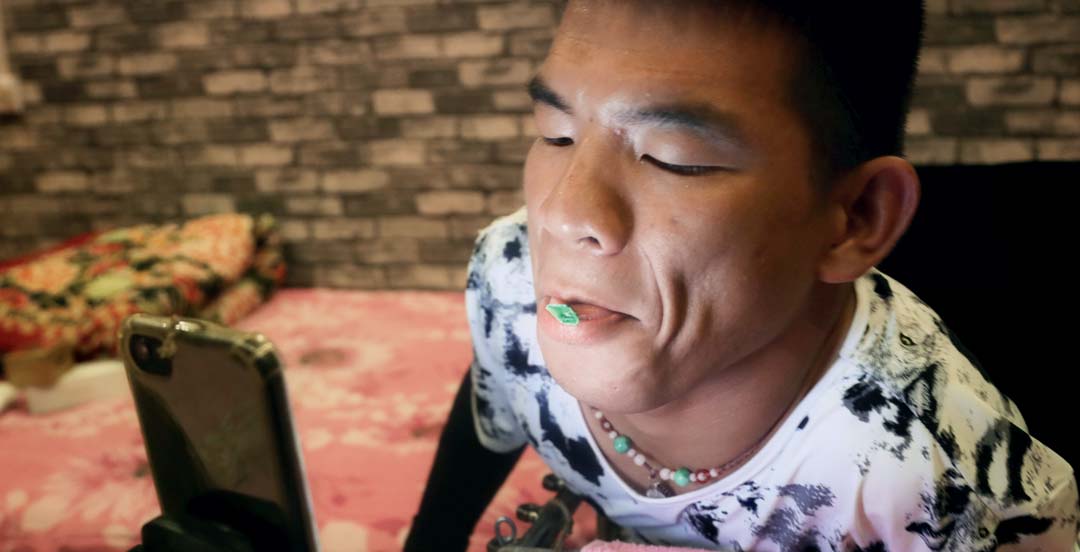 Gao Guangli, a 29-year-old native born with cerebral palsy in Tushanqiao Village of Jiaxiang County, Jining City, Shandong Province, set a Guinness world record in 2017 when he folded a paper boat with his mouth in 3 minutes and 34 seconds. Again in 2019, he snatched a national championship on Beyond Show, a Chinese popular TV talent competition.

Never before had Gao Guangli left his home village so often traveling far and wide as he has in these three months of his sudden fame. From Jiaxiang County, to Jinan, to Nanjing, and then to Tianjin, he has wobbled his way onto all kinds of stages to face different cameras and people. Over and over he put his incredible skill on display.

The Beyond Show Championship Cup claimed a serious and splendid presence on a long narrow table in the Gaos’ living room, looking quite out of place against the backdrop of a typical Chinese rural farm house. In the past few months, Guangli has experienced many firsts in his life – First time to take a high-speed train ride, first time to wear a suit, first time to enter a TV studio, first time to check-in at a star hotel, and first time even to feel like a star himself.

“Sooner or later all this hot attention will come to an end.” He is very much aware of pretentiousness under the spotlight, but that is where he draws real strength from himself. “I am truly happy and my confidence has leveled up.” For a young man who has been home-bound for 29 years, he wishes to go out to see the world and passionately get involved in it.

A talent with CP.

This is a new title Guangli has received after his appearance on Beyond Show on April 28.

“I’m very confident and I believe this is something you have never seen.” Guangli started with this strong, though brief, statement to the audience. Then, small candy wrappers were magically reconfigured into little models of airplanes and boats after turning and spinning at the tip of Guangli’s tongue. Such amazing talent stunned everyone and eventually led to the excited pushdown of passing lights that sent him to the next level.

It was not easy for him to perform on stage. Within minutes, from licking up a wrapper to folding it in the desired shapes, Guangli was covered in sweat, his temples bulging. But he turned down an offer to help him wipe off his sweat, saying, “It’s okay, I can do it.” He also refused a judge’s help when he was showing the folded paper pendants.

“I can do it” was most frequently said by Guangli while on stage, and now it has become a wide-spread adage.

In the July finals, Guangli captured the championship with his outstanding performance of making two paper cranes at once within 23 minutes, followed by needle threading with a knot at one end – all done with his tongue! This also best illustrated “the spirit of talent”: No one is too disabled to fulfil a dream.

He is delighted when people call him “Chinese Hawking.” “Hawking was one of a kind. So am I.” As to the other title, he does not mind them using “CP” with “talent.” “It’s okay, this is just a fact. I really hope that someone will break my record.”
CP has robbed him of all free mobility except in the mouth. Folding paper, controlling the wheelchair, live vlogging, and packaging are tasks to be done only with the mouth. Holding a chopstick in his mouth he can strike his computer keyboard ten thousand times and send four or five hundred messages in a single day, the amount of work that would look quite daunting to many normal people.

During my interview, a large country fair was running in his village. With great skill as usual, he maneuvered his home-made, mouth-controlled electric chair along a familiar trajectory through the crowds, snaking this way and that, going forward, turning, or skidding to a halt. When he had bought the fruit, the kind-hearted vendor took out a card with the payment QR code printed on it, drew closer, and offered to do it for him. With the chopstick held in between his teeth, Guangli shook his head vehemently, saying the expected: “Thank you, I can do it. I’ll do it myself.”

Guangli is much more intelligent than generally perceived with the label of CP.

A look at how he interacts with the world around him would reveal a fine young man high on both IQ and EQ. He uses two mobile phones, one for making calls and the other for live video broadcasting – Quite a lot to handle, but it’s neatly arranged. Once he drove his “car” straight to the market and bought a kilo of peaches to address an awkward situation where he found nothing at home to treat county officials who had visited him and his family. Upon learning that I am from Hunan, he especially asked his mother to get some chili for the meal.

His mother, Wang Guizhen, always knew that her son was intelligent. As a school-aged boy, Guangli had to remain home-bound and intently watch his friends do their homework when they came from school. That’s how young Guangli learned Chinese phonetics. But the mother did not notice when her son acquired the “tongue paper-folding skill.”

In 2002, 12-year-old Guangli was envious of his friends folding paper planes and boats, but his shaking hands wouldn’t do his bidding. If things can’t work out with the hands, what about the tongue and teeth? After repeated and difficult attempts to coordinate his tongue and teeth, finally came one day when he produced his first paper plane in good shape.

He showed his success to Grandma right away. Pleasantly surprised, the old lady presented it to the neighbors in excitement. That day, Guangli suddenly felt hope for the future because he had “now become a worthy person.”

Folding paper with the tongue is almost too much of a stretch for human physical capability. Guangli had tried to use several kinds of material, including sausage and chewing gum wrappers. Gradually he found that candy wrappers were a workable choice. But it has several disadvantages. For one, candy wrappers lose the colors easily when wet. For another, they have sharp edges that badly hurt the tongue. Worse, direct contact with virus-contaminated wrappers can easily cause oral ulcers. On top of all these are countless accidental swallows that makes him feel “full” and even violent stomachaches. Once he came down with appendicitis when he was 16. 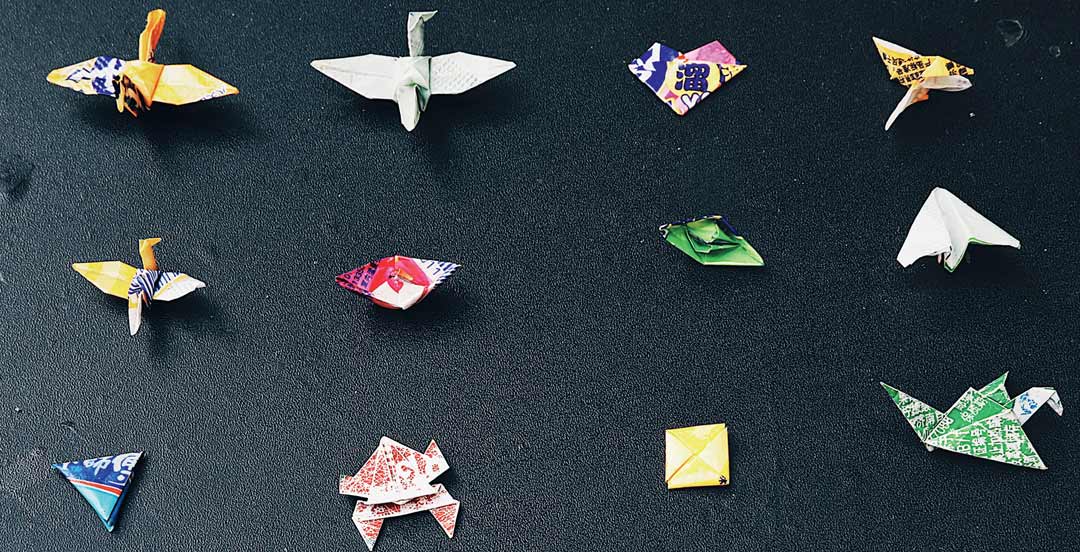 Finally, the tongue that had been scraped and scuffed over and over could cooperate with the teeth. “Mostly it’s about the sensation of the tongue and the pressure of the teeth. The tongue turns it over, and the teeth punch out a crease. The tongue feels it, tucks a corner, unfold like what they do with their hands, and there you have it.”

More amazingly still, Guangli can easily control the secretion of saliva so that his works, when finished, feel almost dry. In 2017, with the help of a friend, he made a video of the process and uploaded it to a US website to apply for a Guinness World Record. Then he set the record by successfully bringing a paper boat to shape with his mouth in 3 minutes and 34 seconds.

In addition to paper planes and boats, Guangli also taught himself how to make twelve other paper things, including frogs, cranes, ingots, and swallows. The most complicated is the paper crane because it requires many creases. One paper crane takes him 20 minutes to finish.

However, this is Guangli’s favorite. Last year, he met a kind-hearted girl from Lanzhou and fell for her as she showed her great care despite knowing his conditions. Her name has a word meaning “crane” in Chinese. To express his feelings, Guangli spent three months folding 99 paper cranes and then carefully assembled them in a glass casing in a way that resembled the Chinese character of “crane.”

Going out into the world for the first time

got cerebral palsy due to his premature birth in September 1990. But he says he’s lucky because his older twin brother did not make it. ...
Login to read the full article. SIGN UP HERE FOR YOUR FREE MEMBERSHIP
If you are already a member, welcome back! LOGIN HERE

Indeed so, as his WeChat motto goes: Fight for dreams.

Article and photo by Feng Huan 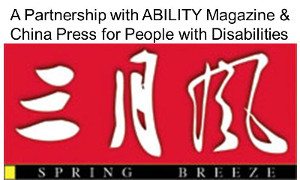 ‘Donna on the Go’ by Donna Russo and Peggy Lane

Wendy Lu — From Graduate to Advocate

Humor Therapy — Calling Them Out

Kate Linder more than the Young and the Restless

Camerone Parker — A New Fashion Statement: Never Give Up!

Ouch — Pain in the Back