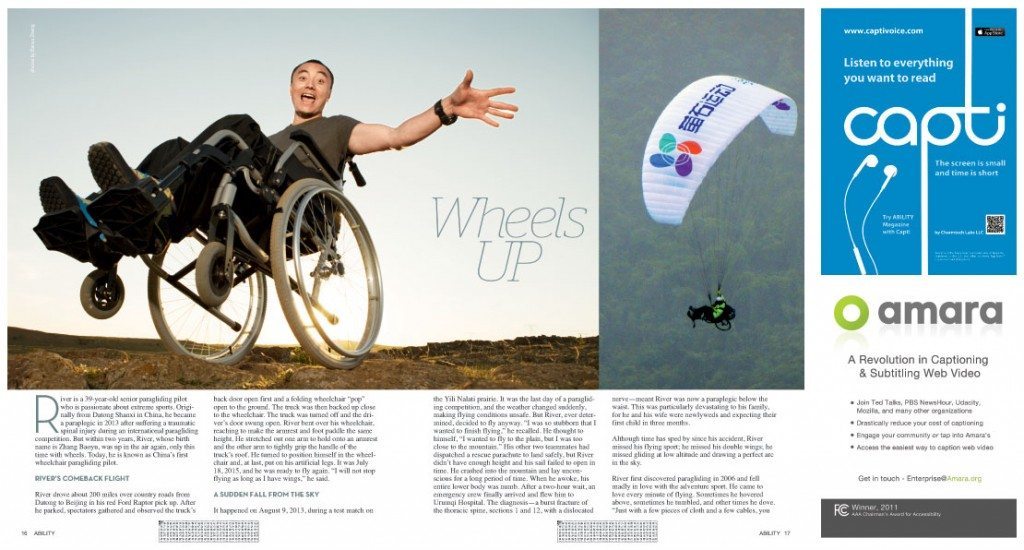 River is a 39-year-old senior paragliding pilot who is passionate about extreme sports. Originally from Datong Shanxi in China, he became a paraplegic in 2013 after suffering a traumatic spinal injury during an international paragliding competition. But within two years, River, whose birth name is Zhang Baoyu, was up in the air again, only this time with wheels. Today, he is known as China’s first wheelchair paragliding pilot.

River drove about 200 miles over country roads from Datong to Beijing in his red Ford Raptor pick up. After he parked, spectators gathered and observed the truck’s back door open first and a folding wheelchair “pop” open to the ground. The truck was then backed up close to the wheelchair. The truck was turned off and the driver’s door swung open. River bent over his wheelchair, reaching to make the armrest and foot paddle the same height. He stretched out one arm to hold onto an armrest and the other arm to tightly grip the handle of the truck’s roof. He turned to position himself in the wheelchair and, at last, put on his artificial legs. It was July 18, 2015, and he was ready to fly again. “I will not stop flying as long as I have wings,” he said.

A SUDDEN FALL FROM THE SKY

It happened on August 9, 2013, during a test match on the Yili Nalati prairie. It was the last day of a paragliding competition, and the weather changed suddenly, making flying conditions unsafe. But River, ever determined, decided to fly anyway. “I was so stubborn that I wanted to finish flying,” he recalled. He thought to himself, “I wanted to fly to the plain, but I was too close to the mountain.” His other two teammates had dispatched a rescue parachute to land safely, but River didn’t have enough height and his sail failed to open in time. He crashed into the mountain and lay unconscious for a long period of time. When he awoke, his entire lower body was numb. After a two-hour wait, an emergency crew finally arrived and flew him to Urumqi Hospital. The diagnosis—a burst fracture of the thoracic spine, sections 1 and 12, with a dislocated nerve—meant River was now a paraplegic below the waist. This was particularly devastating to his family, for he and his wife were newlyweds and expecting their first child in three months.

Although time has sped by since his accident, River missed his flying sport; he missed his double wings; he missed gliding at low altitude and drawing a perfect arc in the sky.

River first discovered paragliding in 2006 and fell madly in love with the adventure sport. He came to love every minute of flying. Sometimes he hovered above, sometimes he tumbled, and other times he dove. “Just with a few pieces of cloth and a few cables, you can fly like a bird” he exclaimed. “It’s a fantastic feeling!” Flying brought so much joy to River that any concerns for safety outweighed the risks. Although his life was irrevocably changed, River remained light-hearted and joked about his condition, often calling himself an injured raptor.

River lay in the hospital for nearly 40 days. Once discharged, he was deep in debt. To pay for his surgery, he sold his car and all his sporting equipment. Despite his physical pain, he felt an even greater pressure to face the reality of taking care of his family and himself. He simply had to learn how to manage. With his strong sense of determination, he quickly learned how to take care of himself and to use a wheelchair to do whatever he needed to do—be it using the toilet or learning to drive again.

To make a living, he started an on-line business selling antiques. He also opened a photography shop and worked long days. His best part of the day, however, was always watching his young daughter play on his lap. ...
Login to read the full article. SIGN UP HERE FOR YOUR FREE MEMBERSHIP
If you are already a member, welcome back! LOGIN HERE