Statistics show more than 17.3 million blind people in China, meaning that one out of 100, cannot see or even know what they themselves look like whether they smile, are in tears or totter this way and that. But it doesn’t prevent them from embracing beauty as they come to understand it. Among them are three ladies from Chongqing named Lai Pan, Zhu Yanmei, and Hu Qili, who went out for an exclusive photo shoot. Although they could not see the final product, it nevertheless cast their most beautiful reflections in their hearts.

If you couldn’t see, would you still go and take studio photos of yourself?

Here is an answer from the three blind ladies: We are not here to see, but to be seen.

In a world without of light and color, these young women in Chongqing opted to shoot “un-seeable” photo albums.

In her album, Lai Pan, a music teacher in Chongqing Special School, turns into a fairy in wonderland. Her colleague Zhu Yanmei is wearing a white wedding gown, innocent and pristine. Hu Qili, who works in a blind massage shop, radiates with joy and energy.

Three albums came with different styles, all reflecting and presenting the subjects’ understanding of beauty. This is the kind of beauty that, though unapproachable with their own eyes, can reach their souls.

Lai Pan: Tender and delicate on the outside; sensitive and resilient within

“It’s difficult to do eye makeup for me, isn’t it? One eye is smaller than the other. Is it possible to make them look the same?” In front of the makeup mirror, Pan asked with caution, her right pupil rolling inside the socket from time to time.

“We can’t control our pupils. They always roll around involuntarily. If my eyes move during the photo shoot, remind me, please!” Pan went on with her cautious inquiries during the make-up.

Lai Pan, 24, was born blind in her left eye and with only partial light sensation in her right eye. When she looks at things, she has to tilt her head. For a more accurate perception of objects in front of her, she usually maintains five or six centimeters between her eyes and the object she is trying to see.

When she was younger, Pan’s mother always reminded her not to hunch over. Whenever the daughter did, the mother would knuckle her on the back until one day her girl, who had been “fed up” with it, muttered to her: “I just want to see the ground more clearly. If I don’t see my way ahead, I feel very insecure.” Only then did it dawn on the mother, with a pang of sadness, that her daughter was not as strong as she had thought.

Pan began to study away from her hometown in Sichuan at a young age. Soon she was accustomed to traveling by bus and train alone. “To see” did not seem as important to her at this point, though it was still her extravagant wish to do so.

The first time she really felt different from an able-bodied person was when she started school. At first, Pan was sent to a normal school, where she was a special existence among her classmates because she could not see the blackboard or Chinese characters on the textbook. Although she could most fluently recite every text and solve math problems most quickly and accurately in class, her heart still quivered a little when she heard the teacher’s sorry sighs.

Later Pan was transferred to a special school, and her “specialness” was no longer awkwardly prominent. In that blurred world, she became more inclined to express herself through music. Folk, popular, bel canto, no matter what the genre, her natural talent made it easier for her to feel contentment in the world of music.

Since she left mainstream education at a young age, Pan was never able to learn Chinese characters, and that is still a regret for her. “But there are still a million other things in this world I want to know and love. So I can instantly get rid of unrealistic thoughts from my mind. “

Never for once did Pan reject photography. Prior to the photo shoot, sometimes she snapped pictures of flowers and plants and occasionally asked others to take pictures of herself. “Many blind people are afraid to get along with people who can see. They pretend to be lofty and uninterested, but deep down they are vulnerable and need the care and understanding of people who can see.”

“But there are exceptions,” Pan paused. “There are also blind people who are cheerful, animated, talkative, and knowledgeable, and who are admired and appreciated by all, blind or not. But I am still far from being that. “

Zhu Yanmei: Rador is my knight and my daughter an angel.

In the fitting room Zhu Yanmei changes into a long gauzy white dress and says, “I have gained weight.” It’s only been three months since she gave birth to a child, and now she’s counting the days when she will lose weight. Though unable to see, she hopes to look “better.”

This is not Yanmei’s first photo shoot. She took a campus photo-op while in college and wedding photos when she got married. “The three of us were shooting separately. The photographer asked us what type of photography we’d like, romantic or athletic. I always like something pure and romantic.” 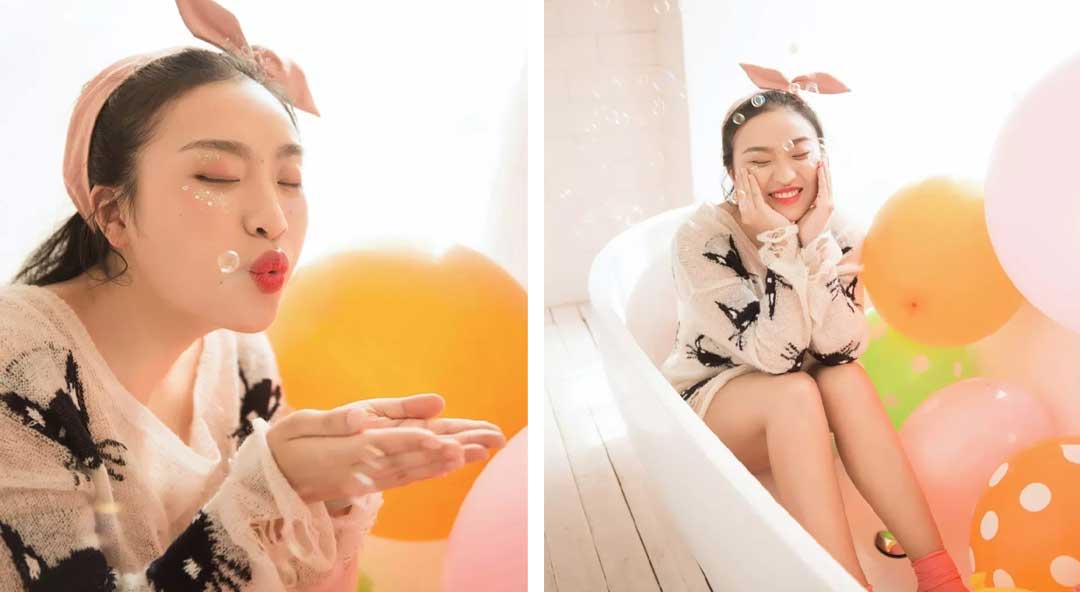 Yanmei, 34, is Lai Pan’s colleague teaching vocal music in the same school for the blind. At puberty, children like clothes with many accessories and pendants. A garment would sure look nice with yarn, beads, laces and flounces artistically attached to it; and the ladies can tell the difference by touching. For them, T-shirts would be the last option.

“I hope people can see me as pretty. It has nothing to do with whether I can see or not.” Yanmei can imagine how she looks and dresses up. She was born with a sense of light in her eyes and she was able to see her face until she reached 13. By that time her eye disease had worsened to a point where the optic nerve was oppressed. Her world gradually blurred. “Slowly my eyes lost focus, and finally there was nothing.” As such, she bid farewell to the last ray of light in her life.

Yanmei studied piano all the way to Grade 8 just by memory. Then, she took the national college entrance examination for people with disabilities and, with the highest professional scores in all of China, was admitted to the College of Special Education of Changchun University, majoring in musical performance. Truly a whiz kid she was!

Now in Yanmei’s family lives Rador, the only guide dog in service in Chongqing. From application to adoption, Yanmei waited for 4 years. Before she could take him home, she needed to go through one month of training with Rador at a Dalian-based guide dog training center. The first time she was introduced to Rador, he rubbed her affectionately. “That feeling cannot be described in words.”

In the past two years, Yanmei no longer troubled someone to send her to work. It’s Rador that chaperons her to and from the school. “Rador protects me with his life. He is not only my eyes but also my family.” In Yanmei’s heart, Rador is her knight and her daughter, a little angel.

Talking about her daughter, Yanmei looks swelled with happiness. “She listened to Mozart when I had her inside me and to happy nursery rhymes when out.” Unfortunately, Yanmei was not be able to milk her directly from her breast. Instead, she needed to use a milk pump and ask her mother to bottle-feed the baby.

Yanmei cannot really see her daughter. “They said my daughter had a chin like mine and the rest like her dad’s. I ran my fingers over her. Her face was round and her hair was fluffy – like that of a little rabbit. Her nose was small and quite tall. Her eyes were small and so were her lips – I think they should be red. “

“I’ll choose the style and the photographer tells me what color my dress is, what makeup and hairstyle it matches. Then we will discuss and make final decisions.”

According to Hu Qili, this is beyond ordinary photographers. “Those who don’t understand what I really mean will make me look really bad in pictures.”

In fact, deep down she very much enjoys taking photos of herself. But an “unfortunate event” she encountered when she was a child affected her more or less in a negative way.

On one birthday, her aunt took her to be photographed at a studio. Despite the young girl’s desperate explanations, the photographer still kept demanding: “Why don’t you look at the camera?” “Look up, to the left!” “It’s obvious that you are rolling your eyes!”

“In fact, most of the time we don’t need instructions; we need understanding,” Qili said. 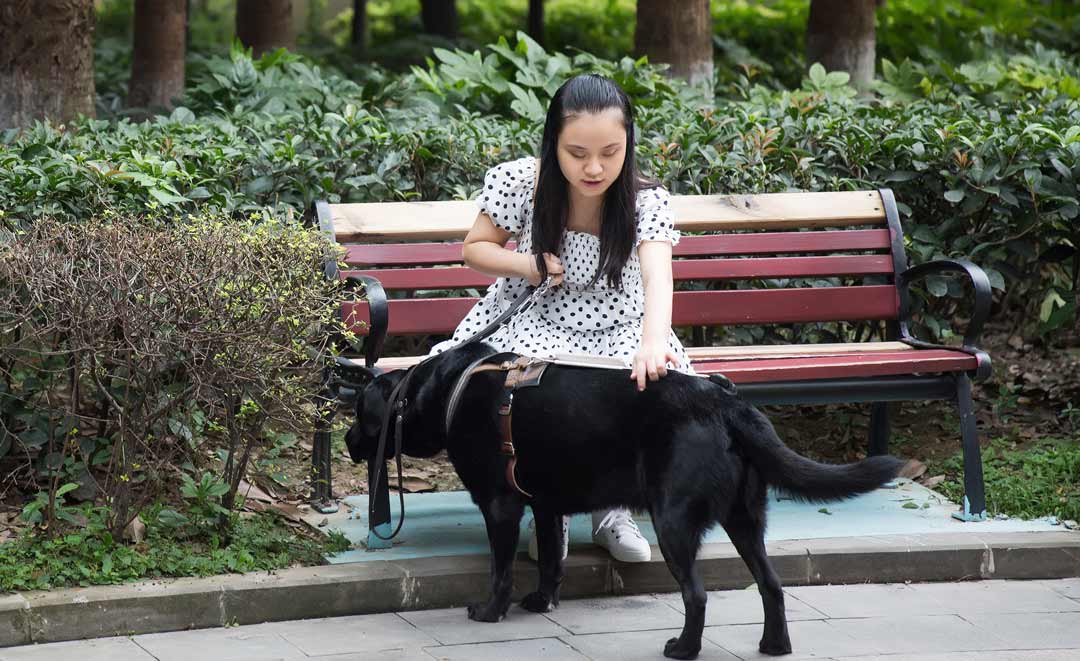 Qili’s parents like to call her Tian Tian, meaning sweeties in Chinese. Although she was born blind, she created her own version of colors and lines in her heart. She liked to “watch” the Slam Dunk and do handiwork. She once made a little toy — a grass nibbling rabbit. It was a pink bunny, but she put a handful of grass on its face and beneath its nose. Maybe that was how she came to understand the way rabbits eat.

Ashley Fiolek — Babes in the Dirt 5

Paul Basagoitia — Red Bull’s Film “Any One of Us”