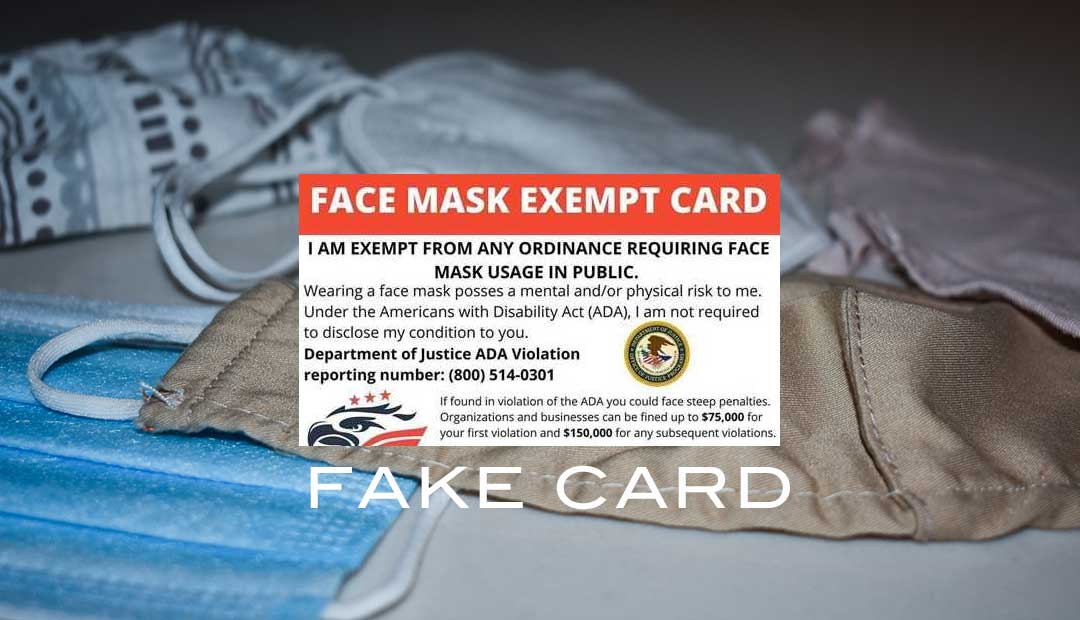 Face coverings seem to have become a staple in today’s world. Celebrities can be seen sporting Gucci coverings, while others have turned their sewing skills into small businesses. Posts have gone viral showing their effects in reducing viral spread. However, despite how simple these cloth coverings may seem, there is controversy erupting regarding the legal validity of face mask requirements.

Several states and businesses have mandated the use of face masks as they serve to protect wearers and those around them. However, some people feel that it’s their right to choose if they would rather accept the risk of catching COVID-19 than wear a face cover. In response, fraudulent cards are appearing, claiming the holder of the card cannot wear any face coverings for health reasons and are protected under the ADA.

The card states that for either mental or physical health reasons, the cardholder cannot wear a face mask. It threatens to fine a business at least $75,000 if organizations or businesses do not comply. The card lists the Freedom to Breathe Agency as the issuer of the card, although no such government organization exists. Additionally, it claims that the ADA states the cardholder is not required to disclose information on their disability.

The backlash against required face masks isn’t the first time a mandate issued in the interest of public safety has caused controversy. For instance, the 1960’s saw debate over seat-belts and issues over making the use of motorcycle helmets mandatory. Each of these issues stems from the idea that the government is violating citizens’ rights by not allowing them to choose what safety measures they employ at their own risk. And while it’s surprising something as simple as a face mask has become a partisan issue, it’s more shocking people are lying about disabilities in order to rebel.

The ADA is intended to promote equity for people with disabilities. For those with actual disabilities that inhibit them from wearing a face mask, such as PTSD or respiratory issues, it’s not as simple as showing a card. While it’s true that the individual does not have to disclose their exact condition, they can be asked to show documentation that their condition meets the ADA’s definition of disability. Then, they may be asked to find an alternative solution that meets both their and the business’s needs. For example, an individual may have someone shop for them or they may wear a different type of face screening.

For now, the CDC still recommends the use of masks, and many states and businesses are issuing mandates. So, whether it’s Gucci or home made, it’s best to be safe for yourself and others, or you will face the consequences.

See more international guidelines here. For information and technical assistance about the ADA or fraudulent cards being used to avoid face masks, please contact the ADA Information Line at 800-514-0301 (voice) and 800-514-0383 (TTY).

At the time of this post, penalties for using this false documentation are unknown. Several states impose penalties for other false disability related issues such as falsely trying to present a pet as a service animal.

In Texas, falsely outfitting your dog as a service animal is a misdemeanor, punishable by a fine of up to $300 and 30 hours of community service. In California, it is a misdemeanor to falsely and knowingly claim that you are the owner or trainer of a service animal. The crime is punishable by up to six months in jail and/or a fine of up to $1,000. In New Jersey, you can be fined from $100 to $500 for putting your dog in a guide dog harness to falsely pass it off as a guide dog.