Hurricanes, Fires and Earthquakes. Oh My 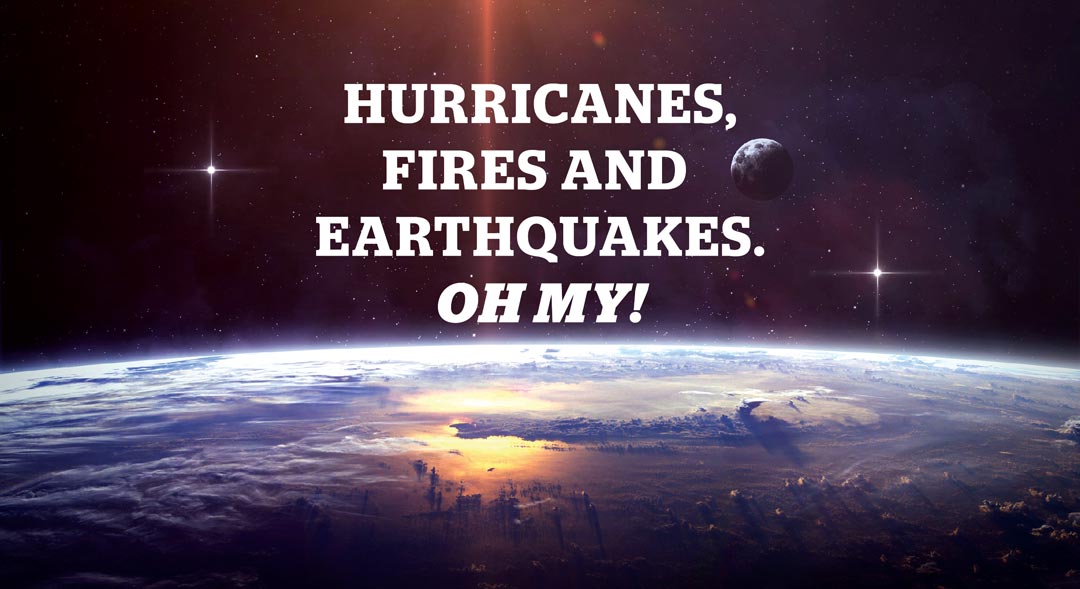 Lately, it seems as though hurricanes, fires and earthquakes are happening simultaneously around the world. It’s as if Mother Nature has a serious bone to pick with us, and has unleashed her fury.

Some say it’s the Lord’s way of punishing us for doing wrong or, as one well-known celebrity put it, “God sends hurricanes to make sinners repent.”

I, on the other hand, don’t believe that Mother Nature or God have tempers. Anger is a human emotion triggered by perceived injustice. Visited upon others, rage can be toxic, cruel, selfish, and lead to fatal results. Because natural disasters seem to mimic the out-of-control feelings that fuel anger, we try to find someone to blame when Harvey floods our houses, Irma tears the roof off of an island nation, or tens of thousands of beautiful acreage vanish in flames.

Mother Nature is not trying to tear us down; she’s quietly hoping that we hurry up and get our act together, so the planet survives and keeps spinning amongst the others in the universe, so we don’t end up like one of those death stars that burns itself out.

From the time our planet came into existence, Mother Nature has patiently rejuvenated herself against whatever chaos we throw at her. We could go back to the Biblical flooding, but let’s not. Instead, let’s take a look at what we, as humans, do in the current era to bring these natural disasters upon ourselves, and join with the millions of people who are consciously paying attention to the ways in which we can assist our dear Mamacita.

Mother Nature does not care one iota about politics, religion, race, or sexual orientation, she hangs out amid the rainforests, the oceans, the ozone layer, and the polar bears, trying again and again to work her magic so we can remain healthy and thrive.

The wastes that we humans have created for centuries have wreaked havoc upon Her land, water and animals. She’s only trying to survive the toxicity we visit upon her. Instead of getting all worked up over a perceived blame game, the people of the world can accept that we’re all in this together, and stop doing things that undermine Mother Nature’s efforts. For instance, discarding so many plastic bottles for her to absorb; dumping bio-chemical poisons in her waters; fracking (and cracking) the earth, while aiming nuclear missiles at one another across the miles.

Truth of the matter is that every little bit that each of us can do towards making our planet healthier, lessens the drastic measures Mother Earth must use to right the imbalance we, ourselves, have created. What you can do about it: Sign petitions to stop fracking; give to the preservation of the rainforests; plant trees and flowers; and remember to recycle; these are the ways we can show our respect for Mother Earth and demonstrate our worthiness for her continuing hospitality.

Yes, I believe we can all live in global harmony, but we must rid ourselves of layers of destructive patterns. Our sacred planet suffers from the same cancers we find in our own bodies. In order to heal ourselves, we must love one another and the planet unconditionally, and treat this Earth as if we intend for future generations to live here. Because if Mama’s not happy, nobody’s happy.