NO Car for Me 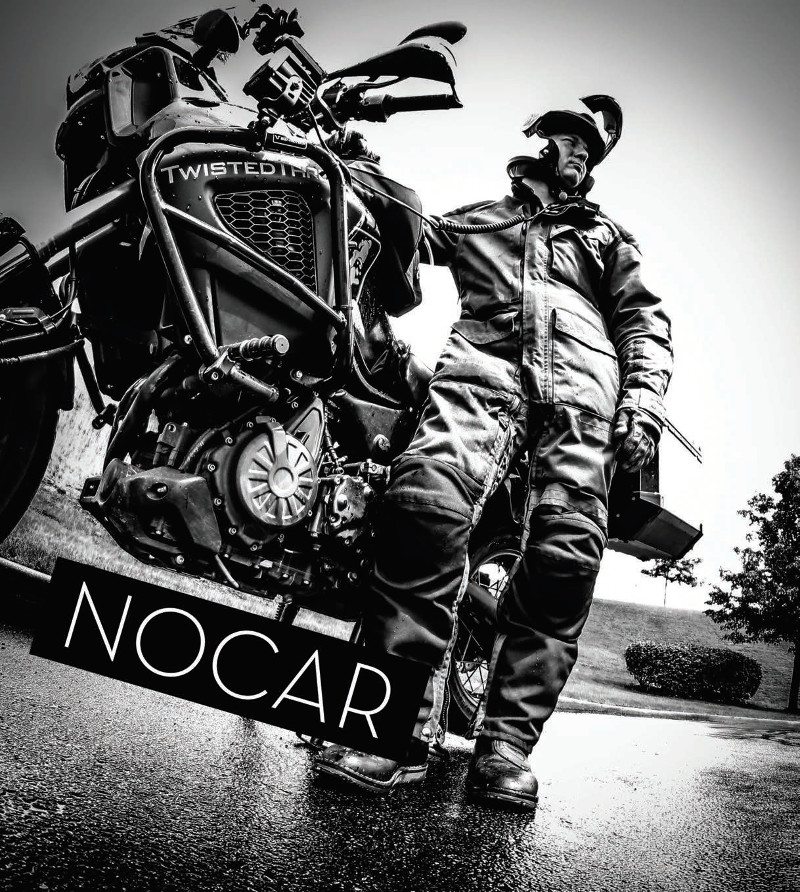 I am often asked, why? Why do I ride in the pouring rain? Why do I ride in the black of night? Why do I ride in the bitter cold of winter? My motorcycle license plate reads NOCAR, and here is why I ride my motorcycle every day. Forty years ago, I had the opportunity to have my palm read by one of the most famous fortunetellers in the world—at the midway of a county fair. After paying with three ride tickets, he hooked me by miraculously knowing that someone in my life was named Mom. For an additional three ride tickets, he was able to inform me that my future might involve living happily ever after or end in a fiery automobile crash. I opted for the happily ever after, and I have tried to stay away from cars ever since.

Riding a motorcycle makes me feel alive and refreshes my spirit. After almost 30 years on two wheels, it still never gets old. We all need an activity in our busy lives that will do this for us. Skiing, running, surfing, painting sunsets or even knitting might do it for you. The trick is to find something you can be passionate about and make it an important regular activity in your life. You deserve it!

When I ride, I do not have multiple sclerosis (MS). Even the thought of my disease melts away almost instantly along with my symptoms and all the rest of my life’s junk, freeing me, leaving me carefree and in the wind.

Take today, a dreary cold January morning for instance. I’d bet a million dollars I felt more alive and refreshed when I arrived to work today than all the other commuters in my state combined. With no hint of bad weather or road conditions from the TV, I grabbed my boots, heated jacket and gloves. With a kiss from my understanding wife and a smile under my helmet, I rode off. I have a handful of routes to work I can pick from, but today I took 40 miles of scenic hills and curves.

About 30 miles into my ride, I began to notice the roadway was no longer salt crusted or dry. The heavily treed state park road I was travelling on hadn’t dried out from yesterday’s rain shower like the rest. The asphalt was glistening, and the dry tracks where tires helped expose the pavement slowly got thinner and thinner until there were none. It would not have been any issue at all, if the temperature hadn’t been 21 degrees. I was riding myself into the midst of another surprise adventure.

I concentrated on smooth moves, managing throttle and brakes with an ever so gentle touch. I tried not to lean the bike at all. I did not tense up or panic, but I was curious how the situation would pan out.

Road traffic had started to materialize, which was a big red flag, as I seldom encountered any cars on this road. We all slowed down to about 10 mph, just about the time flashing headlights were signaling from the opposite direction. The cars ahead of us were stopped, and some up ahead were actually turning around.

Cars had slid off the road ahead, and emergency lights from a tow truck and police car were visible through the leafless trees. As I came to a slow and calculated stop on the incline of a hill, I touched my tippy-toes down on each side of the bike, immediately confirming that it was indeed sheer ice I had been balancing on for the last few miles. I held my breath, trusting the brakes and my faithful Bridgestone tires would keep me from sliding about in impossible directions. I wasn’t worried or scared, just not sure what I could do in this predicament. It was a narrow country road with a high crown and no shoulder. The cars ahead were slowly making four or five point U-turns. There was no way I could reverse direction without surely dropping my 700 pound bike repeatedly on the ice. I could read, “Are you an Idiot?” on every set of lips shielded by safety glass as the cars ahead retreated.

In a brief rare moment, the smile left my face and I wished I’d owned a bike with a seat height that wasn’t three inches taller than my leg length, so I could have at least dragged my feet like pontoons. (Notice, I didn’t go so far as to wish I’d borrowed my wife’s car this morning.) I waited a few minutes on the edge of the road, and a few cars behind me did the same. A tow truck was pulling a car out of the brush and blocking the way ahead. We could not go forward, and I was not going to attempt to go back. Although I would be very late to work, I knew in a few hours the temperature would rise enough to melt the thin black ice. A man in a white Ford truck rolled down his window as he passed and gave me two big thumbs up. Obviously, he was a rider, albeit a smarter rider.

It was just a few minutes, but the solution to this morning’s adventurous dilemma appeared like an Apache helicopter loudly rising over the horizon. A 10-wheel DOT sanding truck approached from the other direction. It was a joy to be saved, baptized if you will, with a wonderful splatter of rock salt, sand and brine. As my rescuer passed me, he rolled down his window and yelled down to me, “Be careful buddy, it’s all ice ahead!” Traffic began to move forward after the second car was towed away. My GPS confirmed it was only about a mile until the safety of the dry and treated main road, so I turned off the bike’s traction control which allowed me to move on the ice, held my breath and continued slowly over the hill and around the bend.

There were no reporters, congratulatory crowds, cheers or clapping when I reached my office parking lot and dismounted my trusty steed this morning, but it did take me over an hour to stop giggling, and I am still unable to wipe the smirk off my face.

Not every day’s commute is like this, but mornings like this make me feel excited to be alive and truly grateful I get to experience such an invigorating, life-lifting, skillmastering achievement, just trying to get to work! No matter what else I do today, I can already declare this a most excellent and successful day.

Why on earth would I ever want to commute by car?