Seizure Dog — She Nose When 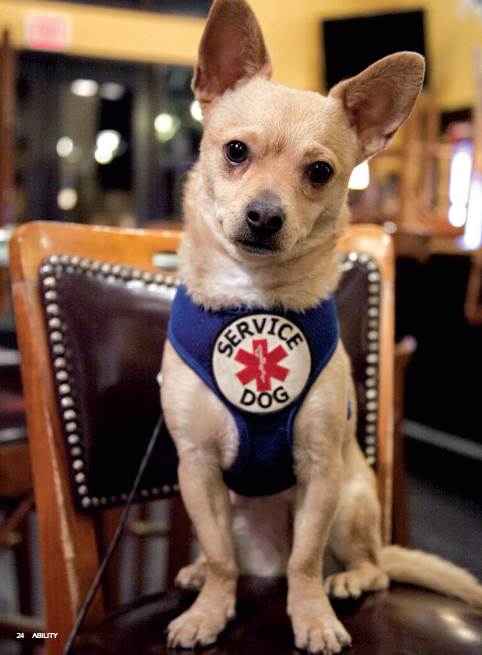 Most dogs bark, but Rosie, a melt-yourheart, dark-eyed Basenji, does something different: she yodels. Not for food or to alert her master of potential intruders, but to call attention to a burgeoning medical emergency.

Rosie knows a unique trick: She knows how to sense an imminent seizure in her owner, Charlie, a former firefighter/paramedic.

“It could be a change in my eyebrows, I guess,” he says of those moments when his pooch notices a shift that signals an oncoming seizure and lets out a little yodel to help Charlie stay conscious long enough to take his seizure-blocking medication—a mixture of Versed and Valium. Then the crisis is quickly averted.

The furrow in his brow reflects a bit of pressure in Charlie’s head that he says is hard to describe: “It almost feels like my vision is being pushed in and narrowed.” But just as Charlie is registering the storm clouds gathering in his head, Rosie is registering that her owner is nearing the danger zone and sounds off.

A research study brought Rosie and Charlie together three years ago, after the paramedic first responder was injured on the job in a gas fire explosion, where he sustained a traumatic brain injury.

“I was sent out to a home fire where someone had decided to live off the grid,” he explains. “They had their whole house set up on a generator. They’d re-wired a propane tank to make their house run off of it, but they wanted to run their dryer, which wouldn’t run off the generator. So they took a 60-gallon propane tank and plugged it into this dryer. The problem was that they didn’t use a natural-gas-to-liquid-propane converter, and didn’t have the right air mixture valve attached.”

The garage filled with propane gas and as Charlie approached it, a colleague who was a rookie firefighter, cut a hole in the side of the garage. “Just as I walked up to tell him not to do that, the garage blew up, he and I along with it.”

Both were hospitalized. The other firefighter sustained more serious injuries, while Charlie lay in a coma for more than two weeks. He awoke to learn that he is deaf in one ear and almost lost both eyes.

Fortunately, Charlie is a natural born lip reader, having grown up with a sister who is deaf. His newly acquired seizure disorder made him eligible for the seizure-dog study, which paired him with Rosie. Since then, the two have become inseparable.

When Charlie returned to work after his accident, his caramel-colored pooch went, too, and became part of the crew, a canine-riding mascot on the fire engine. Rosie is strikingly obedient with her short, sleek coat and sharp, pointy ears. She doesn’t like surprises, so she and Charlie have an implicit understanding: he pretty much explains everything to her before it happens, collaboration based on mutual trust.

Charlie is one of 12 participants in a discreet seizure-dog study who sustained a concussion or an explosion-caused traumatic brain injury in the line of duty, either from their service in a police or fire department, or within the military. The initial purpose of the study was to determine the efficacy of such dogs, particularly the Basenji breed, which are “bark-less,” because their unusually shaped larynx produces a yodel sound.

But as so often happens with scientific studies, the research yielded an unexpected discovery: participants began to experience a longer duration between seizures.

“Researchers weren’t ready for the fact that the seizures would decrease if participants were alerted prior to them happening,” says Charlie. “They were just trying to figure out a way to stop seizures before they happened and then they started noticing that once they were being prevented, people were experiencing longer periods between them. They believe it’s because, seizures actually produce brain trauma.”

Rosie’s interventions have afforded her master a new found sense of independence. Although Charlie no longer serves as a paramedic/firefighter—an on-the-job seizure lead to him to take an early retirement—he managed to have his driver’s license reinstated.

“After nine months of not having a seizure, I was able to get a doctor’s note confirming that I hadn’t had one and they gave me back my license,” he says proudly. Now that he’s back in the driver’s seat, guess who’s wagging her curly tail to be his road dog?