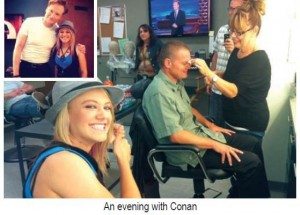 This year I have learned to expect the unexpected with my career. I was asked to be a part of two amazing adventures that I never could have imagined as a professional motocross racer.

First, my mom received an email from the casting director of Switched at Birth, who asked if I could stop by their office to do a reading for the show. I was very excited about the opportunity. So, on my next visit to California, I met with the casting directors and writers. I did the reading and had a ton of fun. Although they said I did a good job, the show’s producers indicated that they were already more than halfway through the show’s season, so sadly there wasn’t space for my part.

I was contacted again in May and asked if I was still interested in being on the show. I told them I was and received a script in the mail and a couple of weeks later, I went back to film my part for the show. My mom came with me for support, because I knew I would feel a little out of place. There would be no dirt, no gear, no bikes!

When we entered the studio, I saw a trailer that actually had my character’s name on the door. That’s when I started to get really nervous. What if I forgot all of my lines? What if I tripped when I walked out on the set? Man, this was worse than my nerves at the start of a race.

I introduced myself to some of the actors and interpreters that worked on the set and everyone was so nice, so I started to relax a little. After my mom and I sat in the trailer and practiced my lines over and over, the writer and producer came to see me. They announced that there were problems on the set, and they didn’t think they were going to be able to get to my part. I was really bummed. I had been looking forward to this day for so long. My acting “debut” was again put on hold. 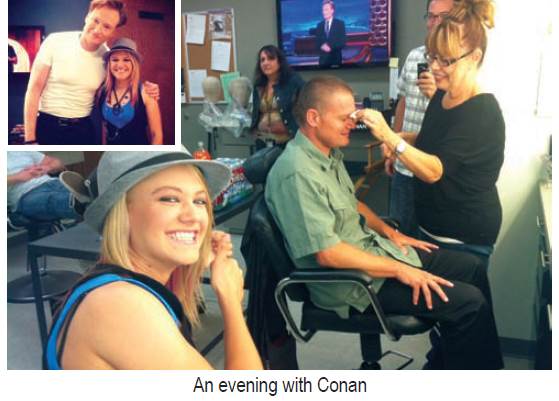 Meanwhile, my racing season started up and things were going well. I was also getting ready for the X Games. Then, someone from ESPN contacted me and said the night-time talk show CONAN wanted me to appear with my dad to talk about my racing career and my participation at the upcoming X Games. The CONAN show had never had a deaf person on before and wanted me to be the first. I was so stoked—another first for this motocross racer. So, my dad and I went shopping for clothes for my TV debut, and then we headed to LA for the taping.

We were briefed on what was going to happen during the talk show. I was pretty nervous, but I think my dad was even more nervous, which helped calm me down. Conan came back into the green room before the show started to introduce himself and chat with us. He was so nice and put me right at ease. He is so tall in person – taller than I had expected even though I had been warned. The show was a great experience, and my dad and I had so much fun.

Back at home, my mom was contacted by the Switched at Birth team again. The show was back on. I couldn’t believe they called again. Before I knew it, we were back at the studio where I met “Daphne” and “Bay.” We chatted and practiced our lines together before we went on set. It seemed so surreal to finally be filmed as part of the show and be a part of the team.

Tune in to ABC in September to see me in action in my first ever TV role. Actress and racer — I could get used to this.