What if the only thing getting in the way of you, was quite frankly, a piece of you? Dig deep into how far you would go in making sure that nothing gets in the way. In your way of moving closer to how you envision your life.

While most of us were pondering the inevitable announcement of the demise of Destiny’s Child, at the tender age of 16, Jack Eyers was making a life altering decision. Although he was quite aware of the extremity of the situation, the decision to have his right leg amputated was something he was ready to take on. Feeling exhilarated and more driven than ever, he’s been traveling, modeling and motivating individuals as a fitness trainer. 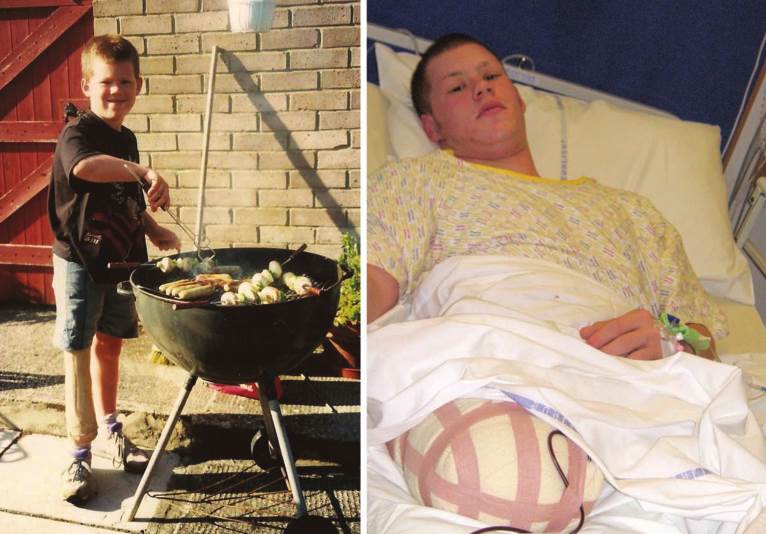 ABILITY caught up with Jack between sets.

Lia Martirosyan: How did you get into modeling?

Jack Eyers: I met Angel Sinclair about a year ago now. She invited me along to a trial photo shoot. I didn’t know what to make of it. She tried me in all sorts of different poses and not having any friends in the industry, I didn’t really know what was going on. I didn’t know what to make of the situation. But the images she showed me at the end, I was quite surprised by. I’ve always been into art, design, things like that and I really liked those images and the fact that I was in them (laughs). And it showed my leg off.

Martirosyan: What were you doing before that?

Eyers: Personal training, fitness. Which I still do.

Martirosyan: Can you tell me a little bit about what happened?

Eyers: With my leg? Sure. I was born with a condition—it basically didn’t grow properly. It’s called PFFB (proximal femoral focal deficiency). It’s a deficiency in the femur, the big bone at the top. There’s a whole number of reasons why, but they haven’t really found the right one. So it didn’t grow properly. I walked around with a straight leg, didn’t have a knee joint. And then when I was 16, I was like, ‘Just get rid of it. Cut it off. Had enough of it.’ It held me back everywhere. It was completely my choice. That was several years ago. From then on it’s been all uphill, just good. I definitely felt like it held me back, so as soon as it was gone, I felt freer, lighter.

Martirosyan: That’s a major operation, great it worked out. So you have your own gym? What do you do with the majority of your time?

Eyers: Working in the gym. Unfortunately, it’s not my gym, not yet, anyway. I pay rent and I see clients. I’ve been slowly building a client base for a couple of years now, living in Bournemouth in the southwest of the UK. The South coast, along the edge. 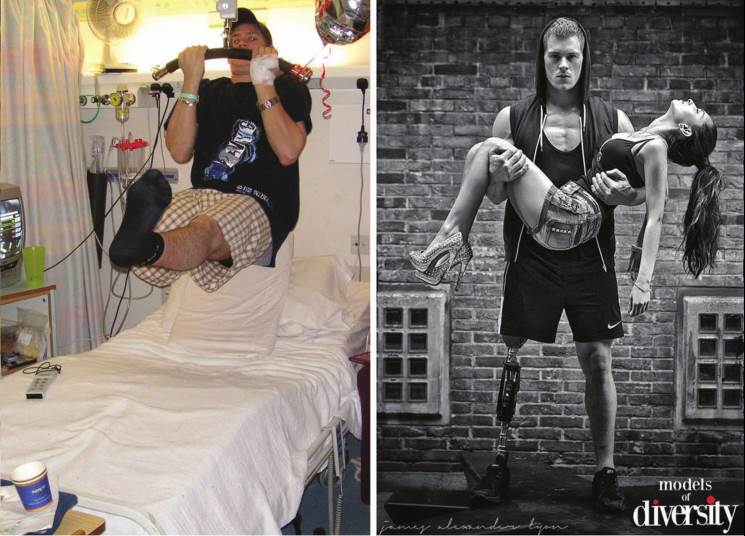 Martirosyan: With modeling, are you trying to take it somewhere, or somewhat of a hobby?

Eyers: I want to take it somewhere.

Martirosyan: Where do you want to take it?

Eyers: Haha! I’ve always opted for the fitness side of things. I’m very, very inspired by it. I’d love to do fitness modeling full-time. I’d love be in some sort of clothing brand or fitness brand. I’ve just been sponsored by NRGFuel supplement company, which is amazing. I’d like to be their face, their big person. But that’s a little bit down the line yet. Recently, Angel’s been pushing me into the fashion industry. We did a photo shoot with Boohoo.com, which is an online clothing line and I really liked it. It’s completely different, but I really enjoyed it. I’m quite open to trying anything.

Martirosyan: Great approach. Are you looking to get with an agency or is it all just independent, doing your own thing?

Eyers: At the minute, it’s just my own thing, but if agency is the next step, then yeah, absolutely. I’m still quite new to it, so I’m just experiencing it, I’m just kind of taking it as it comes.

Martirosyan: Do you get any curious comments when you’re modeling?

Eyers: When I first put some pictures online, with my top off and I was in quite a posed position. A lot of people commented and said they didn’t like it, too much, too this, too that. “Your body doesn’t look very good.” And the flip side of that, other people were saying how perfect my body looked. Bear in mind, they can’t see my leg, they can only see my upper body. Then, I posted another picture and it was my full body and the comments completely changed. People started saying, “Wow, you’re so inspirational, you’ve done this, you’ve done that.” They didn’t look at the muscle, they looked at the body. They looked at achievement. So it’s very, very interesting.

Martirosyan: That’s great. What about other activities, have you ever done any kind of sports?

Martirosyan: What about the Paralympics?

Eyers: I was in the opening ceremony for 2012, which isn’t a sport, it was a big show, basically. We had to learn, like, a circus act, how to climb ropes and things, then tumble down, cabaret style. I spent four months training for that in London. And then we had to perform in front of 80,000 people. So I kind of felt like I was doing a sport in the Paralympics, yeah. I’d like to be in Brazil, when I’ve chosen my sport.

Martirosyan: You’re only 24, so you have some time to explore. Tell us what you want people to know about you.

Eyers: I’d like to think I was quite spontaneous. I’m up for anything. I just go with it, whatever feels good, feels right. I’m always looking for a new challenge, a goal in life. The first part of my life, as you will, when I was a kid, I felt like I was held back because of the leg. As soon as I chose to amputate it, like I said, I’ve now got—the world’s my oyster sort of thing. I’m up for trying anything and everything.