I grew up in New Orleans where the music and culture are so rich that they become part of your DNA. I tried to learn the guitar when I was about 12 or 13, but had a really tough time. Instead, I learned to express the emotions within the music as a tap dancer and ballerina for many, many years.

My son Sebastian is 23 now but when he was 6, I witnessed a powerful demonstration of how music can heal. Back then he had a bad reaction to a medication and came down with Stevens-Johnson syndrome, a potentially deadly skin disease that threatened his life. During the ordeal, his skin burned until it was crispy black and the hospital staff covered the mirrors in his room with sheets so he couldn’t see his reflection. I was told that 99 percent of people with his same condition die.

Sebastian was in the hospital for three months. During that time, he received music therapy. I don’t even know what they were playing; I think it was a percussive rhythm, but they wouldn’t let me stay in his room, so I don’t know all the details. The concept of music therapy was new to me and yet I could see that it clearly soothed my son, which helped him heal. Witnessing that firsthand, I started learning everything I could about music therapy.

It was around this time that I met the legendary music producer Quincy Jones. Back then, he had just bought the TV station where I was working. Oftentimes, a new incoming station owner would fire the general manager and bring in his own person, but he asked me to stay on.

I didn’t know that much about Q before he became the owner. In those days, we didn’t have the Internet, so I sent my assistant to the library to get some background information on him. She had to scroll through lots of microfiche. I had no idea that Q had scored 50-plus movies, won tons of Grammy Awards and worked with countless music superstars. He had also accomplished a great deal as a trumpeter until an aneurysm left him unable to play.

Meeting Q, I noticed that he dripped love from his fingertips, that he was charismatic and that he had a passion for life. For someone of his stature to be so humble and so kind was unusual. I was eager to be part of his team.

I ran his TV stations both in Atlanta and New Orleans for 11 years. The one here in New Orleans was near the Iberville Projects, which have since been torn down. As tough as that housing project was, I remember Q’s advice: Never underestimate the power of kind words or a hug.

The parents in that place wanted so much for their children. They would be in tears and say, “Please help me do something. Please help me create a safe Halloween for my kids.” Through our TV stations we did everything we could to highlight the kids who were doing remarkable things. We reached out to them and I always felt Q’s compassion for them.

Nineteen years after we first met, Q asked me to come back and run his foundation, the Quincy Jones Musiq Consortium (QJMC). I saw it as an amazing opportunity to bring people and administrators in music education under the Q tent. We started off working with just four cities: Los Angeles, Boston, New York and New Orleans. We now have partners all over the country, connecting the dots through music. We get people to collaborate, share resources, innovations and ideas. We’re introducing them to potential funders. We put together two summits a year, bringing the best and brightest people together to learn from one another.

Some live in the same city and have never collaborated or even met. Now they’re sharing resources, programming opportunities, rehearsal space and programmatic concepts. A person in LA is now working with the University of Miami and someone in New Jersey is working with people in Dallas and Syracuse. Representing the Quincy Jones brand allows me to enter any door and ask for assistance.

One of the people we connected with in New Orleans is Derrick Tabb, the drummer from the renowned Rebirth Brass Band. He’s taken kids from around our city who are up against the harshest circumstances and brought them together. He recruited a college student to help the youth with their homework and improve their grades, while enrolling them in intense music education at the historic Cabildo, a museum in Jackson Square. It’s a grand building that used to be the seat of power in New Orleans until the mid-1800s. Now Derrick uses it as a rehearsal and performance space.

Derrick’s not just teaching high-level music education, he’s saving lives. Kids are in his classes instead of getting into something that could hurt or kill them, or get them trapped behind bars. Some of the youth come from abusive homes, but when their parents attend their children’s concerts and they see the beauty their kids create with music, it makes them back off. For everyone involved, the experience creates more peace and joy.

Q’s vision from the start was to give something back to New Orleans, the city that has given the world some of its greatest musicians: legends like Louis Armstrong, Jelly Roll Morton, Buddy Bolden and Wynton Marsalis, as well as one of the world’s greatest art forms, jazz. 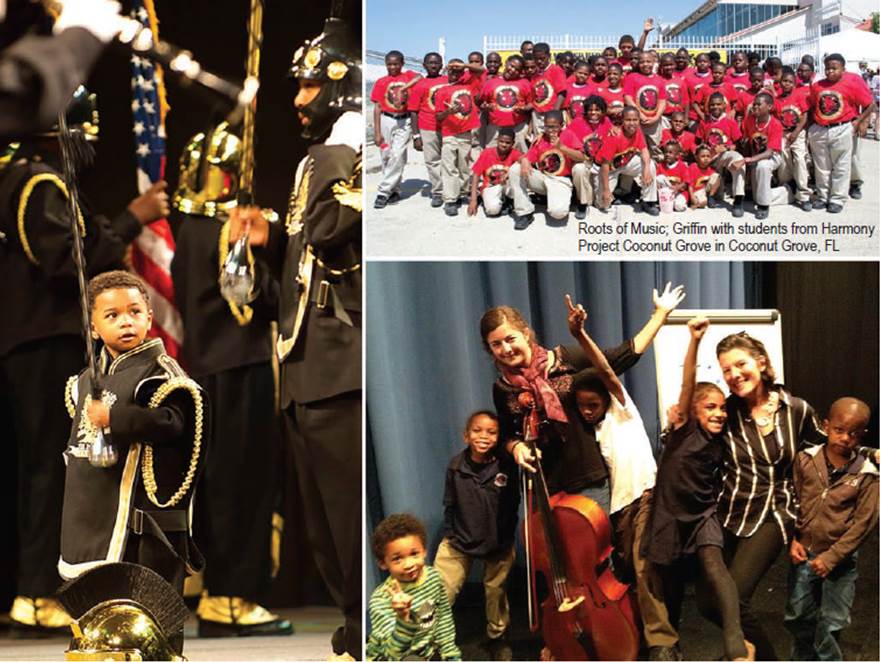 We’re also reaching out to other cities through QJMC. There’s Little Kids Rock in New Jersey; Berklee City Music in Boston; and Harmony Project in South Los Angeles. We now have affiliate programs in cities around the country. We work with more than 175 community and organizational leaders in 35 cities across the United States to transform children’s lives through the gift of music education.

If we could just bring every government and school official, every possible funder and have them sit in on these classes in the poorest and most underserved areas for just 20 minutes, they would see the difference in the hope and joy that this experience inspires and I don’t think we’d be in the situation that we’re in now in terms of losing arts education.

One of our partners in QJMC is the former chief executive officer of the Guitar Center. We’re creating a ninja force of inspiring music teachers. A great music teacher can make a student so excited that they play like their hair’s on fire.

The power of music can move you from your world into another universe. If you need energy, it can give you energy. If you need peace, it can give you peace. If you need love, it gives you love. It has an effect on your body, mind and soul. I’ve seen it in the life of my son and in children who have nothing but misery in their lives. It’s such a shame to see that so many educators and administrators don’t understand that. They focus on math and science while, as a nation, we’re rapidly losing our creative edge.

In the days when Q worked consistently as a music producer, he had a sign posted on the studio that read, “Leave your ego at the door.” He leads by example, leaving his own ego by the door. It’s been an honor and a pleasure to come back to help him. Music saved his life when his dad moved the family from a tough neighborhood in Chicago to Seattle. When young Quincy put his hands on the piano keys for the first time, it was a pivotal moment. Then he met the incomparable Ray Charles and the rest is musical history.

Now, through the QJMC, we want to make sure every American child knows their musical roots. When Q and his generation of musicians pass on, they want to make sure that all the great music this country has created is remembered, treasured and passed on.