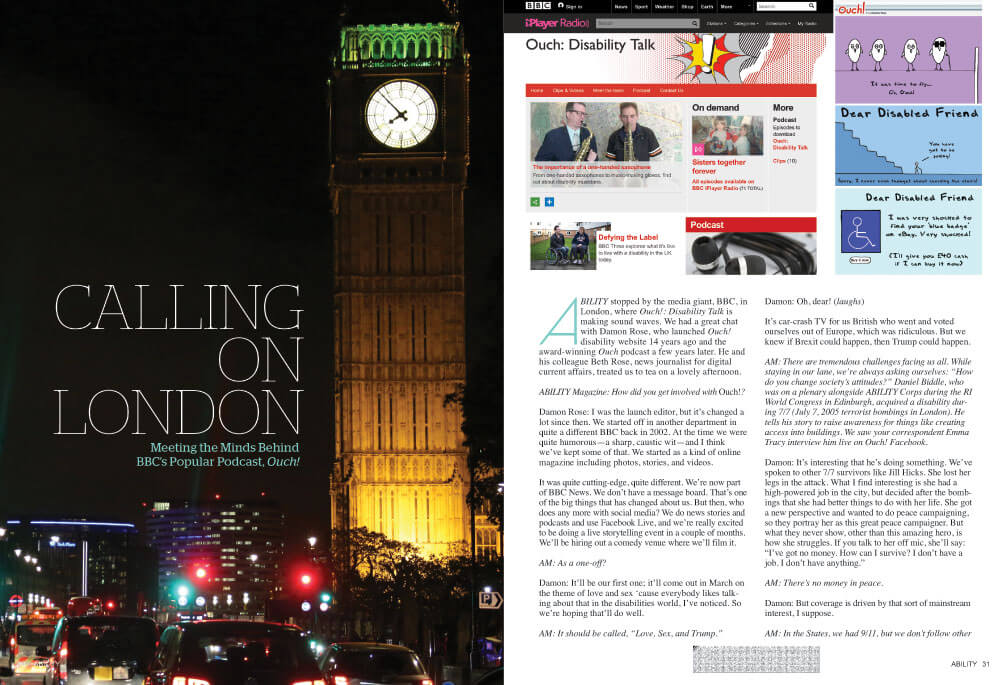 ABILITY stopped by the media giant, BBC, in London, where Ouch!: Disability Talk is making sound waves. We had a great chat with Damon Rose, who launched Ouch! disability website 14 years ago and the award-winning Ouch podcast a few years later. He and his colleague Beth Rose, news journalist for digital current affairs, treated us to tea on a lovely afternoon.

ABILITY Magazine: How did you get involved with Ouch!?

Damon Rose: I was the launch editor, but it’s changed a lot since then. We started off in another department in quite a different BBC back in 2002. At the time we were quite humorous—a sharp, caustic wit—and I think we’ve kept some of that. We started as a kind of online magazine including photos, stories, and videos.

It was quite cutting-edge, quite different. We’re now part of BBC News. We don’t have a message board. That’s one of the big things that has changed about us. But then, who does any more with social media? We do news stories and podcasts and use Facebook Live, and we’re really excited to be doing a live storytelling event in a couple of months. We’ll be hiring out a comedy venue where we’ll film it.

Damon: It’ll be our first one; it’ll come out in March on the theme of love and sex ‘cause everybody likes talking about that in the disabilities world, I’ve noticed. So we’re hoping that’ll do well.

It’s car-crash TV for us British who went and voted
ourselves out of Europe, which was ridiculous. But we knew if Brexit could happen, then Trump could happen.

AM: There are tremendous challenges facing us all. While staying in our lane, we’re always asking ourselves: “How do you change society’s attitudes?” Daniel Biddle, who was on a plenary alongside ABILITY Corps during the RI World Congress in Edinburgh, acquired a disability during 7/7 (July 7, 2005 terrorist bombings in London). He tells his story to raise awareness for things like creating access into buildings. We saw your correspondent Emma Tracy interview him live on Ouch! Facebook.

Damon: It’s interesting that he’s doing something. We’ve spoken to other 7/7 survivors like Jill Hicks. She lost her legs in the attack. What I find interesting is she had a high-powered job in the city, but decided after the bombings that she had better things to do with her life. She got a new perspective and wanted to do peace campaigning, so they portray her as this great peace campaigner. But what they never show, other than this amazing hero, is how she struggles. If you talk to her off mic, she’ll say: “I’ve got no money. How can I survive? I don’t have a job. I don’t have anything.”

AM: There’s no money in peace.

Damon: But coverage is driven by that sort of mainstream interest, I suppose.

AM: In the States, we had 9/11, but we don’t follow other people’s issues too much. We’re self-centered like that.

Beth Rose: We can’t get away from the US news at the moment. It’s dominating everything over here.

So you had a publication at one time, or was it always an online publication?

Damon: Just online. I launched Ouch! in 2002, but I originally came from the BBC’s Disabilities Programs Unit, where somebody made a couple of TV shows regularly. So Ouch! was born out of that.

AM: Did you come up with the name?

Damon: I did, in the shower one morning, after flippin’ months of trying to find something that would work. It’s tough to come up with a disability name that works!

AM: We would love to unite all of ABILITY publications under one umbrella, to see if we can’t create an even bigger voice. Chats are initiated, but go silent after a while.

Beth: It would be interesting to collaborate.

Damon: And we’re hooking up with Australian ABC.

AM: In New Zealand there’s a really good one worth talking to called AttitudeLive. They have a lot of video content around disability. Partly funded by the government.

Damon: One of my ambitions is to make an international network of our podcast. As you’re also hinting at, there’s a lot of shared international stuff around disabilities, garnering a bigger audience and getting some very similar messages out there.

AM: It would help a lot if we looked beyond our own borders, such as ABILITY’s partnership with China, for example. Meeting with a counterpart publication in Beijing and doing a content exchange. Perhaps podcasts are next. Let’s talk.

Damon: Would you like us to come to California and do your podcast?

Beth: For three months, during winter?

AM: We should coordinate your coming in March for the International Conference on Assistive Technology (CSUN).

Damon: Oh, CSUN! We could do something and get you on our podcast. When the presenters are here, not us. We’re nobodies.

AM: So you started Ouch! and since then you’ve become a nobody?

Beth: There are only three and a half of us, normally.

AM: Are you the half?

Beth: I’m not. Our person in Scotland is three-quarters, and then there are our presenters. They just come for a day in December when we record.

AM: What is your agenda?

Damon: We have so many different agendas. Our aim is to make everything we produce mainstream enough to get it onto the front page of the BBC News. The more niche, the less likely anyone will read it, because it’s not going to get promoted.

AM: Do you try to figure out what the market wants?

Damon: We know personal stories go down really well. We ran an article the last year, for instance, about a woman who’d gone blind because she got diabetes as a young person and didn’t look after herself. That went down really well.

Beth: There was my story about a boy who they thought didn’t have any cognitive abilities, but he managed to speak to his parents for the first time when he was 17. That was a real emotional one and got about a million hits. We did one about a professional footballer, a girl, who had to give up her career a day before she turned 20 when she was diagnosed with multiple sclerosis.

Damon: Emma’s just finished her piece on quick-packs that she’s been putting together.

Beth: It’s about the things that people carry in their bags. For example, there’s a guy who uses tennis balls for a muscular problem. A woman with cerebral palsy uses a wooden spoon, I think, to help keep her ankles straight.

Damon: What’s so wrong with a shoehorn? We’ll see how that goes down.

Beth: There’s an American charity called Magic Wheelchair, and they create amazing 3D costumes for children in wheelchairs. It was a Halloween story.

AM: Too scary for us. (laughter)

Is it more difficult to figure out how to do the stories with humor? Are the two hosts funny enough to pull it off?

Beth: Oh, yeah, they’re genuinely very funny. I think probably in years gone by it was a bit more—

Rose: Yeah, close to the bone.

Damon: Our presenters are very funny, very grassroots. Liz Carr is a stand-up comedian and an actress on a prime-time TV drama here called Silent Witness. And Matt Fraser was in American Horror Story last year.

The TV show Speechless is the new thing, isn’t it, on NBC?

AM: Yes, and so far it’s good. Do you have any ideas of where you might be going in the next phase?

Beth: We’re going into more video and hopefully into more collaborations with other big departments. One project is geared towards working with 16- to 30-year-olds, maybe for videos or audio on a story like “The Seven Things You Should Never Say to Someone With Autism.”

And then we’ve got heavier subjects like BBC Panorama from our premier investigation team. We’re all involved in this one big team. The idea is there will be much more collaboration. And certainly there’s a willingness to generate more mainstream ideas. That’s the way it’s moving at the moment. There have been quite a few changes in the last year. It’s a very new, mixed department called Digital Current Affairs. They do quirky documentaries.

Damon: Aimed at a young audience.
Beth: It’s just online. That’s where the audience must be, which is quite interesting. You have to create a big enough stir about it.

AM: So the videos you’re looking at might only be online?

Beth: Most of them. Some of the top stuff, the longer documentaries, we’ll work with BBC One, but most of them just live online.

Damon: Some of the videos we produce make it onto TV as well, like on the breakfast news or the BBC World News channel. We’re in an usually privileged position for a disability station where we can be very mainstream if we commission the right thing.

AM: Looking forward to collaborating and helping push the message.

Beth: It would be nice if we could do something.

AM: Have you heard of Andrea Tyrimos? She has an art exhibit called “Bipolar Picasso.” ABILITY is featuring her story.

Beth: You beat us to it! 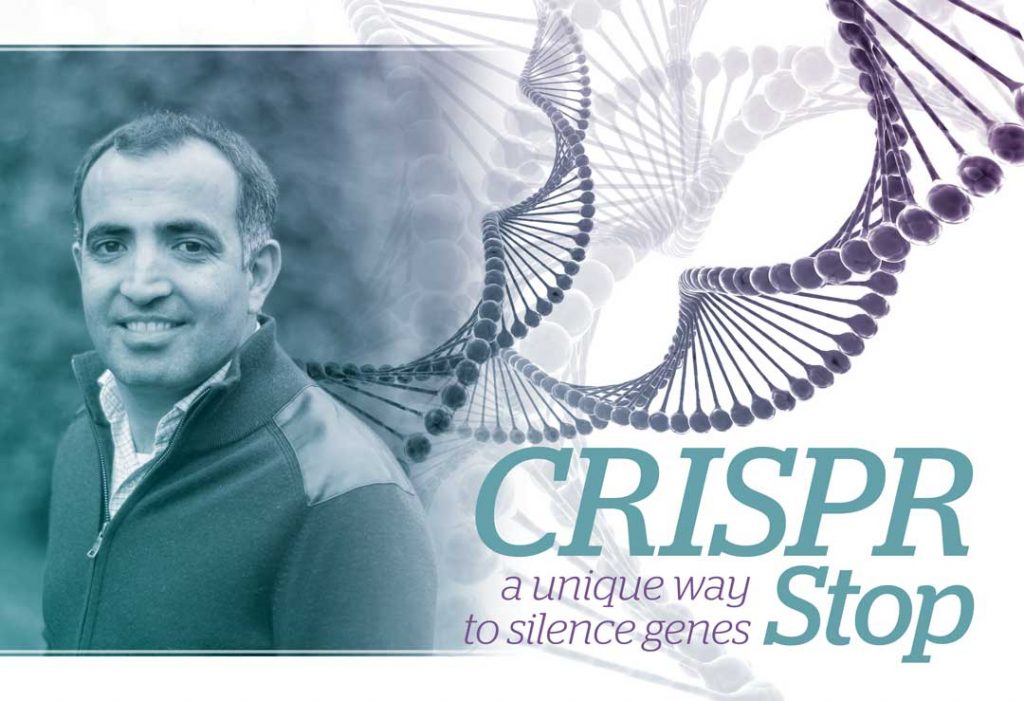