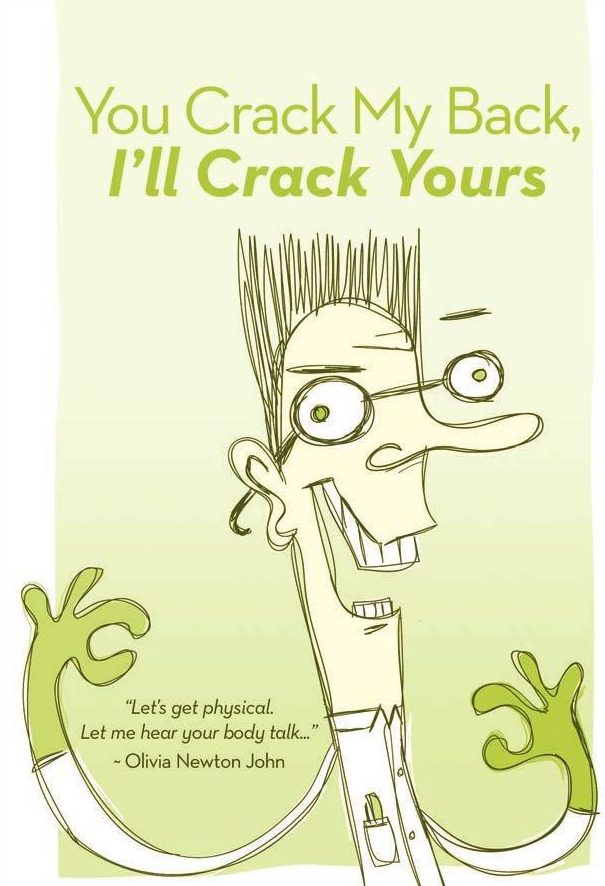 Snap, crackle and pop is not just the sound you hear when you pour milk into Rice Crispies, it’s how your body talks during physical therapy (PT). Actually, after a rigorous session of being man or woman-handled, it’s quite like
ly that you’ll lack the strength to talk. Many disabled people are all too familiar with the world of PT; we’ve done our time.

PT was first recognized by the American Medical Association as a legitimate form of abuse—I mean treatment—in the early 1900’s. PT has roots in both the Latin and Greek languages. The Latin being painoneous and torturellia, while in Greek it’s derived from the words punishamento and tormentia.

PT gained momentum when it was discovered that exercise could strengthen deteriorating muscles and reestablish former capabilities. Henry Grabner of Palm Olive, FL, demonstrated the incredible potential of this technique when he lacerated his forearm while working at a pickleslicing machine in a factory. As a result of nerve damage, he was unable to move his fingers. But after months of PT, he was not only able to go back to his pickleslicing job, but also to pick up a baseball and throw like a girl. It was remarkable

Soon Grabner’s recovery exceeded even his doctors’ wildest dreams, as the pickleslicing, ballthrowing wonder exhibited uncanny dexterity during a two year pursesnatching spree. Thanks to PT, Grabner now delights his fellow inmates with a shadowpuppet show against prison walls as he awaits parole.

What does it take to be a physical therapist? A strong desire to help people, a strong mind, and a strong back. Since most of the patients in PT don’t have the mobility to get from one place to another, their therapist is often required to lift them and situate them in an apparatus before the session begins. The therapist must perform this function because the room is too small to accommodate a tractor with a threequarter inch plate and/or a forklift.

MORE BOUNCE TO THE OUNCE

Nearly a century after PT came into common use, a 1989 earthquake devastated parts of San Francisco’s Bay Area. Early reports suggested a shift in the San Andreas Fault. However, upon closer inspection we learned that several fledgling therapists accidentally dropped a morbidly obese lady while transferring her from wheelchair to mat. This seismic event clocked in at 7.1 on the Richter Scale, one point for each of the seven petrified therapists as their arms gave way.
Lifting ability may be the top requirement of an upandcoming therapist. As a matter of fact, six months of a PT’s training involves pumping iron at Gold’s Gym. Many PTs have even gone on to win bodybuilding contests. If lifting is done improperly, the role of a therapist may be relegated, in life, to that of therapee.

Almost every hospital is equipped with a PT department. Within it are various torture racks—I mean apparatus—to improve a patients’ condition. The department also has a large supply of mats. They are intended for patients’ use, but also do double duty when the therapist needs to catch 30 winks before the next patient arrives.

No PT department would be complete without parallel bars. For some reason, these tend to symbolize the success of taking a first step into a new life of walking and independence. (Unfortunately, most places in the outside world are not yet equipped with parallel bars, thus making walking rather hazardous except within the PT environment itself.) Walking is also limited there, as well, since the bars are only eight feet in length. However, you can never go wrong hanging around in these bars.

A walker is an essential tool, as well. This is the bridge from wheelchair to independent walking. The therapist is there to make sure that the patient does not “fall off the bridge.” A walker has four legs on the bottom with a metal bar to grab at the top to steady the patient. This useful device was invented by an alcoholic named Amber Layten.

One afternoon, as Amber bicycled from preHappy Hour to Happy Hour—two events he rarely never missed—he rounded the corner and was forced to swerve to avoid running over Miss McWiggins. The near catastrophe caused him to crash through the front window of a pub. His bicycle collided with a barstool. With his handlebars permanently implanted in the stool, Amber now had a convenient device to steady him for his inebriated journey home. Thus the origin of the “Amber Layten” walker was born. Of course, Mr. Layten himself didn’t test out the new invention until after last call.

HOW THERAPISTS GET CRACKIN

While a therapist gets roughly six years of schooling and a oneyear internship, most are not adept at understanding the limitations of each muscle and bone. Therefore, a shriek by the patient is extremely helpful. If stretching isn’t done, or is performed adequately during the immobilization period, the patient can face severe consequences down the road. Ask baseball pitcher Joe Hocker.

Known to his teammates as “Spitfire,” Hocker was involved in a serious cart accident. During a game against the Ohio Buckteeth, he suffered whiplash on the way out to the mound, when his cart accidentally ran over the team mascot, Freddie “The Dancing Trout,” instantly killing him.

At Shucks Stadium, a 30foot toilet was erected in center field, where Freddie’s life was memorialized, followed by a ceremonial flush. The crowd was silent, but still managed to do the wave. Hocker, on the other hand, faced challenges with getting treatment because each time his therapist tried to stretch his injured neck, he inadvertently spit on her. One night, Hocker dreamed that he was in the World Series, but he never awoke to fulfill his dream, the old “Spitfire” having drowned in his own saliva.

Sportsrelated injuries are quite common in the United States. It’s not unusual to find PT departments literally crawling with athletes, exathletes, macho men and husbands trying to prove that they’re not over the hill. The therapist is most sympathetic to the latter.

Aquatic therapy is used quite extensively for therapeutic purposes as a means of developing motion and strength within a nongravity environment. Pool therapy was widely used during the years when polio infected the central nervous systems of young children causing paralysis. Although most children didn’t realize the severity of the disease at the time, they worked hard to regain their strength and managed to find time to play in the water.

One of the games invented was by a 7yearold boy named Markie Owens. The object was for one person to close their eyes and yell “Mark O,” and then try to find the other players when they answered “Polio!” This game is still played to irritate people who work hard all year and wish to have one quiet day by the pool.

An Olympic sport was derived from this pool therapy. In 1938, 4yearold Sally Mander was in her wheelchair next to the pool waiting for her therapist Olga, a Hungarian immigrant who’d been trained in men’s shot putting. Suddenly Sally went off the deep end, slithered into the pool and began to drown. Olga, arriving just in time, dove in the water, hoisted Sally on her shoulder, and heaved her onto dry land. Unfortunately, Olga did not realize her own strength, and threw the small child across the street into the net of a nearby soccer goal. Spectators marveled at the feat and started a neighborhood league that rapidly spread throughout the country; the new sport was called Water Polio.

PT has come a long way since the late 1930’s. We now know more about the human body and how it works than ever before. Many new techniques and treatments have been introduced. Among them is Functional Electrical Stimulus (FES), which helps the inactive muscle contract without the patient’s cognitive process needing to be involved. FES helps prevent muscle atrophy and/or osteoporosis, the decaying of bone tissue.

Electrodes are placed in precise spots on the dormant muscle, while a current of electricity is shot into the flesh. This handy technique also led to the invention of the electric chair ™. The therapist adjusts the voltage by an exact measurement known as the EBF (Eye Bulge Factor). After shock therapy, the patient is sent to Miss LaWanda’s hair salon so that the hairs standing on end can be styled into an attractive coif.

Therapists and the patients work closely together. Sometimes too closely. Occasionally, PT and patient fall in love. Some early signs of this include: 1) bedside sessions that occur more frequently; 2) a patient is scheduled for eight hours of therapy a day; 3) therapy takes place in the hospital linen closet. Perhaps the most overt signal that the patient/therapist relationship has crossed professional boundaries is when the therapist wears a thong bikini and is found astride the patient’s back, delivering deep tissue massage.

All in all, PT has done wonders over the years. It’s often taken the “dis” out of disabled; helped millions of people to get back on their feet again so that they can walk to the refrigerator, engorge themselves, and then sit on their butts watching cycling through TV channels on the remote.

PTs should be admired for the fantastic job they do— they listen to ungrateful patients moan, groan, ache, cry and whine, which is why they are so motivated to get their patients up on their feet and out of the hospital stat.