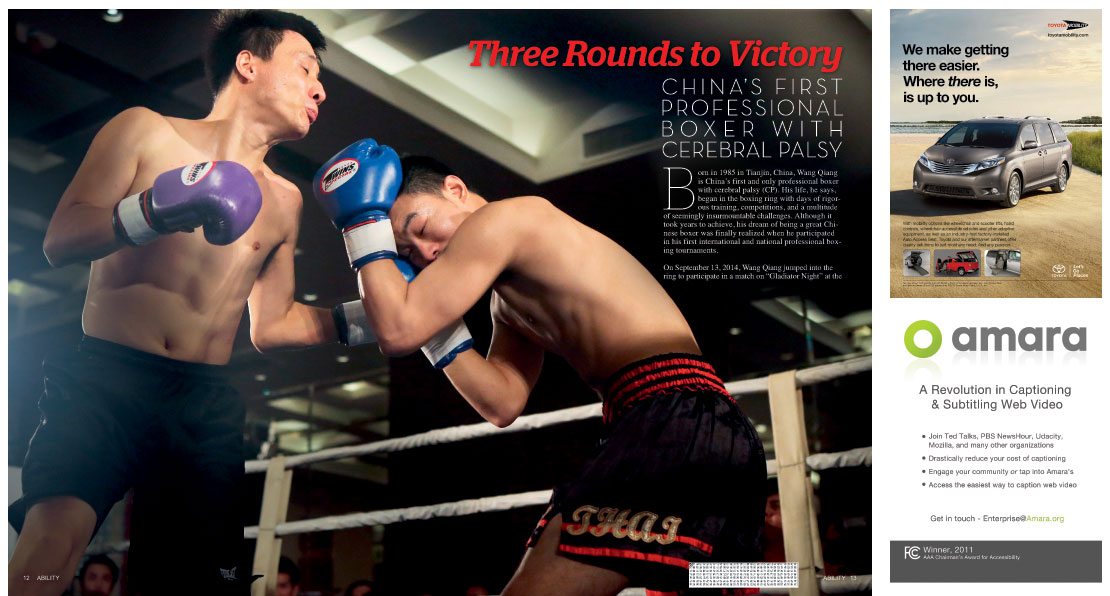 Born in 1985 in Tianjin, China, Wang Qiang is China’s first and only professional boxer with cerebral palsy (CP). His life, he says, began in the boxing ring with days of rigorous training, competitions, and a multitude of seemingly insurmountable challenges. Although it took years to achieve, his dream of being a great Chinese boxer was finally realized when he participated in his first international and national professional boxing tournaments.

On September 13, 2014, Wang Qiang jumped into the ring to participate in a match on “Gladiator Night” at the Fourth International Boxing Tournament in Shangai. After Wang Qiang’s name was announced, he faced the audience and showed several quick boxing moves. The audience roared, cheering him on.

As a bright yellow light lit the ring, the two boxers engaged in three long, fierce rounds. It was an evening in which the sport of boxing was vividly on display: waves of cheering fans surrounded the boxers, who showed amazing physical strength, their body’s glistening with sweat and the unpredictable urge to fight.

Although Wang Qiang lost the match, the winner reached out to give him a big hug at the end. Wang Qiang was excited and raised both hands high in victory, as if he’d won the match. He kept repeating, “I’m ok. I’m ok.” It was a legitimizing moment for the 29-year-old boxer. Wang Qiang had waited nearly 17 years for this experience: his first opportunity to participate in an international professional boxing match. This was also the moment he became the world’s first professional boxer with CP. 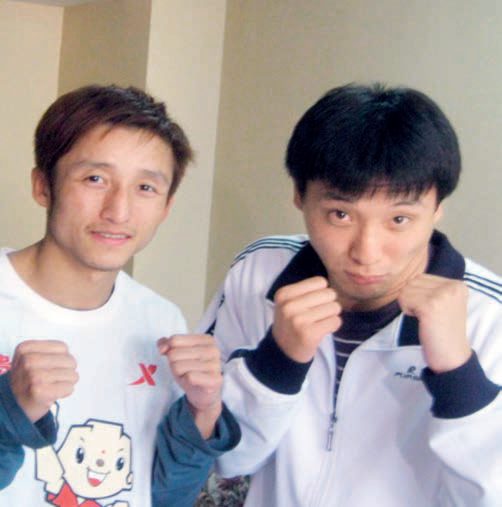 A Long Road to the Boxing Ring

Wang Qiang had been born prematurely and suffered from multiple illnesses early in his life: a cerebral hemorrhage, an intestinal obstruction, and bouts of jaundice and pneumonia. He was six years old before he could stand, walk, or speak.

His childhood was difficult, to say the least. He suffered at the hands of bullies, who called him names, chased and mistreated him. In an effort to protect him and improve his physical strength, his father, a part-time boxing coach in the Tianjin Armed Police Corps, introduced him to boxing when he was 12.

Despite the strenuous training, Wang Qiang was determined to become a great champion. Gradually, his body became more flexible; he learned to ride a bike and do housework. During his spare time, he organized a blog called “Patients” for people like himself who had physical challenges. He also volunteered as a boxing coach for a local, special-needs school.

But he remained deeply frustrated because no professional boxers wanted to fight a boxer with a disability. Since the Paralympics didn’t have a boxing category, Wang Qiang could only participate in amateur matches with able-bodied boxers. But each time he registered for an amateur match, his disappointment deepened. Although he signed many waivers, the organizers believed he was not suited to fight because he had CP.

Instead, coaches invited him to help train other boxers, but this was unsatisfying to him. His mother, in particular, felt sorry for him. “My son is very naïve,” she said. “He has nose bleeds after sparring.”

But his dream proved more resilient than his physical limitations. Wang Qiang was determined to face his challenges no matter what; boxing, he believed, was his fate. He simply had to continue pursuing his dream. In 2006, when he was 21 and had developed excellent boxing techniques, he was officially hired as a coach for the Tianjin Elong Boxing Team. With his father’s help in 2007, he opened a boxing club after he graduated from a vocational school. Two years later, after his club became well known, he challenged the Olympic boxing champion Zou Shiming online.

Zou Shiming refused to fight Wang Qiang, but did invite him to attend the First National Boxing Tournament match. The Olympic champion spoke encouragingly to the young boxer: “Brother Wang, you’re strong and brave. You inspire me! I believe we are boxing athletes with strong fists who will lead great lives!”

In early 2014, the famous Chinese boxing coach Han Hongqiang was so impressed by Wang Qiang’s story that he decided to make an exception and coach the boxer without pay. Finally, Wang Qiang was close to reaching his dream. On December 21, 2014, Wang Qiang participated in his first National Boxing Association match. Before the match, audience members chatted eagerly about him. He felt content and full of hope. After winning the match, he became China’s first 124- pound champion with a disability. His dream, he said, finally became a reality.