This will be their first World Games as a team, and their first time to Los Angeles. While they have sailed in the ocean, they’ve never sailed in the Pacific. And although they usually steer a catamaran on a lake in their home state of Georgia, the World Games requires the use of a boat with a single hull.

But they probably have a joke for all of that. “We always want to do our best, but we don’t want to let the tension build up to where it’s overwhelming,” Kirkland said.

Kirkland, 28, and Crofton, 33, share an easygoing attitude that works well with the unpredictability of the wind. When they meet with about a dozen other athletes and Unified partners on Lake Tobesofkee in Macon for practice, there are times when the wind is on their side. In those cases, Crofton is at the front of the boat controlling the jib sail as Kirkland steers and helms the main sail. Both men listen attentively to the other in order to coordinate their speed and direction. When the air is still, and there are no ripples on the water, that’s when the mood changes from serious to lighthearted.

“If there’s a lot of wind, you get to have a blast and sail —sail fast, and sail well. If there’s not that much wind, then you get to hang out and talk,” Kirkland said. Discussions can vary from motorcycles and cars to punch lines with animal sounds. There are also the many times they’ve jokingly recreated the famous Titanic scene by yelling out, “I’m flying!” with their arms outstretched. According to their assistant coach, Debbie Parrish, it’s this type of brotherly friendship that makes their teamwork so effective. 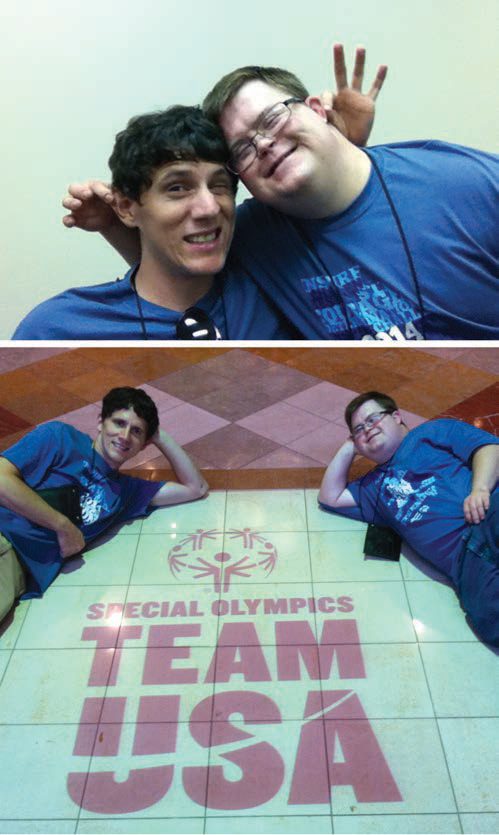 “John is a really nice guy, he’s really awesome. He learned sailing from me,” Crofton said, laughing. Crofton has been involved with Special Olympics since he was three-years-old, and he’s competed as an athlete in events ranging from swimming and boxing to bowling and tennis. He learned how to sail five years ago, and considers this sport to be his favorite. His Unified partner (a teammate without intellectual disability) became a volunteer in 2013, after he and some friends saw the sailboats on Lake Tobesofkee and he was curious enough to ask about them. So, maybe Crofton’s joke about teaching Kirkland isn’t too far off.

“I just call it a win-win situation. I get to learn how to sail, which is pretty cool, and I also get to help out with Special Olympics,” Kirkland said. “It’s a good opportunity to meet people. Sometimes you feel like you’re getting more out of hanging out with all the Special Olympics athletes.”

When they speak about the upcoming World Games, Kirkland and Crofton

list their goals in relation to the other person’s happiness. Crofton is excited to make new friends, but he also wants his teammate to have fun. Kirkland said that he’s working hard to make sure that Crofton has a lifelong memory. Both joke about what it would be like to win.

“We do it together. That’s what a team is all about,” Crofton said.