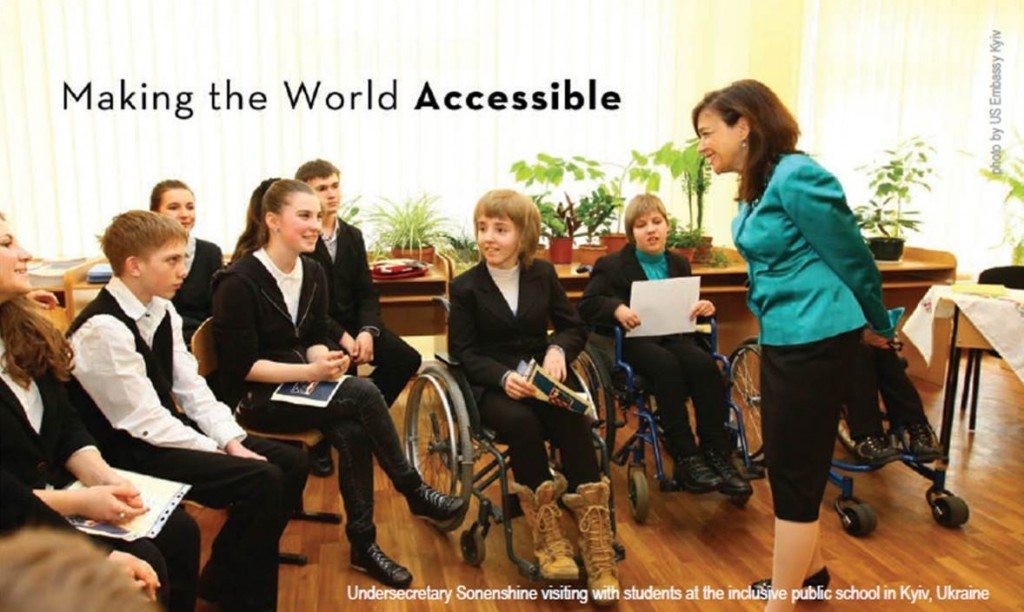 The Department of State (DOS) in Washington, DC, recently invited ABILITY Magazine for a visit. There we witnessed strides toward inclusion of people with disabilities and the impact the United States is having around the world. We were hosted by the Bureau of Educational and Cultural Affairs (ECA), which is best known for promoting understanding through such programs as the renowned Fulbright Scholarship and the Future Leaders Exchange.

While in DC, we attended the opening conference of EMPOWER, the first ECA professional exchange program to specifically promote the rights of people with disabilities around the world. This 18-month project consists of four grants awarded to US-based organizations selected to further American values of inclusion, accessibility and the rights of people with disabilities worldwide.

Each US organization hosts professional fellows from various countries who have disabilities and/or who work with individuals with disabilities. Americans reciprocate with a visit to those countries to learn about how their counterparts deal with the same issues abroad and to assist with projects that further the goals of promoting human rights globally.

EMPOWER’s participating organizations will complete their local, regional and international exchanges at various times during 2013. Two local projects are Discovering Deaf Worlds, which works to identify creative solutions for deaf communities in the Philippines; and Global Deaf Connections, a training program where educators from Gallaudet University in Washington, DC, help train educators in Uganda, East Africa, to include deaf and hearing children in their after school programs.

The American Councils for International Education organized a program on the regional level, which focused on South Central Asia with participants from Kazakhstan, Kyrgyzstan, Tajikistan and Pakistan, who sought to gain understanding of inclusive practices, management, adaptive technology and advocacy. In turn, their American colleagues will later travel to those countries to assist in implementing projects developed during the program.

Mobility International USA (MIUSA) is also gearing up to complete their global program this year. Twenty domestic organizations joined with representatives from disability rights groups in 20 countries. The US representatives will first visit those places, stretching from Argentina to Ethiopia to Nepal. Then representatives from those countries will reciprocate by coming to the US to participate in various programs and projects around access, inclusion and opportunity. They will carry the insights they gain back to their respective countries.

The EMPOWER program allows organizations to learn about the quality of people with disabilities around the world and “to help them advance their work. It will identify emerging leaders and create a bigger network of alumni,” says Judy Heumann, longtime advocate and the DOS special advisor for International Disability Rights. She hopes international participants take some of what they learn and apply it as it makes sense for their needs and home communities.

Heumann, who has more than 30 years’ experience working in the disability arena, says the global paradigm is shifting from a charity model to an equal rights issue. She hopes participants will advance the rights of people with disabilities and become part of reform movements within their countries. These efforts can serve to advance democratic principles and build momentum to implement the Convention on Rights of Persons with Disabilities in every country around the world.

“The US government is sincerely interested in ensuring that people with disabilities have opportunities to participate in all the work we do at the Department of State,” she said. “From the Fulbright Program to the International Visitors Leadership Program, we’ve seen an increased number of people with disabilities become involved.” She said that US embassies around the world are directed to reach out to the disability community and become aware of its needs and concerns. Disability inclusive diplomacy is a key element of ECA’s exchange programs as well as all State Department programs.

On the day of ABILITY Magazine’s visit, Heumann, along with Tara Sonenshine who is the undersecretary of State for Public Diplomacy and Public Affairs, held an international web conference to reach out to all US embassies and consulates around the world, responding to their questions and concerns as they seek to serve people with disabilities.

Sonenshine sees this matter as part of the DOS’s role in sharing American values of inclusion, tolerance, pluralism, democracy and human rights. “So this issue of disability rights is a natural part of public diplomacy,” she says, adding that Secretaries of State Hillary Clinton and John Kerry also deemed this agenda as having great importance.

Sonenshine holds disability issues in the forefront of her mind: “I’ve made it a point whenever I travel to seek out people who work in this area and to ask what our embassy in that place is doing.” On a visit to the Ukraine, she saw firsthand the embassy’s support and investment in inclusion through a thriving school that mainstreamed children with disabilities.

In communities around the world, the undersecretary’s office has three main strategies: to ensure unique programs for and about people with disabilities, to make all programs accessible and to provide funding for local needs.

Sonenshine highlighted American Spaces, which are US-sponsored venues where community members can convene around the world. One such place is the Swaziland National Library in southern Africa. The DOS has partnered with them to help provide assistive technology and Braille materials. In Tanzania, an exchange participant was awarded a grant for an accessibility renovation and educational material for a local space. 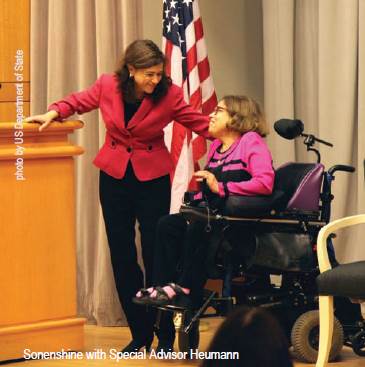 A common outcome of program participants visiting the US has been to see what is possible and to integrate their experiences to affect change and quality of life in their communities. This has now become an ongoing theme for the International Visitors Leadership Program. An American Space in Mombasa, Kenya, for example, uses the internet to help people who are deaf or hard of hearing use sign language and new technologies. A Burmese woman brought the first wheelchair basketball program to her country after observing a similar program in the US. The DOS also sponsored the first ever Sports Envoy Exchange Program for athletes with disabilities in Guangzhou, China.

Since the Americans with Disabilities Act was passed in 1990, the DOS has played a role in seeing this legislation implemented.

Marge Plasmier lives in the Washington, DC, area and works with ABILITYJobs.com, the first and largest site dedicated to helping talented people with disabilities find employment within companies, governments and the non-profit sector.

Bureau of Educational and Cultural Affairs
The Fulbright Program
U.S. Department of State